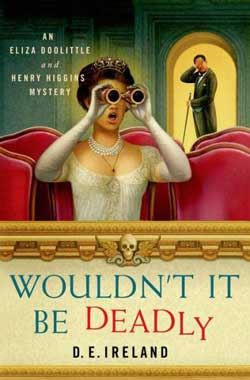 Wouldn’t it be Deadly by D. E. Ireland is a historical mystery series debut, featuring Eliza Doolittle and Henry Higgins, that picks up where My Fair Lady left off (available September 23, 2014).

Many of us know the story of Eliza Doolittle and Henry Higgins from the play Pygmalion by George Bernard Shaw, which was made into the movie My Fair Lady. From the original story we know that Henry Higgins used his mastery of phonetics to teach Eliza Doolittle, a Cockney flower girl, to speak properly and even passed her off as a duchess at the ball. D. E. Ireland takes the story from here, and creates one of the best new traditional mystery series I have had the pleasure of reading this year.

Once Eliza completes her transformation, she decides to leave Professor Higgins and his good friend Pickering , and get a job teaching phonetics lessons. She becomes the assistant to Higgens’ rival, Emil Nepommuck. Higgins is not happy about the arrangement and when Nepommuck takes credit for Eliza’s transformation, Higgins writes the newspaper denouncing Nepommuck as a fraud. When Nepommuck is found murdered, it’s the unfortunate Higgins who is the chief suspect. Knowing him to be innocent, Eliza feels it her duty to assist the police and prove her friend innocent. The fact that he claims to have been wandering around London listening to accents doesn’t help matters. Since he can provide no solid alibi or anyone who remembers seeing him, and the police are under pressure to solve the case quickly, Higgins is the natural suspect.

As Eliza investigates, she finds that several of Nepommuck’s students had reason to want him dead. It seems that Mr. Nepommuck was blackmailing his students and she just needs to weed through them to figure out which took action to stop the evil man. She and Higgins question the students to learn their secrets, but soon find that they are coming much too close to the solution and are making the murderer nervous.

When I first started to read this book, I thought that I would have an image of Audrey Hepburn playing Eliza in my mind. I quickly found that the author took well known characters, and still managed to make them unique. As familiar as they were, they were also new to me, and I found it interesting to follow them past any events I’d ever read or seen. The characters were extremely descriptive and imaginative. There is also a lot of humor in the story because Eliza can’t help but return to her roots when anxious or mad. Since Higgins seems bent on annoying her, she tends to lose her cool on a regular basis. When this happens, her learned speech patterns quickly revert to their old ways and she just can’t help herself.

Nepommuck gave a dramatic sigh. “She cannot help herself, my dear. Do not let her lovely vowels fool you. Miss Doolittle is only lately come from the gutter.”

“One more word, mate, and I’ll kick your blooming arse!” Eliza clapped a hand over her mouth, dismayed at how easily her speech had reverted to the East End.

“Ah, just as I thought.” Nepommuck looked smug. “Come, Mrs. Finch. I will finish your lesson across the hall. It appears Miss Doolittle has forgotten how to speak the English language properly herself.”

The pair swept out of the room as if they were King George and Queen Mary.

Eliza grabbed a nearby inkwell and reached back to throw it at the door Nepommuck slammed behind him. After a moment, she lowered her arm. She would not lose control again. She was no longer an ignorant flower girl. And she’d see both Higgins and Nepommuck hang before she allowed herself to slip back into her old life. Except at this moment, she wanted nothing more than to sit in her cozy old “piggery” in Angel Court.

“I am a person of discernment and discretion, Maestro Nepommuck,” she said aloud. “And I am an independent woman, Professor Higgins. No matter what either of you think, I deserve your regard and courtesy.”

Then she felt her blood rise at the contempt with which both men often treated her. “I’m a bleeding lady, I am!”

Frustrated, she flung the inkwell to the floor. “Ah- ah- oh- ow- owoh-ow!”

Historical mysteries transport the reader to a different era and allow us to live for a short time in a period we likely know nothing about. The author did a wonderful job of describing 1913, from Higgins’ upscale home in Mayfair to the not so picturesque area known as London’s East End. I found the description of the time period very interesting, from the locale, to the people, to the clothing styles.

The familiar aroma of oranges and onions assaulted her senses the moment they entered the market. Eliza threaded her way expertly through browsing shoppers and crates filled with fruit and vegetables. Despite the late afternoon hour— a typically slow time— most stalls still had produce on display. With the market half empty, few vendors shouted out their wares, but Eliza grinned to hear a distant fishmonger sing out, “Eels! Eels fresh from the river! All large and alive- o!”

One coster looked up from his barrow. “Parsley, miss? Penny a bunch. None greener in London.”

She shook her head. The picked- over specimens weren’t the best that arrived at dawn each morning from the countryside and coast, but they were still decent enough to attract buyers. Those vendors without any customers clustered in small groups near their stalls, chatting and smoking. Eliza recognized many of them. But each time she spoke a greeting to a woman in her market apron or a fellow unloading a crate of potatoes, they responded with a puzzled stare.

Why should they recognize her? Gone were her muddy boots, faded skirt, and moth- eaten coat. Now she wore a pink gown made of a soft material the dressmaker called batiste; its nautical style was said to be all the latest rage. And instead of a soot- covered straw hat she’d fished out of a dustbin, Eliza wore a new boater on her perfectly coiffed hair. The pink silk ribbon decorating her hat cost more than a week’s wage of any flower seller here.

Many times I have finished a book or a movie, wondering what happened to the characters after the last page was turned or the credits rolled. It was a lot of fun to read what might have happened to Eliza and Henry after the ball, and to be introduced to even more characters who were added to round out the new story. I can see that this series will be a hit. These characters have a lot of potential cases to solve and I look forward to reading the next installment.