Please fasten your seat belt while reading this book because it is a wild ride. All I can say is it begins with a bang and by the end all the fires are smoldering, but what happens in between will blow you away.

President Blake Oxley is headed to Texas to campaign for his reelection. All eyes are glued to GNN, the worldwide news network that’s broadcasting from Iraq where the last of the troops are leaving and boarding the USS Elkton to head home. Officially dubbed “Goodbye Day,” the big send off was the brain child of Secretary of State William Bloom, who wanted to take the military edge off of it. All of pomp and splendor is literally blown away when a small boat manned by two mysterious bearded men blows a hole in the Elkton. Now Blake and his National Security Advisor, Sean Falcone, have to decide what comes next. Add to the mix an opposing political candidate who thinks the president is soft on terrorism and you’ve got a recipe for a great political thriller.

I love this insider knowledge William S. Cohen brings to this book. The former Secretary of Defense under President Bill Clinton puts the reader right in the middle of the action, which gives the book a breathtaking pace. I thoroughly enjoyed going through the step-by-step process of discovering the true culprit right along with the president and his staff.

Take this scene, for example, which illustrates how everyone working around the president is forced into multi-tasking mode:

Falcone hit a button and, on the small screen of the small set near his desk, came the handsome, square-jawed face of Senator Mark Stanfield of Texas, who was being touted by commentators as the most likely candidate to oppose President Oxley. National conventions had yet to be held, but an Oxley versus Stanfield presidential race seemed almost certain.

Stanfield’s message was simple: By running for a second term, Oxley was putting the nation on the road to tyranny while also losing the war on terror. Stanfield was calling for a party platform that was little more than his campaign slogan: “Bring Back America.”

Stanfield was leaning forward in a chair on his campaign bus.

A rural roadside was streaming past the window behind him.

“I’ll say again. He was well aware that he was rejecting advice from the Joint Chiefs of Staff. Urgent military advice.”

“Let’s get this straight, Senator,” the GNN interviewer said.

“What exactly happened? What’s so important about the DEFCON order?”

Falcone hit another button to record the interview. He motioned to Dabrowski. “Sit down, Anna.” She chose a chair next to Falcone’s desk, and he was pleased to see that she was not sitting on the edge of her seat.

“Let me put it this way, Frank,” Stanfield said. “DEFCON is the thermometer of our armed forces. It’s the thermometer that shows the level of alert that is needed at any given moment. You’re a general or an admiral—or a colonel or a commander—and you look at the DEFCON and you know how dangerous the world looks to your theater commander. DEFCON Five? Nothing dangerous is happening. DEFCON Four? Just keep your eyes open, buddy. DEFCON Three? Well, suddenly you realize that something may be up.

You don’t know what it is. But you do know about the terror attack on the Elkton. And you wonder, Are we next? What’s happening? You get all your guys and gals at the ready.

“And then, about ten minutes later, you get a new temperature reading. It’s DEFCON Four again. You don’t know why. Well, I know why. The President overruled the Joint Chiefs. That’s why.”

A small screen opened on the lower left of the screen, with the underline PRESIDENT ARRIVES IN DALLAS.

“We’re about to switch to Dallas, where—”

“There’s one more thing, Frank. But I hesitate—”

“Only have a moment, Senator.”

“Well, I wasn’t going to mention this. But when I attempted to call the President about the Elkton, he . . . he hung up on me.”

“That son of a bitch!” Falcone exclaimed, hitting the mute button on the remote. As a shampoo ad appeared on the silent screen, he looked across his desk to Anna and began speaking rapidly.

“Tell Hawk I want everything there is to know about DEFCONs. Tell him I want all the classified material boiled out of a short memo that can be used by the President. I need it in fifteen minutes. Also, put someone in touch with Air Force One and tell them I want—immediately—a classified time line on the DEFCON messages. Have someone else call Kane’s office and get a SecDef classified time line. DEFCON orders are supposed to come through him. Keep the queries separate and secret from each source. I have a hunch the two time lines won’t agree.”

The finger pointing and speculation continue as Falcone and Oxley strive to get to the truth. In the midst of their search, the readers get a look at a fringe group that’s made up of some of Washington’s powerful, wealthy, and influential people who believe their mission is for the greater good of America. It truly is difficult to ascertain who the real enemy is.

Once the real action began in this book, I felt like I was hopping from one place to the next at breakneck speed. It was a good read and gave me a lot to think about as an American and a Washington outsider. If you enjoy a thriller with a hint of romance and an edge of realism, you’ll love this book.

Leigh Neely is a former newspaper and magazine editor. She currently does freelance work, recently had a short story published in the anthology, Murder New York Style: Fresh Slices, and is a contributor to the blog WomenofMystery.net. 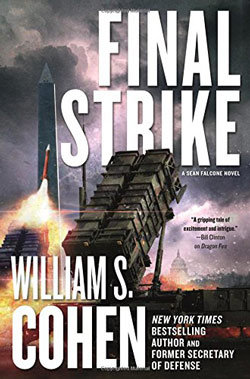 Final Strike by William S. Cohen is the third book in the Sean Falcone series, which dramatizes one of the most terrifying global security nightmares: an asteroid hurtling towards Earth (available February 13, 2018). Sixty million years ago, the K-T Asteroid obliterated the dinosaurs, and now its apocalyptic twin is rocketing toward the US on… 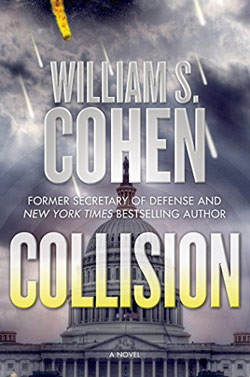 Former Secretary of State William S. Cohen provides a Washington-insider point of view in Collision—the second book in his Sean Falcone political thriller series. In anticipation of the release of Final Strike (available February 13, 2018)—the third book in the Sean Falcone series—get a digital copy of Collision for only $2.99 through February 5th! Sean…