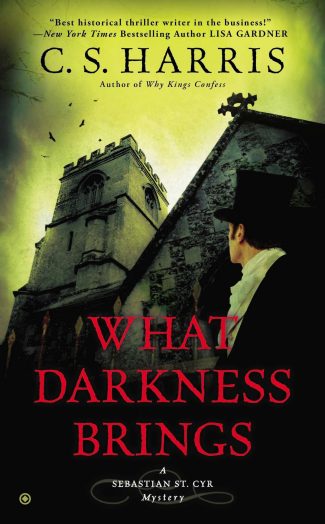 The death of a notorious London diamond merchant draws aristocratic investigator Sebastian St. Cyr and his new wife Hero into a sordid world of greed, desperation, and the occult, when the husband of Sebastian’s former lover Kat Boleyn is accused of the murder.

For the sake of Kat, the woman he once loved and lost, Sebastian plunges into a treacherous circle of intrigue, but he finds his new marriage to Hero tested by the shadows of his first love, especially when he begins to suspect that Kat is keeping secrets of her own. And as matters rise to a crisis, Sebastian must face a bitter truth—that he has been less than open with the fearless woman who is now his wife.

Harris’s detective hero is the son of an aristocrat, but the reader and Sebastian have gradually learned that his origins are not clear-cut. The mystery of his origins; the mystery of what really happened to his mother; and a few side issues related to his father have run throughout the series, sometimes resulting in cliffhanger endings even after the central mystery of a novel has been solved. The mysteries of the main plotlines fall within an overarching, greater mystery: who is Sebastian? And once he knows who he is, what will he do with that knowledge?

However, in this novel I found myself thinking more about Lord Jarvis.  Jarvis serves as Sebastian’s nemesis, and knows more about Sebastian than he will tell. This is always an issue because Jarvis is powerful in the British Regency government, essentially a power behind the throne. Recently, Sebastian married Jarvis’s daughter Hero, adding another level of complication to the political, moral, and interpersonal tensions that drive Sebastian’s investigations.

Jarvis provides both urbane menace and, through his henchmen, straightforward violence to the fast-moving plot. In What Darkness Brings, Jarvis’s influence can be felt everywhere even when he is not actually present, much as his almost-invisible influence is felt in the England of the novels. I realized how much I enjoy the spice of extra danger he provides in each book. It’s even stronger when he is less in evidence!

Jarvis’s immense power did not derive from his kinship with the King, which was distant. It was his peerless blend of stunning intelligence and unswerving dedication to the preservation of the monarchy combined with a cold, unblinking ruthlessness that had made him indispensable first to George III, then to the Prince Regent. For thirty years, Jarvis had maneuvered from the shadows, deftly blunting the inevitable repercussions of a dangerous combination of royal weakness and incompetence complicated by a hereditary tendency toward insanity. If not for Jarvis’s capable stewardship, the English monarchy might well have gone the way of the French, and the Hanovers knew it.

…Jarvis held a scented pomander to his nose, the heels of his dress shoes clicking on the worn paving stones as he strode down the frigid, rush-lit prison corridor. Normally, he ordered prisoners brought to his chambers at the Palace. But under the circumstances, seeing this man in his cell seemed more . . . delectable.

Accused murderer Russell Yates is tied to Sebastian through his former lover, Kat Boleyn, but also has a mysterious past with Jarvis that is more significant than he will at first admit.

[Sebastian] said, “You told me once that Yates has evidence against Jarvis—evidence of something that would ruin him if it became known.”

“It should be in Jarvis’s best interest to see that no harm comes to Yates. If anyone has the power to get the charges against him dropped, it’s Jarvis. So why hasn’t he done it?”

[Kat] drew in a deep, troubled breath, a subtle betrayal that was unusual for her.

“What?” he asked, watching her.

“Jarvis visited Yates in his cell last night. Yates says he came to reassure him that he was in no danger.”

“But you don’t believe him?”

She shook her head, her lips pressed into a tight line as she turned her horse back onto Bishopsgate. “Yates used to think the evidence he has against Jarvis could protect us both. Only, I’m not so sure.”

If you’re already a fan of this series, you won’t be disappointed by the new questions and new revelations that arise in this installment. New readers might want to backtrack a bit first, to enjoy the full impact of the overarching plot elements, but should still be able to make sense of the story even if starting here. In either case, be prepared to turn pages quickly!

Book Review: What the Devil Knows by C. S. Harris

Life is coming up roses for Sebastian St. Cyr, Viscount Devlin… or does that cliché exaggerate? It does ignore his inability to resist stirring up hornets’ nests. Even if he did exhibit restraint, determined gadfly journalist Hero would undoubtedly shove him aside and do the poking herself. Emerging intact from a chaotic past, Sebastian is…

Book Review: Who Speaks for the Damned by C. S. Harris

Who Speaks for the Damned by C. S. Harris is the 15th Sebastian St. Cyr Mystery, where the viscount investigates the mysterious life and death of a nobleman convicted of murder. While London is in the midst of a gala for the Allied Sovereigns’ celebration commemorating the end of the Napoleonic Wars, Sebastian St. Cyr,…