Shane Scully and Sumner Hitchens, homicide detectives and partners in the LAPD, are in fine form in Vigilante, their latest—and last—adventure. I’ve been reading this series since the beginning and, I confess, I read this book with a heavy heart. Stephen J. Cannell was such a talented and prolific writer, even though he was dyslexic. He often finished projects by dictating them to a secretary. However, when you look at the list of TV shows, books, and movies he was involved with, you know it didn’t slow him down.

Vigilante takes on one of my favorite subjects to speak of with disdain—reality shows. I know I’m in the minority, but I just don’t find these shows as entertaining as scripted ones. When the “Vigilante TV” crew shows up at the murder scene of Lolita Mendez, Shane and Hitch know they’re headed for big trouble.

Mendez hated the Los Angeles police. She dedicated her life to broadcasting their mistakes and filing suits against various officers. A hothead and member of one of LA’s most notorious gangs, Mendez was constantly butting heads with Captain Stephanie Madrid, who was in charge of the Advocates section of Internal Affairs.

Nixon Nash, the charismatic star of “Vigilante TV” has risen to prominence by exposing bad cops and poor police work. In every city he’s been to, he’s left the destroyed careers of police officers and detectives in his wake. In addition, Nash has a history with the police in LA.

Now he’s back to exact his vengeance on the LAPD and is trying to pull Scully to the dark side with him, a fascinating development in the storyline.

Like all of Cannell’s books, this one moves quickly and you have to pay attention to keep up. While Shane and Hitch are working to gather clues, they’re being dogged by Nash’s crew and, at times, feel like they being led around by the obnoxious TV host. Scully knows several of the people now working for Nash, including an old girlfriend. Could she be the one to seduce him to Scully’s side? The fire gets hotter when the evidence leads toward Captain Madrid and a possible arrest of one of their own.

“Marcia, please confirm my opinion and tell Detective Scully that it’s not obstructing justice for us to interview a volunteering witness,” Nash said.

“That’s right, because he sought us out,” Marcia explained, still favoring me with her smile. “He’s in the Evergreen gang and hates cops. There’s no way he would ever have talked to you to begin with, so nobody obstructed anything. As a matter of fact, we didn’t obstruct; we instructed him to talk with you.”

“This isn’t going to work like it did in Miami and Atlanta,” I said to Nash. “I don’t intend to stand back while you investigate my homicide behind my back. I’ll file so much paper you’ll think you’re in a ticker tape parade.”

“I assume you paid him for the witness interview?” I replied. Since neither Nix nor Marcia denied it, I knew I had guessed right. “If we ever want to use this wit in court, the defense attorney will challenge his statement, calling it paid-for testimony. That violates the statute on dissuasion of evidence.” I was on pretty thin ice with this argument, and from their expressions I could tell we all knew it.

“If you’re talking about Criminal Statute 136.1, that only deals with dissuasion through intimidation,” Marcia said. “But I’m pretty certain you already know that.”

I’d lost that round. Time to move on.

Shane and Hitch are walking on eggs as they try to avoid creating bad feelings at work, stay out of the radar of the “vigilante” TV host, and bring a murderer to justice.

I felt an underlying sadness the whole time I was reading this book because I know it’s the last one. I’m really going to miss Stephen Cannell—his books, TV shows, and movies.

Leigh Neely is a former newspaper and magazine editor. She currently does freelance work and recently had a short story published in the anthology, Murder New York Style: Fresh Slices. She writes regularly for the blog Women of Mystery. 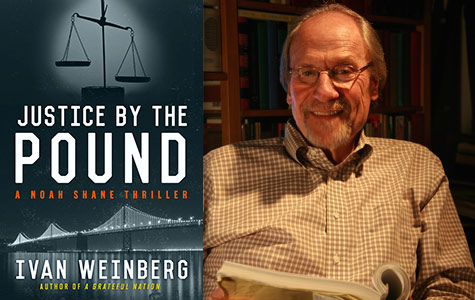 Writing Styles of the Rich and the Famous: How a Famous Friend Helped Me Write My First Novel

Read an exclusive guest post from author Ivan Weinberg, then make sure you're signed in and comment for a chance to win a copy of Justice by the Pound! My only claim to the rich and famous was my closest friend in high school. Steve was always cool. He drove a cool car, had the…