I hadn’t read this series, but I jumped in with book three. Charley Davidson is a pretty young woman who is an investigator. She was trained by her cop father and her cop uncle but works freelance. Oh, and she’s the Grim Reaper.  She helps souls who are stuck on earth cross over, if they want to.

Some help her with her detective work. This is why she was so useful to her relatives on the force—and why she’s such a successful investigator now.  Because, quite frankly, without this help she couldn’t find her ass with both hands.  Charley is very funny, and goofy and tough when she needs to be, but she’s also a hot mess.

Oh, and she hasn’t slept in two, solid weeks.

[He] materialized behind me, his powerful shoulders glistening as steam rose around him, giving the impression he’d just come from hell. He hadn’t, of course. He’d escaped from hell centuries ago and was currently furious with me for binding his incorporeal body to his physical one. But that knowledge did little to lessen the effect.

I squinted to see him more clearly. “What are you doing here?”

He lowered his head, his dark eyes piercing me with an angry glare.

The butthead. It was my bathroom.

His lean body pressed against my backside as he braced the other hand against the wall to my right, completely imprisoning me.

His hard gaze locked on to mine. “Is it impossible because you bound me like a dog to a chain?”

Oh, yeah. He was pissed. “You left me no choice,” I said, my voice quivering, not nearly as conﬁdent as I’d hoped.

The book is mostly light and fluffy, but there’s a darker undertone.  It sort of reminded me of Maryjanice Davidson. The best part is Charley’s voice. She has a unique way of saying things, and her pop culture references are spot on. Here she is, visiting a spirit for some information.

Oh, for the love of Godsmack. I crawled onto my stomach and inched the window open. “Rocket,” I said through the open slit, “you have to let me in.”

“Company? Seriously?” Rocket had died sometime in the fifties. How many people could he know? “There are huge dogs out here, and I have to give you some names.”

He brightened. Like literally. It was weird. He pushed open the window another inch and poked his nose and mouth out. “Names?” he whispered. “Yes, names of people. I need to know if they’ve passed or not.” I could lose him any second. Keeping Rocket’s attention for more than several seconds was similar to winning the lottery, minus the monetary gain.

Her dialogue is natural sounding, a little “Gilmore Girls” quick, but fun.

“They should’ve prepared me better for the likes of you.” His turned away from me. “I have to tell you, now that I can actually see Mr. Wong, he freaks me out even more.”

“And I love knowing that more than you can possibly imagine. It’s too bad you have to go through eternity needing a shave.”

He smiled. “Actually, I don’t. But it is too bad you have to go through life with those chicken drumsticks.” He gestured toward my legs.

I gasped, seriously appalled. “I beg your pardon. These are great legs.” I tried to lift my good one, but doing so hurt the bad one. Maybe it was jealous of the attention its sibling was getting. “These legs are legendary. Just ask the chess team from high school. And what ever you do, do not let the words chess team fool you.”

Charley could be my new best friend.  Funny, tough, supernatural and she’d be awake and available to phone during a bout of insomnia.

Book Review: A Bad Day for Sunshine by Darynda Jones

A Bad Day for Sunshine by Darynda Jones is the first novel in the new snarky, sassy, wickedly fun Sunshine Vicram series, where Sheriff Sunshine Vicram finds her cup o’ joe more than half full when the small village of Del Sol, New Mexico, becomes the center of national attention for a kidnapper on the loose.… 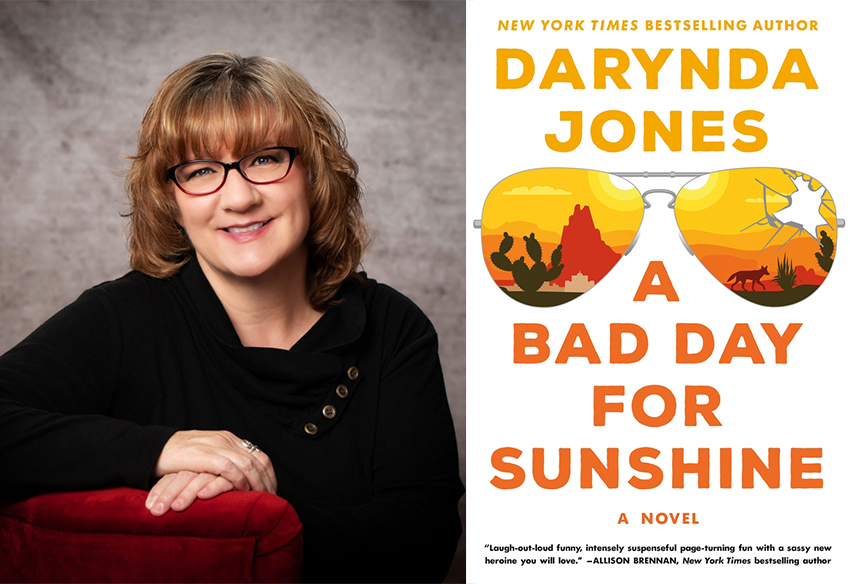 Balancing the demands of law-enforcement with family isn’t always easy, especially if you’re a single parent. Fortunately, as a former detective for Santa Fe PD and now the newly elected sheriff of Del Sol, New Mexico, I can offer a few dos and don’ts—mostly don’ts—to help you harmonize the two loves of your life. My…