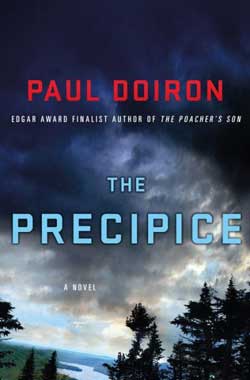 Game Warden Mike Bowditch had intended to have a romantic weekend with long distance girlfriend Stacey Stevens in a cabin along the Kennebec River. But when two young women go missing while hiking the Appalachian Trail and Bowditch is called to help, both he and Stacey are ready for the search.

A city gal myself, I’m generally not a big fan of things green and buggy. So while I was interested in a mystery that brought me a little outside of my comfort zone, I was fairly convinced that Paul Doiron was not going to make me want to take a walk in the park. I was pleasantly surprised, however, with how well I was able to envision Mike Bowditch’s descriptions of all things woodsy. But, these women were last documented at the beginning of a stretch of trail 100 miles long and the search for the two young women becomes more desperate. Even in Bowditch’s descriptions, the Appalachian Trail remains the type of place that someone who grew up in a city might imagine it to be: vast, lonely, and frightening.

Samantha and Missy were wholesome looking young women who had ventured into a place largely empty of human beings: a wilderness where cell phones didn’t work and you could scream all night without being heard. There wasn’t a person involved in the search who didn’t share the same dark fears about what might have happened to them.

I thoroughly enjoyed Mike Bowditch as a narrator and an investigator. Compared to other male investigators in traditional crime fiction I have read, I found him to be intelligent and compassionate with a curiosity that did not lead to an all-consuming fixation with the case. His all-consuming fixation is, of course, with his beautiful, smart, sexy, and sometimes difficult to understand girlfriend, Stacey Stevens. Stacey, a wildlife biologist, is the youngest daughter of Bowditch’s friend and mentor, Charley Stevens. Stacey had been the object of Bowditch’s affections for quite some time before they started dating, and he would very much like them to be closer than they are. His hopes for their rendezvous at the cabin was to bridge whatever gap is there. But Stacey keeps him at arm’s length.

While the mystery of the missing women is the framework of the novel, it is Stacey’s involvement in the investigation and her personal connection to the missing girls which really keeps the novel moving along. She has more insight into what happened to these girls than any of the game wardens or investigators can offer. And while I loved Stacey and the fact that she probably could have solved the whole mystery on her own, I was often perturbed by Bowditch’s repeated inner monologues about his relationship with her.

My first serious girlfriend, Sarah Harris, would have preferred to be awakened, rather than not hear from me. Most women seemed to be that way. But not Stacey. Her frequent silences discouraged me from interrupting them. I wanted to believe that there was no special significance to her decision to not leave a voice-mail message earlier. She knew I would be in touch when I had something to report. It wasn’t a lack of concern on her part.

He is often concerned about whether or not he is treating her the way she wants to be treated, but at the same time he is looking to protect her. I would like to believe that her alliterative name was intentional—indicative of her superhero badass qualities that allowed her to be a pivotal part of the investigation despite not being a game warden or police officer. Stacey had equally as much of a part in finding out what happened to the women—if not more—than Bowditch had. I just would have liked to have seen more of those moments where Stacey used her fearlessness and Bowditch used his Sherlockian need for observation in a team effort.

Alex Calamela is a freelance writer currently living in Staten Island, NY. She can be followed on bookish Instagram and Twitter accounts @alexandrapub.