The Killing Woods by Lucy Christopher is a novel for teens about a high-schooler with a PTSD-suffering father, a veteran accused of killing another teenager who was in the woods to meet her boyfriend for a drugged and drunken night's entertainment (available January 7, 2014).

Ever since her father returned from combat, Emily Shepherd and her mother have struggled with his flashbacks. A roar of thunder can send him back to the battlefield—making anyone in his path an enemy combatant. The stress is almost too much for him and his family. Most days he hides in his bunker, hidden in the Darkwoods, the forest behind their home.

One stormy night, Emily’s father disappears into the woods. When he returns, he carries a dead teenage girl in his arms and has no memory of what happened. Even after her dad is arrested and charged with the murder of Ashlee Parker, Emily doesn’t believe he is guilty. Her father is many things, but a murderer isn’t one of them.

As Emily digs deeper into the truth of that night, she finds herself dealing more and more with Damon Hilary, Ashlee’s boyfriend. And there is far more to Damon and Ashlee’s relationship than first appears. He was in the woods that night. He was drunk and doped up. He doesn’t remember anything clearly. All he knows for sure: he and Ashlee were playing a Game.

The Killing Woods is a quiet exploration of the effect violence has on those who have suffered. Post-Traumatic Stress Disorder plays a significant central role—who suffers it? What circumstances lead to it? What are its consequences? Christopher’s two central characters, Emily and Damon, play out the answers to these questions in the Darkwoods. The answers aren’t always what they expect.

The novel opens with Emily’s father, Jon Shepherd, carrying a girl into the Shepherds’ yard. Shepherd has been out in the woods, alone in his bunker.

It wasn’t a deer Dad was carrying. It was a girl.

Her neck was tilted back, her bare arms glowing in the moonlight. Her clothes were soaking. The garden gate creaked as Dad maneuvered through, struggling. How long had he been carrying her? From where? I moved backward into the kitchen. Dad had done things like this when he’d been a soldier who saved people, maybe he was being a hero again. Then I saw that this girl’s skin was gray. Blue around her lips like smudged lipstick. Her long hair was plastered across her face, dark from the rain. I saw her green short-sleeved shirt and the silver bangle on her arm. I wanted to sweep the wet hair from her face, but my hand was half-raised when I stopped myself I recognized her. I knew this girl.

This girl is Ashlee Parker. Pretty. Popular. Ashlee has been dating school prefect Damon Hilary—upon whom Emily has a small crush. Damon is the last one to see Ashlee alive but there’s one little problem. He can’t remember much of it.

The narration of The Killing Woods alternates between two first person accounts: Emily and Damon. Between the two of them, there are endless miscommunications and misunderstandings which add a certain reality to the situation. After all, how many times in real life are there crossed wires? The bulk of the tension in this particular story comes from these opposing points-of-view. There isn’t a ton of ‘crime-solving’ in the traditional sense. The real story, which is surprisingly quiet considering the violence that surrounds the situation, is told through the alternating, contrasting eyes of Emily and Damon.

Both Emily and Damon have parents who served in the military. Emily’s father came back shattered by what he’d seen and done. Damon’s father never came back. And Damon doesn’t understand how that could possibly be fair. Why should Emily’s dad have come back—only to kill a girl—while Damon’s dad never came back at all? It’s easy for him to be angry with Emily and her family. He’s haunted by violent images.

The puddle explodes as I kick it with the other foot, the water spraying to my thighs and soaking my sneakers.

I’m thinking that Dad’s body must’ve shattered like this, turned into a human firework. Lets and ribs and bits of brain became gunk. His blood sprayed out, melted into desert air. Dad became red mist.

And it should’ve been Jon Shepherd.

Should’ve been anyone but my old man. ‘Cause he never did nothing wrong.

It’s really no wonder Damon throws himself into dangerous midnight games and drugs and Ashlee, who is more mysterious and dangerous than it first appears. He’s trying to escape the harsh realities of his life. Emily Shepherd becomes a seemingly easy target. But as they get to know each other, the situation becomes more complicated. Just when both sides think they have it figured out, they start to change their minds.

Emily wonders if it’s possible her father did kill Ashlee.

And Damon starts to think it wasn’t Jon Shepherd after all. The more he tries to remember the night Ashlee died, the more uncomfortable he becomes. The shadowy memories start to point to another possibility: Damon himself.

Lucy Christopher does a very effective job twisting the two narratives around each other. Emily and Damon are both characters the reader can understand and relate to. Both have been through difficult times in their family lives. Both want to know the truth. And Christopher manages to keep the truth from them…even as they tell the truth to each other. It’s a psychological game that’s very interesting to watch unfold. 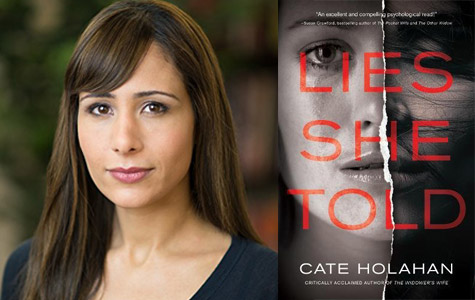 Liar, Liar, Neurons Fire: Lying and the Development of Memory

Read this exclusive guest post about lies and memory formation from author Cate Holahan, then make sure you're signed in and comment below for a chance to win her latest thriller, Lies She Told! My first clear memory is of a lie. Closing my eyes, I see a backyard. Hot and buggy. Ants stumble across…