The Incense Game by Laura Joh Rowland is the 16th book in the Sano Ichiro series. Set in feudal Japan, it follows the career of a samurai who struggles with the conflict between his adherence to the code of Bushido and his personal sense of integrity (available September 18, 2012).

With this series, Laura Joh Rowland has successfully created an original meld of two genres, combining hardboiled mystery with the period piece (it’s okay to be skeptical: I was once, too.) As The Incense Game begins, Sano has risen to one of the most powerful positions in the land, far distant from where he was 14 years ago, when he was merely a minor functionary determined to pursue the truth behind a suspicious ritual suicide no matter what the cost.

Time has done nothing to dull Sano’s keen sense of justice. And while being in a position of power would make life easier for most people, this is not the case for our erstwhile investigator. In the constantly scheming court of the Shogun, political machinations make Sano’s ideals even more dangerous to himself, his family, and even the ruling regime. After an earthquake devastates the capital and its outlying provinces, civil unrest threatens to overthrow the Tokugawa administration. The Shogun refuses to acknowledge the extent of the disaster, leaving Sano to oversee relief and rebuilding efforts. This is all pretty much par for the course for our hero . . . until he stumbles across the strangely well-preserved bodies of three women whom anyone else might have written off as unfortunate casualties of natural disaster.

Sano soon finds himself blackmailed by the powerful landowner father of two of the women to investigate their deaths, at the expense of his work for the Shogun. As he tracks down leads and suspects—two of whom are influential members of government—he traverses the length of Edo, bearing witness to the terrible devastation and aftermath of the earthquake in scenes such as this:

The two-story main gate lay in fragments by the road. Sano’s party trod carefully on shifted, crumbled stone stairs that led to the temple’s main precinct. Inside the precinct, people crowded the space around the temple buildings. Some sheltered under tents; others sat in the falling snow with nothing to protect them except the clothes on their backs. Children snuggled against mothers who held crying infants. The pagoda leaned as if in a fierce wind. Walls had peeled off the abbot’s residence and the novices’ dormitories, exposing empty rooms. Heat waves rose from the crematorium, where the fires that would burn more dead bodies during the night had already been lit. Rhythmic chanting emanated from the main hall, whose massive structure, carved columns and doors, wooden bracketry, and undulating roofs were miraculously intact. Sano and his men entered its cavernous realm of flame-light and shadow. The smoke was so thick that Sano could hardly breathe, the smell of incense overpowering. Kneeling people packed the floor, facing the altar. Their lips moved as they chanted. They were praying to the Buddha to deliver them from evil. Sano hoped the Buddha was listening.

As Sano races to find the killer before the grief-stricken father can make good on his threats, he is ably assisted by his loving family. Unfortunately, Sano’s usually trustworthy aide, Hirata, has become increasingly distracted by his involvement with a mystical secret society that demands more and more of his time. At first, it seems as if his comrades might be able to help, as in this excavation done entirely with superhuman powers:

Groans burst from Tahara and Kitano. Deguchi’s throat jerked. The chasm opened wider, its edges pried apart like lips separated by massive jaws. The house began to rise up from the depths. Splintered beams and boards emerged above ground level, accompanied by the noise of wood scraping against rock. Stunned, Hirata watched the house levitate, its broken plank walls and window frames and torn paper panes coming into view, then its base and stone foundation pillars. It hovered above the chasm like a corpse resurrected.

Kitano and Tahara bellowed. A visible energy wave emanated from Deguchi’s speechless mouth. The men stepped backward. The roofless house wafted through the air toward them and gently landed on the space they’d vacated. Their aura turned off abruptly. The house crumpled into a heap of ruins. The three men bent over, hands on their knees, shaking and gasping.

Unfortunately for our heroes, the secret society has designs of its own, designs that could very well undermine Hirata, Sano, and the government they serve. It isn’t just outside forces at work against Sano and his people, though: the former chamberlain, Yanagisawa, returns in an attempt to wrest power, while the Shogun’s nephew, Ienobu, makes a play for the succession in the wake of the earthquake. Neither courtier has any love for Sano or his family, who must balance politics with a murder investigation that uncovers some truly surprising secrets.

Laura Joh Rowland has written another great installment of the Sano Ichiro series. I was excited to read the fantastic elements, too, and didn’t feel like it took away from the realism of the era at all. Like the hero of any hardboiled mystery worth his salt, Sano takes perhaps more than his fair share of knocks: a hallmark of these novels. Most importantly, the quality of the mystery at the heart of the book is as excellent as usual, and resolved in satisfying fashion. Several plot developments are left open-ended, clearing the way for the next installment, which I’m already looking forward to reading, too. 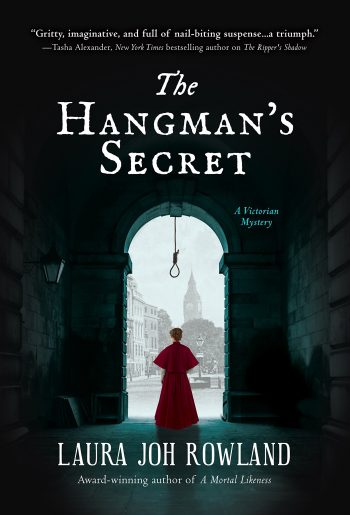 The Hangman’s Secret is the third book in Laura Joh Rowland’s Victorian Mystery series. The Hangman’s Secret is a brutal assault on the senses. Photographer Sarah Bain is no stranger to the London underworld, nor are her associates, Lord Hugh Staunton, and Mick O’Reilly. Sarah works exclusively for powerful newspaper baron Sir Gerald Mariner. She photographs…

Every Wednesday, we here at Criminal Element will put together a list of Staff Picks of the books that published the day before—sharing the ones that we are looking forward to reading the most! This week, we have a new Veronica Speedwell Mystery from Deanna Raybourn and an exciting debut from Jane Harper. See what… The Iris Fan by Laura Joh Rowland is the 18th mystery and finale of this acclaimed series set in feudal Japan, featuring the recently demoted Sano Ichirō whose last case will involve a brutal attack on the shogunate itself  (available December 9, 2014). Japan, 1709. The shogun is old and ailing. Amid the ever-treacherous intrigue… The Shogun's Daughter by Laura Joh Rowland is the seventeenth novel featuring samurai sleuth Sano Ichirō of the court of the shogun in 17th Century Edo (available September 17, 2013). When the daughter of the shogun dies of smallpox, a power struggle erupts among the court, since she did not live to bear him heirs.…