The Heavens Rise by Christopher Rice is a supernatural thriller set in New Orleans about young people whose lives are changed by something coming up from the bayou (available October 15, 2013.)

Christopher Rice’s newest novel, The Heavens Rise, conjures a bizarre tale of mind-altering parasites, murder, and revenge, complied from the journal of missing New Orleans girl Niquette Delongpre, who vanished—along with the rest of her family—one night near Bayou Rabineaux.

Ben, her best friend, and Anthem, her boyfriend, fill in the years between the 2003 disappearances and the present day. Ben’s always had a hunch about who was responsible for Niquette’s disappearance, but kept his suspicions quiet since his suspect, Marshall Ferriot, the last person to see Niquette alive, is comatose in an Atlanta hospital after jumping from the thirty-first floor of the Plimsoll Club.

When animal corpses begin appearing outside Marshall’s room, rumors swirl amongst the nurses that Marshall is behind the ghastly display. After a nurse guts herself with a box cutter, Marshall is removed from the hospital. A P.I. for the bank holding Marshall’s trust believes Marshall’s sister is using the funds for herself, but his investigation leads him to Marshall Ferriot, alive, awake, mobile, and murderous.

Marshall, with a power to control and manipulate animals and humans, crafts an immaculate plot to lure Niquette out of hiding, leaving a trail of blood and body parts in his wake. Determined to punish her for rejecting him, Marshall sets his hooks on Anthem, the only person who could force Niquette to show herself.

The Heavens Rise unfolds in beautiful New Orleans, set by the description of her family’s home, Elysium, and an entry from Niquette’s journal, which turns her family’s paradise into hell with the mundane choice to build a swimming pool.

I loved to swim, but with my mortal fear of snakes, I’d never so much as stuck a toe in the thick finger of black water that snaked through our property like the waterlogged path of some giant jungle serpent. But if I had a cool, perfectly clear pool of pure water… A swimming pool it was. It was a decision that destroyed our lives.

The promise of destruction was just vague enough to engage me. Unfortunately, we don’t get to see much of Nikki aside from sporadic journal entries. I wish she’d been involved a bit more, with a similar frequency with the other narrators. When the plot switches over to the comatose Marshall Ferriot and the weird rumors of him being able to control the animals and nurses with his mind, I was hooked.

I loved Marshall and just how crazy and righteous he believed himself to be. At times he seemed merely curious, trying to learn about the world after eight years of being practically dead. He come across as innocent, until, of course, he starts making people kill themselves in Carrie-like fashion. I felt myself drawn into his madness and his desire to inflict harm, his sociopathic motivation for revenge against a girl who refused to sleep with him.

Nikki Delongpre was staring up into his eyes as he held her to the mud a few feet away from where he stood now. Once hand was around her throat, the other was drawing a paring knife up the length of her torso, slicing the flesh over her breastbone, drawing a red thread past the breasts she had refused to reveal to him. In this vision, Nikki did not scream or cry out or beg for him to stop. Rather, she gazed right into his eyes as a flowing, crimson seam opened in the center of her chest, her stunned, moist-eyed expression radiating a silent, awestruck recognition of his newfound power.

Rice doesn’t just employ supernatural horror; he goes the extra mile with a healthy spattering of gore, changing the tone from frightening to truly disturbing.

Then the horse’s head exploded. The animal’s skull seemed to give way down the center, as if an invisible sledgehammer had struck it in just the right spot. The jawbone slipped free from the collapsing skull in a single piece. After it came the brain matter, a slick, corded tumble the color of mud laced with red wine.

Though I loved being in Marshall’s head, Rice’s use of split narrative lends the novel various perspectives while maintaining enough distance to allow for surprising revelations and plot twists to have their maximum effect. The contrast between Marshall’s rage and Niquette’s caution bring a dimensionality and believability to the story. Rice also employs some fairly detailed foreshadowing and blink-and-you-miss-it hints about the answer to the mystery surrounding Marshall and Niquette.

The only tricky part is paying attention to when the chapters take place, as Rice fluctuates between before and after Nikki’s disappearance and moves around between events and locations. It’s a cleverly crafted tale that kept me engaged and determined to solve the mystery of Niquette’s disappearance and Marshall’s strange powers. If you’re looking for a different sort of horror, I’d consider giving The Heavens Rise a read. 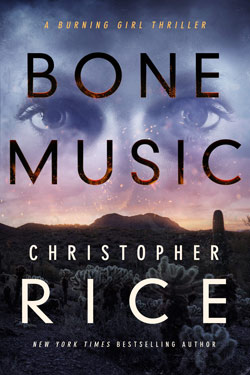 Bone Music by Christopher Rice is the first book in the Burning Girl series, where Charlotte Rowe learns there’s more than one way to stoke the flames of revenge (available March 1, 2018). Christopher Rice may share one of the literary world’s most recognizable and respected surnames thanks to his mother, Anne, but he’s carved…