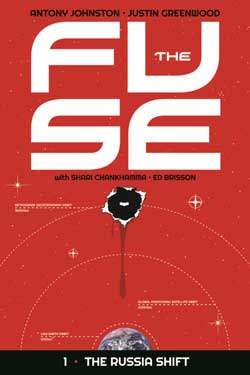 One of my favorite, if definitely niche, entertainment genres is the sci-fi police procedural. I was saddened by the recent cancellation of the TV show Almost Human—featuring a grouchy cop and his quirky android sidekick, for those of you who haven’t had the pleasure—so I'm extra pleased that a book as good as The Fuse has emerged to fill that void for me.

Set on Midway, a city that orbits 22,000 miles above the surface of the Earth, The Fuse Vol I: The Russia Shift follows a veteran cop, Klem Rystovich, and her fresh from planetside partner, Ralph Dietrich, as they investigate the murders of two “cablers.” Midway’s equivalent of the homeless, cablers choose to abandon society and live on the fringes, within the very skeleton of the orbiting city itself. Originally designed solely as a power station known as The Fuse, Midway was built up around the core generator by a group that included Klem’s cabler friend, Pyotr, whom the detectives run into during the course of their investigations:

Dietrich: Will anyone ever tell me what “FGU” means?

Klem: He's fresh. I was gonna string him along a while longer. Go on, tell him.

Pyotr: Thousands of engineers built this place. We all lived up here for six months at a time, doing tours. But only a few hundred of us decided we preferred it up here to down on earth. When the Fuse was finished, everyone else went home. But to us, this was home. We started building. We were the First Guys Up. People like me and Klem built this place. We know every girder, ever rivet, every corridor and exhaust well. Course, most of us didn't figure we'd end up sleeping in them, too.

The murder investigation leads our detectives from the outer fringes of acceptable society to the very heart of Midway politics, where family ties serve only to complicate matters in a city still healing from the wounds of its young history. Confronting a killer puts our detectives in danger, and could have wider, destabilizing implications for the future of Midway itself.

The world building in this book is amazing. I was really impressed with how Antony Johnston and Justin Greenwood use The Fuse as a platform to discuss social issues like homelessness and race relations in a context that is refreshingly global. This is most evident in their choice of main characters: Klem is an older, white, former Russian engineer-turned detective, while Dietrich is a young, black German. Of course, the relationship between the two detectives isn’t all smooth sailing—their initial introduction is awkward, at best, with each partner skeptical of the other’s age and suitability for the job. But their banter is as good as in any terrestrial police procedural, as illustrated here in Dietrich’s first meeting with his lieutenant, Brachyinov:

Dietrich: I am aware of the dangers of projectile weapons in a pressurized environment. I am also aware the Fuse has a serious gun-smuggling problem.

Klem: See, I knew you still did homework.

Dietrich: I am twenty-eight, Sergeant.

Dietrich: I had seventy-five per cent clearance over three years in Munich.

Klem: Now I know you're bullshit. They don't send good police up here.

Of course, any police procedural is only as good as its mystery, and The Russia Shift provides one with genuine surprises. Even so, it’s the relationships and science-fiction that really shine, with Justin Greenwood’s illustrations the perfect accompaniment to Antony Johnston’s words, providing breath-taking space vistas alongside emotive character depictions for a sci-fi police procedural that satisfies on many levels.