Haunted by violence, and as proficient with languages as she is with knives, Vanessa Michael Munroe, chameleon and hunter, has built her life on a reputation for getting things done—dangerous and often not-quite-legal things. On a busy Dallas street, Munroe is kidnapped by an unseen opponent and thrust into an underground world where women and girls are merchandise and a shadowy figure known as The Doll Maker controls her every move. While trusted friends race to unravel where she is and why she was taken, everything pivots on one simple choice: Munroe must use her unique set of skills to deliver a high-profile young woman into the same nightmare that she once endured, or condemn to torture and certain death the one person she loves above all else.

The Doll by Taylor Stevens is third in a series of thrillers featuring private operative Vanessa Michael Munroe. It’s the first time I’ve encountered this series, which began with The Informationist and continued with The Innocent. Munroe, skilled at strategy, tactics, and languages, is a powerful and dangerous figure whose violent aspect is reminiscent of James Bond. It’s interesting to find a female character who is allowed to be a deadly action hero rather than a sidekick or victim, particularly in a story built around sexual trafficking and violence against women.

Strangely for a lead character, Munroe is at first seen only from the outside, from a distance, as she is waylaid and abducted. At first it’s a bit difficult for the new reader to put together all the pieces of who Munroe is and what has happened to her, though continuing readers of the series will enjoy the glimpses of her from new points of view. I enjoyed that Stevens used this opportunity to emphasize how dangerous Munroe is. Though it was useful to me to hear how Munroe is regarded by her friends and colleagues, the villains’ views of her were more potent and interesting, and foreshadowed the conflicts to come.

Bah. Superstitious nonsense. Do not let her hear your language, the source had said, she will use language as a weapon. Keep the area around her free of objects, everything will be used as a weapon. Stay clear of her reach, she doesn’t need a weapon to kill you. Don’t use restraints, she will find a way out of them, and they will only give a false sense of safety. Do not touch her, the source said. Leave her in peace, and treat her respectfully, only then will the violence stay muted. Disrespect these and make no mistake, she will kill you.

The chief villain, The Doll Man, treats women as objects, something clearly communicated through his obsession with his doll collection. But every bit of his creepiness is set against how Munroe reacts to him, and it’s clear that eventually, no matter what, she will bring him down.

Filling the room, floor to ceiling on shelves along each wall, in glass cases, resting on chairs, and standing on credenzas, were porcelain dolls: small and life-size, hand-painted and air-brushed, richly clothed with waxen hair, curled and styled. They stared out at her—more lifeless eyes than she could count—each doll in perfect condition: items a collector had doted on and cared for, with not a speck of dust to tarnish them.

…“Perfection,” he said, his fingers to lace, his voice soft and full of admiration. “They have no flaws, only beauty.” He paused and, still gazing at the dolls, whispered, “Only beauty.” The man turned toward Munroe and his voice returned to room volume. “I have others,” he said, “but these are my treasures. I keep them close, they bring me joy.” He stopped to stroke a porcelain cheek and then with a sigh walked back to the desk and returned to his chair.

… His smile told of power and control in a world where he ruled supreme, a sadistic smile Munroe had seen before, that declared he owned her, and what lay beneath that smile ticked up the tempo of her heartbeat.

Munroe is trapped by The Doll Man at first physically and then by the situation, as she fights to save the lives of people close to her. The villain drags her back down into nightmares she thought she had escaped, and she must fight both him and her own inner darkness.

Movie rights to the first book in the series have been optioned; I hope someday I can see it in a theater!

Victoria Janssen is the author of three novels and numerous short stories.  She also reads a lot.  Follow her on Twitter:  @victoriajanssen or find out more at victoriajanssen.com.

This time last year I reviewed Liars’ Paradox by Taylor Stevens and said, “It’s fun, violent, fast-paced, and original. The comment, “I couldn’t put the book down,” is somewhat trite because everyone says that about a good thriller. Except, I literally could not put the book down until I read every page.” Now, multiply that… 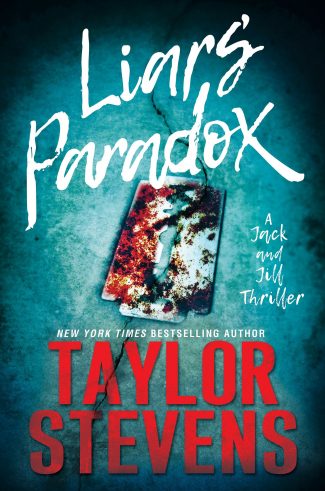 Filled with explosive action, suspense, and powerful human drama, Liars’ Paradox by Taylor Stevens is the first book in the new Jack and Jill Thriller series. Eighteen months ago, Taylor Stevens told me about her new series, and I told her to send me an ARC when it was ready. Her editor sent it to me last…