Stay by Victor Gischler is a thriller about a stay-at-home dad who must juggle his home life with his military past (available June 2, 2015).

Stay by Victor Gischler is the pulse-pounding story of a special operations officer defending his family from a mob conspiracy and a dangerous hit man from his past.

But what sets this book apart from the usual action tale is that the hero, David, is also a stay-at-home dad.

This contrast is what attracted me to the book. Stay delivered on that promise, with domestic scenes of getting kids to school mixed in with a minivan car chase, a tense sequence on a boat in the waters around Manhattan, and a climax at one of New York City’s conference hotels.

The story moved so quickly that I read the book in one sitting, as the bulk of the action takes place in one very long night in Manhattan, with only one small bit of respite as David recovers from his exertions on the boat.

Aside from the action, there are also several effective but quiet scenes of David in his role as the caretaker, such as in this one, when he accompanies his wife to a work party and he’s dismissed as a “house husband”:

He wore an expensive suit and a bright garish tie pulled loose. Gold rings on the fingers of both hands. Manicured nails. A little gray was just creeping into his hundred-dollar haircut. He didn’t have a hard look about him, but he wasn’t in bad shape. Tennis or squash maybe.

When Carter spoke, he gestured with a large tumbler in his left hand, ice clinking and Scotch sloshing over the top. “I wanted you to meet some of the guys from the office. We’re all thinking of heading to O’Malley’s after the—”

He stopped abruptly, blinking at David. “Who’s this?” He looked at Wendy, then at David and back again.

“We’re just talking. He let me use his matches.” Wendy held up the cigarette as proof.

“That’s happening a lot, I hear,” Wendy said, a clumsy attempt at diplomacy. “I mean, in this economy and every thing.” Her desire to be away from the conversation was so palpable, that you could slice it and serve it on toast.

“Yeah, but it doesn’t hurt to marry up, huh, pal?” Carter winked at David. Like they were old friends.

Carter goes on to slap Wendy on the butt and remind her what a good catch he is. Don’t worry. He isn’t let off the hook in the end.

These early scenes of David with his wife and kids, and sorting out how he feels about being a “house husband” were the most emotionally affecting scenes in the book to me. I wanted an emotional payoff near the end that bookended the beginning. And, yes, David triumphs and is more comfortable with his role afterward, but it didn’t pack the emotional punch I expected. In some ways, David is the same person at the end as he is in the beginning. His body count numbers in the double-digits by the end, but it seems to have no effect on him other than “job well done.”

The reader is also left uncertain as to the effect of the acts of violence on his relationship with his wife or even his kids, because I’m not sure an impromptu trip to Disney World to keep them out of the line of fire is enough to make them forget something like this scene:

David smiled at his son and daughter. They were smart kids and would see through a fake smile, which would only make them nervous, the opposite effect he was going for, so he did his best to make it sincere. “We’re going to take a really fast car ride, so don’t be scared, okay. Daddy’s a very good driver.”

“You can drive as fast as you want, Daddy,” Anna said, “because I’ve been on a roller coaster before.”

He thumbed the button to roll down the driver’s side window. David touched the gun in his lap, feeling the cold metal again, mentally orienting himself, reminding himself of the weight and heft, what it would feel like when he squeezed the trigger.

Amy reached for the garage door opener in the cup holder between the seats.

“Don’t,” David said.?Amy jerked her hand back.?David shifted the SUV into gear.?And slammed his foot down on the gas pedal.?Amy screamed.?The Escalade slammed through the garage door, sending pieces flying in every direction. Two men coming up the driveway went bug-eyed for a split second before leaping out of the way. They looked to be cut from the same cloth as the guy David had killed in the kitchen, lethal and experienced thugs, but primitive bruisers, not like the slick professional David had fought in Amy’s office.

They obeyed him instantly, eyes wild and childish, little faces shocked to silence.

David stuck his arm out the window again and emptied the pistol. He didn’t bother to see if he hit anything, tossed the pistol into Amy’s lap. “Reload.”

She fumbled into the duffel for another magazine.

Something unexpected occurred to me after I finished the book: Stay is about 2/3rds of the way to being an effective romantic suspense novel. Perhaps that explains my longing for the emotional punch at the end because, if nothing else, a good romance novel is all about emotion.

There is an effective sequence where David’s wife, Amy, helps to save herself and defeat the villain, but it had to be a shock for her to learn what her husband is capable of. Not that I wished the couple would fight, but it would cause some reevaluation of their relationship as David’s been hiding some of the truth of what he can do.

Still, romance readers who enjoy military romance heroes would likely enjoy Stay and its hero. Action junkies will like the rising action, from the minivan chase to an epic sequence on the rivers around Manhattan where David invades a yacht, is captured, and has to escape before the yacht plows into a barge. It’s easy to confuse the reader during an action sequence in the dark, and Gischler never once loses track of who and what is where.

I wouldn’t be surprised to see Stay at a theater some day, as it seems tailor-made for the big screen. 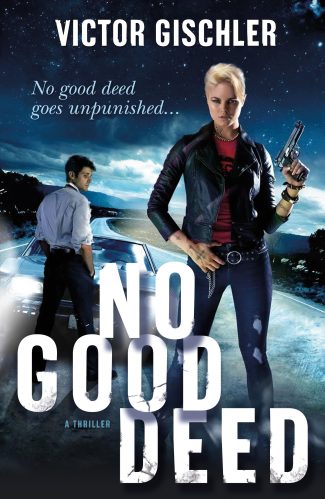 No Good Deed by Victor Gischler is a suspenseful novel about how an ordinary man—trying to do the right thing—finds himself in an extraordinary situation. Francis was running late for work when he found the suitcase and the odd card with an email on it. He knew he shouldn’t bother but he couldn’t resist. Now Francis…