Silken Prey by John Sandford places Lucas Davenport in the midst of a political scandal with deadly consequences (available May 7, 2013).

I have to tell you up front—I love John Sandford. I’ve read everything he’s written and even looked up some of his newspaper stories. He’s a gifted, eloquent writer who grabs me every time with his books.

I’ve had a longtime love for Lucas Davenport. He’s just about the coolest character I know, and I’ve come to know him so well I feel I’d recognize him if I passed him on the street. He’s a dedicated, hard-nosed cop to the core, and he’s like a pit bull that can’t let go of a bone when he gets the bad guy in his sights.

Silken Prey continues the story of Lucas and the wonderful friends and coworkers who make up his world. I’m always thrilled when Lucas and Virgil Flowers, one of his BCA agents featured in another Sandford series, work together, but in this book he also reconnects with Kidd, the famous artist and computer whiz. Then there are the usual suspects—Del, Jenkins, and Shrake who are joined by two female BCA agents we meet for the first time. So many good characters I put off reading the last page because I didn’t want the story to end.

Governor Elmer Henderson knows Lucas Davenport gets the job done. That’s why he personally calls Lucas to handle a delicate political situation. The Minnesota senate race is a heated contest. There’s the incumbent Republican Porter Smalls, a typical conservative politician with great charisma and appeal. He’s generally able to get his constituents to chuckle and put aside his occasional dalliances with women and has been reelected numerous times.

The governor, though a political adversary, is an old friend of Smalls and feels the senator is being framed. That’s why he calls Lucas in to handle a secret investigation that has to be done without any public knowledge, a fact that could be career suicide for Lucas. Still, Lucas always enjoys a good challenge and takes the case.

Naturally Lucas’s exploration opens up the proverbial can of worms, and when the worms start wriggling, there’s murder, political intrigue, and a whole host of secrets and lies.

Sandford is one of the few writers that can take you step by step through police procedures in an interesting and humorous way that makes you want to keep reading. In my opinion, that’s a gift. I read mystery and suspense novels all the time. Not all police procedurals are the same, let me tell you.

Here’s a little taste of Lucas’s trademark humor, which is given in brief snippets along the edges of big scenes.

Taking Flowers along for an interview:

Carver nodded at Flowers and asked, “Why’s there a cowboy with you?”

“Lucas might’ve wanted you hog-tied,” Flowers said. “He thought I’d be the guy to do it.”

After an interview with a suspect:

“He’s pretty obviously a miserable dirtbag liar and a piece of low-life scum, but, he had a lot of detail,” Lucas said.

About Lucas and his penchant for dressing well:

“You look like a bug. You fall down out there?”

“About four times. We weren’t running so much as staggering around. Potholes full of water…I see you kept your French shoes nice and dry.”

But along with the humor and the obvious friendships of these agents, there’s the trail to the murderer and moves that could possibly put them all in harm’s way. Lucas and his men know these things only too well, but they never back down from taking the bad guy, which makes these books riveting.

Even though he’s up to his ears in politicos who work diligently to keep everything under wraps, Lucas finds a way to ferret out the truth when he needs it. And Kidd is just one of his excellent resources.

Lucas dug Kidd’s phone number out of his desk and called him. Kidd picked up: “Hey, Davenport, he said. “Wasn’t there, didn’t do it.”

“Just making small talk,” Lucas said. “I need to talk to you…about computers. A friend told me that you understand databases.”

“Ingrid Caroline Eccols.” There followed a silence so long that Lucas finally asked, “You still there?”

“Thinking about ICE,” Kidd said. “So, what’s the situation?”

“I’d rather explain it in person,” Lucas said. “But time is short. Would you be around tomorrow, early afternoon?”

“I couldn’t even begin to explain the many ways in which she could be a problem,” Kidd said.

“Can Lauren sit in?”

“She’s a very confidential woman,” Kidd said. “And if it’s that confidential, I’d rather she hear about it. You know, in case I need a witness at some later date.”

“Then fine, she’s invited, if she wants to be there.”

As always, Sandford has written a book filled with political corruption, deceit at every level, and, of course, murder that is an interesting and satisfying read. His incredible dialogue, attention to detail, and unequaled story telling make this another winner for the mystery master.

Leigh Neely is a former newspaper and magazine editor. She currently does freelance work, writes for the blog WomenofMystery.net, and has a short story in the anthology, Murder New York Style: Fresh Slices. She and her collaborator, Jan Powell, have a book, Second Nature by Neely Powell, coming out soon. See updates at their website, www.neelypowell.com or www.neelypowell.wordpress.com, their blog. 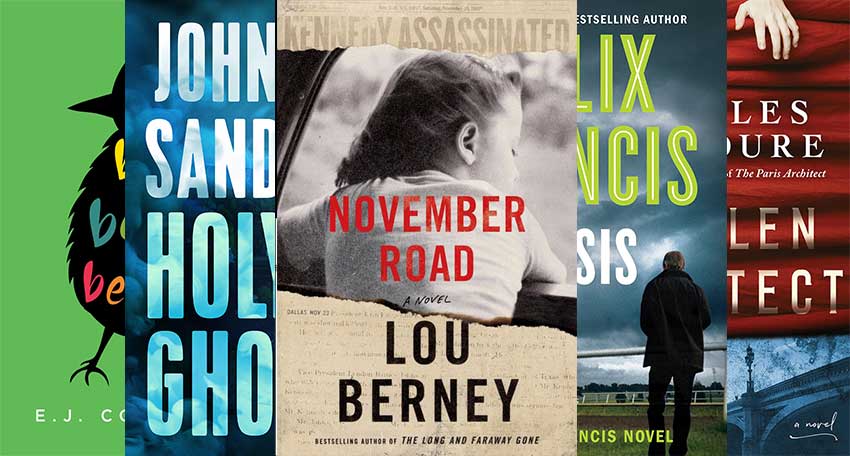 Every Wednesday, we here at Criminal Element will put together a list of Staff Picks of the books that published the day before—sharing the ones that we are looking forward to reading the most! This week, Lou Berney’s highly anticipated November Road combines with John Sandford’s newest Virgil Flowers mystery to make for a killer week of…