Rest for the Wicked by Ellen Hart is the twentieth Jane Lawless, restaurateur and Private Eye traditional mystery (available October 2, 2012).

I have been reading books written by Ellen Hart for—can it be?—twenty years. I started off in the early nineties when I came across a copy of Hallowed Murder on a library shelf. Written in classic fair-play murder mystery style, the novel introduced Minneapolis restaurateur Jane Lawless and her irrepressible sidekick Cordelia Thorn. I so enjoyed their company that each year I mark my calendar, waiting for their next adventure. Along the way, Ms. Hart introduced us to another series filled with bright and energetic Minnesota residents beginning in 1994 with her first Sophie Greenway novel, This Little Piggy Went to Murder.

Apparently the years have flown and here in my hand is the twentieth Jane Lawless mystery, Rest for the Wicked. Although she still owns two restaurants, Jane has entered into a formal business partnership with Private Detective Alf Nolan and has a brand new Private Investigator’s license all her own. She’s feeling decidedly edgy and thinks the professional change will help her refocus.

Often the Jane Lawless books give the reader a few pages to settle in comfortably before disaster strikes. Not so this time. Before the end of the second page we watch a tragedy unfold that is going to bring Jane full speed into a tangled web of deception and secrets.

And now he was here, standing at the edge of a dark alley, unsure what to do. Removing his cell from his jacket, he fished inside his shirt pocket for the business card his uncle had given him. He held it up, tipped it this way and that until he could read the number at the bottom. Punching it in, he waited, hoping the call would be answered by a real live human. Instead, he was put through to voice mail.

Fixing his eyes on the driving snow, he said, “This message is for Jane Lawless. You don’t know me. My name is DeAndre Moore. I need to talk to you. I can meet you anywhere you want, just name it. So you know, my uncle is Alf Nolan, your partner. He told me that if I ever needed any help and he wasn’t around, that I should call you. Since this is a…a private matter, and he’s family, I need you to keep this quiet.” Here, he paused. “I’m desperate, Ms. Lawless. There’s someone I know…someone I love… who’s in bad trouble. I’m trusting you, okay? I need you to help me figure out what’s going on before someone else gets killed. Anyway, that’s enough over the phone. Hey… what—”

DeAndre felt a sudden fierce sting in his shoulder.

As is always true in the Jane Lawless series, life moves forward even when there is a murder to resolve. Her PI business partner Alf Nolan winds up in the hospital due to a fall on an icy patch of snow. One of her restaurants is not being managed as well as Jane would like. Oh and how could I forget the boisterous dustup between Cordelia and her romantic partner Melanie which flares up early in chapter 2? This book opens busy and stays busy right until the final scene. You will love every minute.

Ellen Hart is a multiple winner of the Lambda Literary Award, the Minnesota Book Award, and the Golden Crown Literary Award. I suspect there will be more awards ahead.

Terrie Farley Moran’s recent collection of short stories, THE AWARENESS and other deadly tales, is currently available in e-format for the Nook and the Kindle. Terrie blogs at Women of Mystery and you can look forward to her short story “Jake Says Hello” in the December 2012 issue of Alfred Hitchcock Mystery Magazine.

Every Wednesday, we here at Criminal Element will put together a list of Staff Picks of the books that published the day before—sharing the ones that we are looking forward to reading the most! This week, the highly anticipated new novel from John Hart highlights an incredible week of books! See what else we're reading: 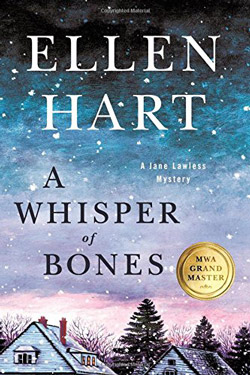 Review: A Whisper of Bones by Ellen Hart

A Whisper of Bones by Ellen Hart: A Visual Guide

GIFnotes: Giving you the basic plot summary of an upcoming book with the help of the Graphics Interchange Format. A Whisper of Bones by Ellen Hart is the 25th book in the Jane Lawless mystery series—take a visual tour!