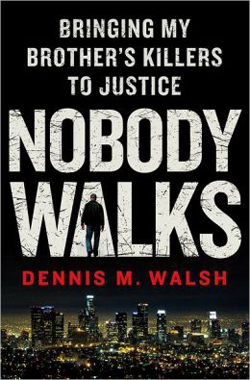 Nobody Walks by Dennis M. Walsh is the true story of a man who set out to find his brother’s killer (available February 12, 2013).

In the summer of 2003, a meth-addicted criminal named Christopher Walsh went missing. More than a week later, his body was discovered in a storage locker in Van Nuys, California. Walsh had been shot five times in the head and neck and then stuffed head-first into a trash can before being put in the storage locker. It was the kind of crime that happens every day in the seedier parts of Southern California and like most crimes of its nature, it originally went unsolved. It wasn’t that the detectives investigating the murder were uncaring or incompetent, but murder in the Southland is a rising tide as implacable and unstoppable as the ocean rising over the New Orleans levees in the wake of Hurricane Katrina.

No one might ever have known who killed Christopher Walsh if it weren’t for his brother Dennis, the only male in his family who didn’t follow in the footsteps of their criminal father. As an attorney, not as a vigilante, Dennis M. Walsh turned his skills and education toward the cause of finding justice for his baby brother and this book chronicles the story every step of the way.

This is a gut-wrenching tale and one of the most potent moments occurs when Dennis is waiting to be let into the storage unit to identify his little brother’s body. He is blindsided by memories, from the day their mother brought him home from the hospital to the way Christopher always carried around a stuffed animal he called “Lambie Pie.” In that moment, before Dennis confirms his death, Christopher Walsh comes alive for the reader and when we discover, without any doubt, that it is his decomposing body sealed into the trash barrel and emitting a foul odor, we feel it like a punch in the gut.

We’re standing right next to Dennis as he responds to the condolences of the storage unit’s owner with a vow that will become his mantra for the next years of his life:

“There are four brothers left, and we’re coming,” I said. “Anybody who had anything to do with the planning, the murder, moving the body, or the cover-up is going to answer for it. Make no mistake about it—and you can tell each and every one of those assholes out there—nobody walks on this case. Nobody!”

There have been a lot of true crime books written by family members who have spent years hoping for some sort of closure only to be frustrated again and again. (YA novelist Lois Duncan’s Who Killed My Daughter? offers the results of her investigation into the death of her daughter Kait and names the person she believes responsible, but the case remains open.) These books rarely end well, and often the story behind the story they tell is of an author whose life is wrecked beyond salvage. Nobody Walks breaks that mold.

Walsh’s prose isn't particularly graceful but he is a storyteller and the story he’s telling is as compelling as any police procedural with its unraveling of family secrets and lies. For years, the Walsh family mantra had been “Don’t tell Dennis,” and after Christopher’s death he starts hearing stories from his brother Dan that alarm him. Many of those stories mention the name David Steinberg, a high school friend of Christopher’s recently involved in a shootout with an off-duty sheriff and who had once boasted to a confidential informant: “I jack people.”

Theoretically, Walsh isn’t in the investigation alone. But as his other brothers lose themselves in increasingly bloodthirsty fantasies of how they’re going to punish the killer or killers when they’re caught, he’s once again the outsider in the family as he insists they work within the system to do what needs to be done.

The cops don’t want Walsh’s help either, and as months, then years go by, it gets lonely for the author. Walsh is candid about the quality of that loneliness and writes about the companionship of his wolfdog Johnny Rio and Frank the cat, who are often the only living creatures he sees outside his law practice. Life goes on and death waits for no one. (One of the funniest moments in the book—albeit a blackly comic moment—occurs when he is scattering his mother’s ashes.) And through it all, Walsh continues to ask questions and pursue answers.

Where those questions take him and what those answers hold introduce us to a cast of characters with names out of a Damon Runyon story and lives out of an Irish tragedy. And we’re with Walsh all the way, not just on the same page, but there. This is a visceral, intense read. This is a story of justice delayed but not denied; a story of a brother’s love and a family’s sorrow. Poor Christopher.