Fledgling PI Paige Holden and Assistant State’s Attorney Grayson Smith start on opposite sides before becoming a formidable team delving into the deadly secrets behind a murder conviction. Holden hears the last words of a dying Elena Muñoz, who says cops were chasing her as she presses a flash drive into Holden’s hands. Elena’s husband, Ramon, a gardener, was framed for the murder of Crystal Jones during a party given by Rex McCloud at the estate of his grandfather, retired state senator James McCloud. Elena’s evidence and an attempt on Holden’s life prevented by Smith launch the pair on a mission for justice. Both Holden and Smith have carefully guarded secrets that keep their passions smoldering before bursting into flames.

Back when I was in grad school studying Victorian literature, we had a saying: There’s no mother like a dead mother. For the Victorians, at least, the dear departed mother was someone to be venerated, like a saintly martyr. But in Karen Rose’s latest romantic suspense offering, No One Left to Tell, we see a whole different sort of absent mother. The kind who, unlike Oliver Twist’s saintly mum, leaves nothing but angst in her wake.

Rose’s heroine, rookie private investigator Paige Holden, has come to Baltimore to escape the bad memories of her own shooting the previous year in her former hometown of Minneapolis. Her grandparents, who raised her, are long gone, and her own mother, who had been an addict, is out of the picture. And when she had been in the picture she was hardly the sort of mother our Victorian predecessors would adore. Seeing how the wealthy socialites they’re investigating for murder waste their privilege sets something off in Paige. She tells Grayson Smith, our hero:

“I had a mother who would rather shoot herself up than feed me.” She told herself to shut up, but the words kept coming. “By the time I was [six] I was running cons, the cute kid they’d send in first to cry for my mommy. I’d distract the mark while my mother and her bed buddy du jour would steal them blind. If I’d had one millionth of what those assholes shoved up their rich noses, I wouldn’t have gone to bed hungry every night.” She drew a breath and let it out. “I’m sorry. That was total TMI.”

“I figured as much,” he said evenly. “Not the con part, although I’ve heard it before. So what happened?”

He met her eyes for a moment. “How did you become wonderful?”

His question slapped her hard and her eyes filled, humiliating her. She turned to the window, focusing on the pretty trees lining the streets. “My grandfather.”

But the absent mother isn’t the only sort who appears in No One Left to Tell. For the most part, the mothers who are present are good. From Maria Muñoz, who has hired Paige to prove her son Ramon’s innocence, to Grayson Smith’s mother Judy, there are many examples of good mothers to contrast with the bad.

To save them from a life on the streets, Grayson’s mother served as nanny to a wealthy family, and as a result, he and his mom were embraced by that family to such a degree that he considers the Carters his family—even referring to their children as his brothers and sisters. But Grayson has a secret. A secret both he and his mother have kept for upwards of twenty years. When Paige accidentally finds an old photo, she stumbles upon a clue to his past.

This was his mother, then, who clearly loved him. Paige didn’t have to wonder if Grayson knew how lucky he was. She’d heard the gratitude and respect in his voice when he’d spoken of her. And the regret in his voice when he’d been talking to her the night before, during the cell phone conversation Paige never should have heard.

She reached for the last of Grayson’s photos and her hand stilled. There was a picture that hadn’t fallen but had been wedged into the back corner of the shelf, behind all the others. It was small, about the size of her palm, in a cheap silver frame that was tarnished around the edges….

His mother knelt beside him, her plain gray skirt draped modestly over knees. She wore the same navy blazer, which had stitching on the breast pocket, an insignia of some kind. Her arm was around him and she smiled.

Differently, she thought. His mother smiled differently than in the later picture. She was happier here. Grayson had said his father left them and Paige wondered if the abandonment had happened yet. She didn’t think so. His mother looked too happy….

He’d said they’d been homeless, that his mother had gotten a job as a nanny. But her blazer matched his, down to the stitching on the pocket. She worked at the school. Had his mother been a secretary? A teacher? Why had his father abandoned them?

Promise me you won’t tell her. Whatever had happened, it had been bad.

In No One Left to Tell, what begins as a mother’s attempt to clear her son’s name escalates into a full-scale battle between those who would keep their secrets hidden and those who would bring those secrets into the light. And at every turn, there are mothers who will protect their children at any cost, and mothers who betray their children at the drop of a hat. The portrait Rose paints of the mother and child relationship is a complex, and at times chilling one, but as with all of her novels, the result is a compelling and ultimately uplifting read. And unlike the novels the Victorians loved, there isn’t a saintly portrait of a dead mother in sight.

Manda Collins has been reading mysteries since her first Nancy Drew at the age of six. An academic librarian by day, by night she writes historical romance blended with mystery for St. Martin’s Press. Her first book, How to Dance with a Duke, was released in February 2012. To learn more, check out her webpage or follow her on Twitter @MandaCollins. 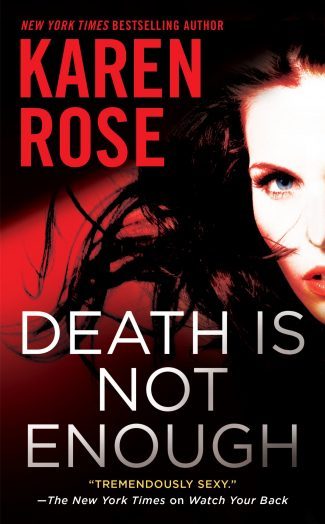 Death Is Not Enough by New York Times-bestselling author Karen Rose is the sixth book in the Baltimore series, where the past comes back to haunt a high-profile defense attorney. Karen Rose’s latest book begs the question: What is the special sauce that keeps her readers coming back? When I reviewed Monster in the Closet… 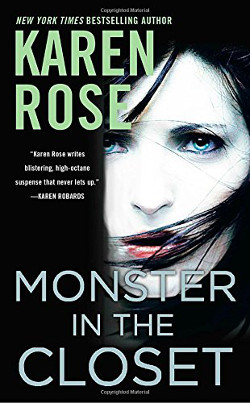 Review: Monster in the Closet by Karen Rose

Monster in the Closet by Karen Rose is the fifth book in the Baltimore series, where a father-daughter reunion puts innocent victims in the sights of a stone-cold killer. Monster in the Closet is not for the faint of heart. It embraces the deep psychological wounds of three brave females—two young sisters and an equine therapist-in-training—and…