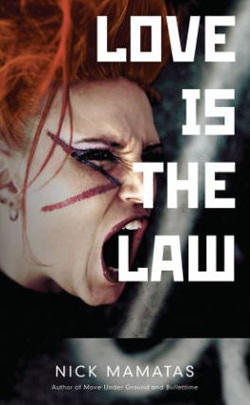 Love is the Law by Nick Mamatas is a punk noir mystery featuring 18-year-old “Golden” Dawn, who is out for revenge (available October 8, 2013).

Remember punk rock in the 1970s and 1980s? With strident vocals, driving drumbeats, and guitar work like buzzsaws, punk rock—and the lifestyle that sprang up around it—was all about denying the establishment and saying what the mainstream didn’t want to hear, exemplified by loud songs that resonated with disaffected youth around the world. Punk rock and its most visible adherents deliberately shocked the bourgeoisie by refusing to play along with the zero-sum game of life they were convinced they’d been set up by society to lose.

Love is The Law by Nick Mamatas is a book very much steeped in these traditions, focusing on a turbulent time in the life of 18 year-old Dawn Seliger. With a senile grandmother, a dead mother, and a crack addict father, Dawn finds solace in only three things: punk rock, Trotskyism, and the occult arts taught to her by her only friend, the much older Bernstein. When she finds him dead in his living room, an apparent suicide despite the fact that the gun is in the wrong hand, she sets off on a mission to bring his killer… well, not to justice. Dawn has issues with that word.

There’s a ritual I know—Liber III vel Jugorum. It’s freedom through bondage. Set a rule: don’t use a word like “the,” or “but.” Or don’t use the letter “m.” And when you do, take a razor to your flesh. Soon enough you’ll stop doing what you’ve decided not to do. So what I barred myself from even thinking was the word, the concept of justice. Nothing’s fair. Nobody is owed jack shit. Every dumb failure, from premenstrual cramps to hearing only the outro of that one song on WLIR that I so wanted to tape, is exactly what I had coming. And the same with television. Hurricane Hugo tore through North Carolina and every weepy redneck hick appealed to God, and it was hilarious. I did slip up a few times. Every chubby girl on Long Island cuts herself when she’s feeling angsty—vomiting is for mere cheerleaders—but I worked with a deeper purpose, running a razor across my stomach, playing with fingertips full of blood. It hurt all the time, but that’s the point. After a week, I was free of notions of bourgeois j______.

Instead, she’s out for revenge. As she searches Long Island for the killer, she finds herself relying on the Crowleyan magic Bernstein was teaching her to track down not only a ruthless enemy, but to escape a snare that has been set to claim her as its victim. Dawn is a smart girl, prone to ruminating on the political ideologies of the underbellies she trawls in her search, and teasing out the connections between them.

Capitalism is an occult formation. Look at the back of a dollar bill, and it’s all there. That’s what makes the exoteric esoteric; put that shit right on display and that’s how a symbol gains power. The Federal Reserve makes money out of nothing but Will every day—it’s a friggin’ wizards’ guild. Where the pyramid meets the eye is where Bernstein was in life, and where I was now that he was dead. I’d be next with a bullet in the brain, with a gun placed in the wrong hand as a knowing joke.

Her bravado fuels this brutal, unsentimental look at the life of an intelligent teenage outcast in 1989 Long Island. It’s as tough and unforgiving as a punk rock song, and demands that the reader be at least as open to ideas, or at least as familiar with the occult and with politics, as our heroine Dawn. Nick Mamatas also uses the novel to cast slyly funny aspersions at the current state of the world through the lens of rebellious youth in the 1980s. It’s not a book that will appeal to everyone, and has no ambitions towards that effect. Instead, it perfectly channels the zeitgeist it studies, and is an exhilarating read for people who miss the raw energy of punk rock at its peak, as well as for any students of the political turbulence of the era.