Josie Prescott has come a long way since she was forced out of a prestigious job in New York City after revealing a price-fixing scheme. She settled herself in Rocky Point, New Hampshire, where her antiques business is thriving, and she’s receiving the recognition she deserves in those circles.

After a relatively calm auction for abandoned storage units, Josie and her friend Henri Dubois discover they’ve fared well with the day’s bidding. Henry finds beautiful silent movie posters that he immediately turns over to Josie for authentication and appraisal. Thrilled for the opportunity to explore such rare materials, Josie and her crew begin work immediately. Though she has tentative good news for Henri, Josie is surprised to learn he didn’t come home last night and is still missing. When his body is found in the unit he bought, Josie wonders if the rare posters were worth enough money to be a motive for murder.

I’ve seen promos of the show Storage Wars, but hadn’t really considered what’s involved in this kind of business. However, I was surprised to find the process of bidding for a room of unknown items and cataloging them afterwards to be compelling reading. Vintage original movie posters and handmade jewelry figure prominently in this story, and reading about Josie’s search for each item’s history was educational and entertaining.

Josie is a delightful character, and I love the way she relates to the other characters in the series, especially Hank, the cat who lives in her warehouse. He’s her sounding board and provides the perfect responses to her thoughts and speculations. As a cat lover, I always enjoy seeing these delightful creatures coloring the periphery of stories.

I’m amazed at how economical Jane is with words, yet she conveys exactly what’s needed for a scene to the reader involved. The description of this character set the stage perfectly for the conversation Josie had with her:

I’d assumed that Mrs. Greeley would look her age. I’d expected that her face would be lined with wrinkles and dotted with dark sunspots, that her hair would be white and crimped in an old-lady style, and that she’d wear warm, but shapeless, clothing. Instead Trina looked about seventy. Her creamy white skin was smooth, with only a few crinkly lines near her needle-sharp eyes and full lips. Her gray hair hung to her waist in a loose braid. She wore a stylish, belted, hip-length burnt orange sweater over a to-the-ankle India-print paisley skirt and henna Birkenstock shoes. Bead-and-feather earrings dangled from her ears.

Though Mrs. Greeley was minor character, she left a lasting impression because the author did such a good job of bringing her to life.

Of course we know everything we own has a history, especially if it has gone through several generations of family. Taking the time to research that history when it’s not connected to you or your family, though, creates a gripping mystery that would be sufficient for its own book. Having that kind of curiosity and determination makes Josie a perfect mystery heroine.

It’s obvious when you’re reading this series that Jane Cleland, like Josie, knows her stuff when it comes to antiques. She’s done extensive research and that’s reflected in how well the books are written. This scene below is the first time Josie and her crew see the movie posters. My guess is your interest will be piqued, and you’ll want to read the entire book:

He opened a triangular post office poster mailer he’d leaned against a wall, and turned it upside down. A round poster tube fell out. He thumbed off the plastic lid and shook out a cylinder covered in brown wrapping paper, secured in three places with small bits of masking tape. The ends of all three sections of tape had been folded over, leaving nonsticky handles about an inch long, an easy way of ensuring you could remove the tape gently. Someone had packed whatever was about to be revealed with care. Henri peeled the tape back, then unfurled a thin stack of colorful posters. He moved the album to a chair so he could stretch the posters out across the guest table. Placing the triangular poster pack across the top and two Minnie Mouse paperweights I commandeered from Gretchen’s desk on the bottom made the posters lie flat.

“Would you look at that,” I said. Greta Garbo gazed at me from under blue-tinted lids, meeting my eyes and holding them. Her expression was knowing and brazen and dangerous. I glanced at Sasha and Fred, both staring at their computer monitors. “Fred? Sasha? Come here a sec and take a look at this. It’s a poster for the movie The Mysterious Lady. What do you think?”

“I think it’s no wonder she was the biggest star of her day,” Fred said as he approached.

“It’s in wonderful condition,” Sasha added. “So good, it makes me wonder if it might be a repro.”

“There’s more.” Henri deftly moved the Garbo poster to the back of the stack, revealing Lillian Gish dressed in bridal white in Way Down East. From the pout of her ruby lips to the sensual gaze of her limpid brown eyes, her expression defined ingenuous.

“She’s dressed like a bride,” Sasha said. “I think she looks virginal, not hot.”

“Oh,” she said, casting him a sideways glance.

I was always amazed how well Sasha and Fred got along, when on the face of it, they had so little in common. Sasha was a small-town girl, local to Rocky Point. She didn’t like cities and didn’t really understand how anyone could. Fred liked Rocky Point just fine but spent many of his days off  in New York or Boston. Sasha was reserved. Fred was gregarious. Sasha dressed for comfort. Fred dressed for style. While they  were as dissimilar in demeanor as any two people could be, the qualities they shared transcended their differences. They treasured the artifacts we appraised not only for their beauty but for their history, and they were both analytical truth seekers. Their disagreements, which to the uninitiated might smack of bickering,  were never personal.

The third poster featured a Ku Klux Klansman riding a rearing horse, both horse and man clad in white, including head coverings. The man held a burning cross high above his head. The background swirled in fiery yellow-green. Oblongs of red- flecked gold dappled the man’s thigh and arm and head. Evidently, the fire, though out of the frame, had just been ignited. The image was bone-chillingly fearsome, more so for what couldn’t be seen. The text read “D.W. Griffith’s The Clansman.”

“That’s terrifying,” Sasha said, twirling a strand of hair, a sign of anxiety.

“Completely,” I agreed. “The coloration is incredible, though. That green makes no sense, but it works. And that coppery gold from the flames . . . it’s spectacular.”

“The posters aren’t all drawn by the same hand,” I noted. “This style is much more dramatic than the others. The one with Lillian Gish is down-right delicate.

The world of collectibles and antiques is interesting, but adding a murder mystery to the mix makes for great reading. I predict this series of books will be among your favorite things when someone goes through your belongings mnay years from now!

Leigh Neely is a former journalist and editor who now writes fiction fulltime. She and her writing partner, Jan Powell, are working away on a new, co-written Neely Powell series for Harlequin. She also writes for the popular blogs womenofmystery.net and for neelypowell.wordpress.com. Her short story, “A Vampire in Brooklyn” is in the anthology Murder New York Style: Fresh Slices. 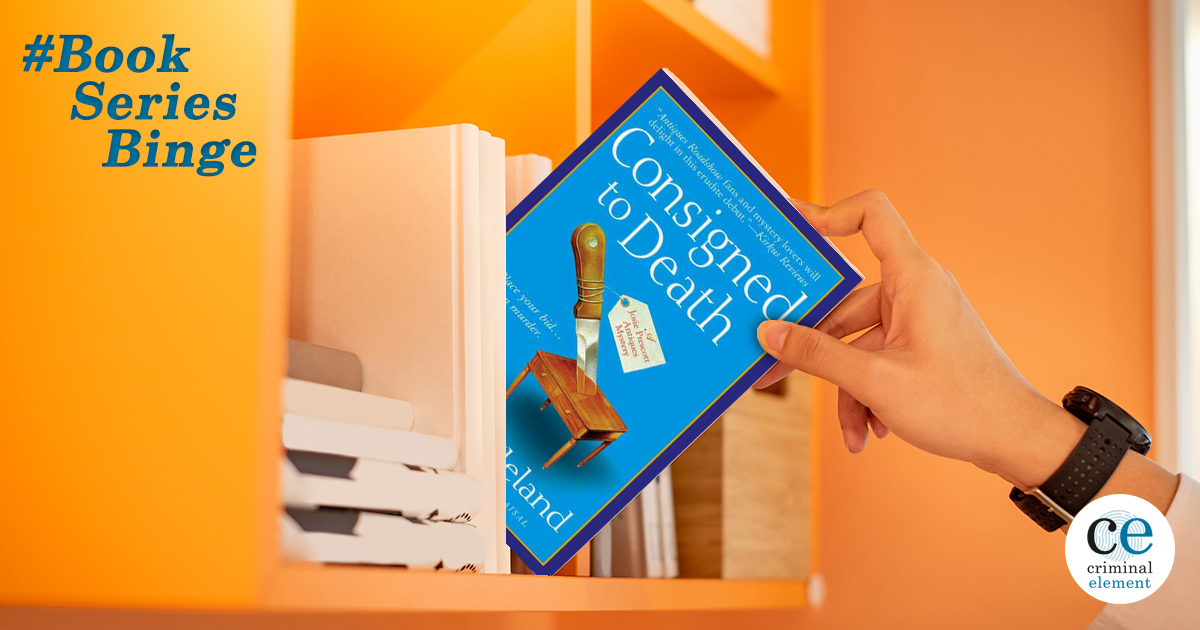 Would you like to live in the setting you created for the Josie Prescott Antiques Mystery series?  Oh, yes. Rocky Point is a special place, a quaint town on the rugged coast of New Hampshire. It’s a sweet and decent community, the kind of place where local bands play familiar tunes on warm summer nights.…