Justice for Sara by Erica Spindler is a romantic thriller about a young woman who returns, after a decade of hiding, to her hometown to solve her sister's murder. (available August 6, 2013).

She's the queen of the romantic thriller, with a raft of awards to her name, so a new Erica Spindler novel is always something to look forward to.

Her books are not for fans of hard-boiled, noir or heavyweight crime novels, but if you like your murder mystery with a frisson of romance, then Spindler is definitely your girl.

Justice For Sara is the story of Katherine (Kat) McCall. Orphaned as a teenager, Kat lives with her older sister, Sara, in Liberty, Louisiana. The girls are heiresses to a huge fortune, although 17-year-old Kat won't receive her inheritance until she reaches her 18th birthday—a fact which is causing loud and long arguments between herself and Sara, who worries that her little sister is running with the wrong crowd and dabbling in drugs and underage sex.

So when Sara is found, bludgeoned to death with Kat's baseball bat, the local police are convinced she is the culprit.

Luckily, a jury thought differently, and now, 10 years later, an innocent Kat is back in Liberty—and bent on discovering the truth.

The townsfolk don't exactly welcome her with open arms, but luckily the hunky local police Sergeant Luke Tanner is willing to help in her search for justice —thus adding the love interest that make Erica Spindler's books such a hit with female readers.

She certainly has a light touch with dialogue, and can convey a great deal from just a smattering of words. Kat and Luke's first meeting is inauspicious, but already we can read between the lines.

She surprised herself and smiled. “How can I help you, Sergeant Tanner?”

He motioned to the graffiti across the front of the house. “I heard from Mrs. Bell across the street that you’d had a little trouble already, thought I’d stop by and check it out.”

“Iris Bell’s still alive? I thought she was a hundred ten years ago.”

Kat could see he wanted to smile but thought better of it. His brown eyes crinkled at the corners. He cleared his throat. “Probably just kids, but we’ll be keeping a close eye on the house, stepping up drive-bys and the like.”

“I appreciate that, Sergeant Tanner. And I’m sure Iris Bell will be stepping up her surveillance as well.”

Again, he struggled not to smile. “This is a small town, Ms. McCall, everybody knows everybody and their everything. To that end, you might as well call me Luke.”

“I remember you now. Local football hero. You were off to college before I got to Tammany West High.” She cocked her head. “You were a bit of a hell-raiser, am I right?”

He laughed. “So now you understand my comment about bad history with my dad. We all carry our pasts around on our backs.”

He glanced toward the graffiti, expression serious. “Yes, well, don’t hesitate to call if something comes up.”

She followed him onto the front porch. He stopped when he reached the stairs and turned back to her. “I don’t know why you came back to Liberty, Ms. McCall, but little towns have long memories. People don’t forget. You’d be wise to keep that in mind.”

Justice for Sara manages to convey a great sense of place, even to someone like me who has never visited small-town Louisiana. I got a real flavour of the deep south and wanted to taste the gumbo and the fabulous sounding lemon drop Martini mentioned in its pages.

But most of all, I relished the cast of characters created by Spindler. Whether they are major or minor players, each is finely drawn and wholly believeable. A favourite is the busybody neighbour, Iris Bell, whose age and failing memory mean that she slips in and out of the present at will, much to the confusion of anyone who is trying to engage her in conversation—as displayed in this chat with Luke.

“Can I get you another glass of tea?” He jerked his attention back to Iris Bell.

She had him confused with his dad. “Stephen is my dad, Mrs. Bell. Margaret’s my mother.”

She looked at him wide-eyed, then blinked. “Such a lovely woman.”

“Thank you.” He set aside the glass. “I wanted to ask you a few questions about the night Sara McCall was murdered.”

“Oh dear.” She brought a hand to her throat, to the strand of pearls he had never seen her without. She toyed with them. “Such a horrible thing.”

“Whatever happened to her?”

“Did you mean, what happened to Katherine?”

He had the sense that the lights were on, but nobody was home.

Justice For Sara is a great summer beach read, so take out that extra sweater and make space for it in your case. It would make a perfect companion as you lounge on the sunlounger—and perhaps you might try a lemon drop Martini while you're at it? 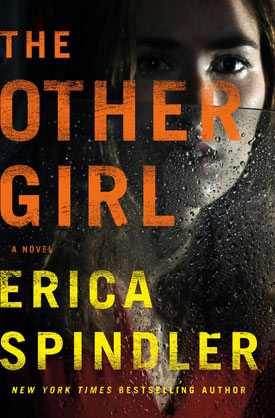 Erica Spindler Excerpt: The Other Girl

The Other Girl by Erica Spindler is a chilling new thriller about a ritualistic murder of a college professor that sends a small-town cop back into the trauma she thought she’d put behind her (available August 22, 2017). A horrific crime. One witness: a fifteen-year-old girl from the wrong side of the tracks, one known for… The Darkest Night by Rick Reed is the 5th book in the Detective Jack Murphy series, which finds the detective investigating a murdered cop, his partner's missing niece, and a shadowy voodoo cult.  If a mystery is set in the swamplands of Louisiana, then even during the day the title The Darkest Night applies. Unscrupulous,… Which New Orleans Crime Fiction Character Are You?

From telekinetic waitresses to grizzled war vets, New Orleans offers refuge for all types of people. With its historic past and modern rebirth, the city is a natural host to an array of crime fiction. In celebration of Fat Tuesday and Mardi Gras, we're asking everyone what New Orleans crime fiction character they are. Take…