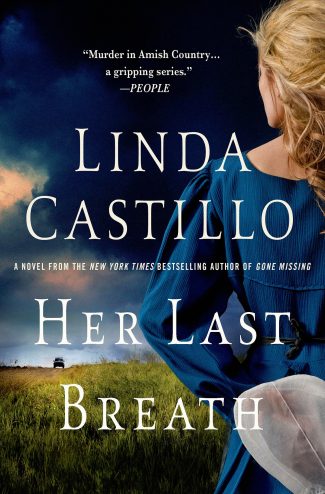 Her Last Breath by Linda Castillo is the fifth book in the Kate Burkholder series—a thrilling procedural centering on a deadly crash and a beautiful Amish woman.

Linda Castillo is back with the fifth installment of her exciting series featuring Kate Burkholder, the formerly Amish now current chief of police of the small town of Painters Mill, Ohio. Kate had an idyllic upbringing there until she turned 14 and was the victim of a crime perpetrated by another member of the community. The events of that terrible day and its aftermath eventually caused her to leave the fold. Unable to completely turn her back on her past, though, she chose to use it to her advantage, gaining the position of chief of police in part due to her familiarity with the local Amish, who trust her marginally more than they would any other outsider.

In Her Last Breath, Kate is called to a tragic scene all too familiar to those who live near the Amish. A buggy driven by a deacon was hit by a speeding driver, killing the man and two of his children. The speeder never stopped, and it soon becomes apparent that this hit and run was no accident: the buggy and its passengers were the target of a calculated execution.

Making it even more personal, the deacon was married to Kate’s childhood best friend, Mattie Borntrager, whom Kate has lost touch with since being placed under the ban of excommunication placed on all ex-Amish. Their reunion under these circumstances is not the happiest, but it’s hard to break the bonds of true friendship, even after a span of years:

[T]he weight of my connection to Mattie presses down on me with an almost physical force. I know all too well that when you’re a cop, any personal connection to a case is almost always a bad thing. Emotions cloud perceptions and judgments and have no place in police work. But as chief in a small town where everyone knows everyone, I don’t have the luxury of passing the buck to someone else.

And even as I vow not to let my past friendship with Mattie affect my job, I know I’m vulnerable to my own loyalties and a past I’ve never been able to escape.

While Kate is trying to focus on the cold hard facts of the case, her boyfriend is pressuring her—though gently enough—to move in with him. To complicate matters more, skeletal remains Kate had thought long buried are accidentally uncovered by a pair of teenage boys, bringing the secrets of her past roaring back to threaten both her and the rest of her still-Amish family.

Linda Castillo does a great job of balancing these different, intriguing plot threads. The primary mystery, especially, is so well done that I had to stop reading at the denouement; I was so stunned, I needed a moment to recover before I could plunge back in. But through it all, I was impressed by the raw honesty with which Kate’s special situation was treated. She’s been through a lot yet is still sensitive to the demands of both the worlds with which she’s familiar. Her reaction when the local bishop tries to minister to her is especially illuminating:

“[R]emember God always has a plan. It is not our place to question, but to accept.”

The words are intended to comfort me, but I wince. The tenet of acceptance is one of the belief systems I disagreed with most when I was Amish. Maybe because my own philosophy differs so profoundly. I refuse to accept the deaths of three innocent people as part of some big divine plan. I sure as hell don’t plan on forgiving the son of a bitch responsible.

Her drive leads her to a world of pain but, crucially, this is a pain she’s chosen to take on and accept as her own, in her capacity as protector of the people whose lifestyle and beliefs she cannot herself follow. Her Last Breath ponders the lengths that people will go to in order to escape their pasts for the futures they believe they deserve. In its depiction of the relationships between Kate and the people she loves, it also examines the subconscious ways we trust and how even the strongest bonds can be fraught with misinterpretation. Her Last Breath isn’t just an excellent thriller, it’s also a terrific look at desire and loyalty and how the two conflict.