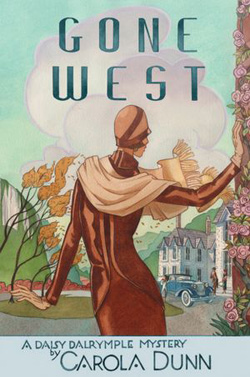 In September 1926, the Honourable Daisy Dalrymple Fletcher visits Sybil Sutherby, a school friend now living in Derbyshire as the confidential secretary to a novelist. Suspecting that something is seriously amiss, Sybil has asked Daisy to discreetly investigate. Upon arrival, Daisy finds a household of relatives and would-be suitors living off the hospitality of Humphrey Birtwhistle, who had been supporting them through his pseudonymous Westerns. When he took ill, though, Sybil took over writing them while he recovered, only to see the sales increase. Now, she fears that someone in the household is poisoning Birtwhistle to keep him ill and Sybil writing the better-paying versions. But before Daisy can even get decently underway, Humphrey Birtwhistle dies under suspicious circumstances and Daisy now faces a death to untangle, a house full of suspects and a Scotland Yard detective husband who is less than pleased at this turn of events.

Gone West, twentieth in the Daisy Dalrymple series by Carola Dunn, is set in 1926.  As this is the first in the series I’ve read, I can safely say it can be enjoyed even if you’ve never tried the series before.

Daisy, though the daughter of a viscount, is not wealthy, so works as a writer of magazine articles and coffee table books.  She is married to a Scotland Yard detective named Alec Fletcher, who also takes part in the story once the inevitable murder occurs.

What I particularly liked about this book is that, aside from the mystery plot, it gave a picture of England, eight years after the end of World War One, in which the effects of that war were still being felt in many levels of society.  I especially liked how Dunn focused on how the war had affected women.

For instance, when Daisy and her friend Lucy first meet up with their old friend Sybil, who is the connection to the mystery, they learn Sybil is widowed.

“What about you, Sybil?” [Lucy] asked with a hint of a sarcastic inflection.  “Have you settled into a life of cozy domesticity?”

Sybil flushed.  “Far from it.  My husband was killed in the War.  I was lucky enough to find a job quite quickly, as…as secretary to an author.  A live-in job, where I can have my little girl with me.”  Her hand went to her necklace. “I didn’t even have to sell Mother’s pearls.  And I’ve been there ever since.”

Daisy decided it was a bit late to start expressing condolences, which would inevitably lead to further, endless condolences.  Everyone had lost someone in the war including her own brother and her fiancé, or in the influenza pandemic, which had killed her father….

Sybil’s experiences as a widow who has to make her own way are, in microcosm, a view of post-war English society.  Many women across England, widowed by the war or unable to find husbands from the vastly reduced male population, had to move into the workforce in order to support themselves, and possibly their children or older relatives as well.  Their search for employment was made more difficult by class barriers (upper class women weren’t supposed to work) and the fact that returning soldiers took many jobs that women could have performed equally well.

“Outside this house, people think of me as a widow first, not as a competent secretary, let alone a writer. It’s just as well, really, as we don’t want people to know that last part.”

The way in which Sybil becomes a writer is quite realistic.  She takes a low-level position and then, through circumstance and her own skill, ends up working at a much higher level.

“…I started to notice inconsistencies, just odd little things like someone having blue eyes in one place and steely grey in another.  At first I used to draw them to Humphrey’s attention.  He didn’t really care.  He told me to put that sort of slip right without bothering him.  I began to do more and more editing.  It sort of crept up on me, until I was rearranging paragraphs to make them more effective or more logical.”

Eventually, she is writing the novels based on Humphrey’s plots; after the book ends, she plans to write her own novels, discovering herself as a writer.  Sybil is, I think, a good example of a powerful 1920s woman.  For comparison, Dunn also offers a female stenographer (a minor character, but vivid), a young woman who lives off a quarterly investment income, and an older woman who once worked as a teacher, but left it behind to marry.

If you’re interested in this historical period and its associated cultural changes, as well as “house party” mysteries, Gone West might be a good book for you to try.