Engaged in Murder is the first in the new cozy Perfect Proposals series by Nancy J. Parra, who also writes the Baker’s Treat Mysteries. We meet event planner Pepper Pomeroy, who’s ready to do whatever it takes to make her sister Felicity’s proposal to her boyfriend Warren absolutely special—even solving a murder. Warren wants her to decorate a private plane, and while her mind is busy cooking up elaborate ideas leading up to the big I Do, others have far grittier things in mind. Pepper is a perky heroine, as far from hard-boiled as you can get, and her first encounter with a dead body, and its immediate aftermath, is full of equal parts humor and horror:

I heard Jeb calling my name and ran out o the bathroom. “I’m here.” I hurried forward toward the open hangar door.

The hangar door was wide-open so he could see me from one hundred feet away. He hitched his gun belt on his narrow hips as he hurried toward me. “I thought I asked you to stay outside the hangar.”

“All right,” he said. His wide shoulders and muscular biceps were reassuring. “Did you touch him?”

“No,” I said and followed Jeb down the hallway. “I have to admit, I’m kind of worried that he may be more than passed out.”

“What do you mean by ‘more than passed out’?” He stopped at the bathroom door and studied me with his intense brown gaze.

Pepper isn’t one of those heroines champing at the bit to investigate crimes; she just wants to get on with her engagement planning, which turns into a full-fledged business when Warren—who springs his surprise wealth on Pepper’s family once he’s sure Felicity loves him for something other than his wallet—decides to bankroll her new business. When Warren becomes the prime suspect (he turns out to own the proposal plane and the dead man was a janitor at the airport), her time winds up being split between planning a Little Mermaid themed engagement complete with underwater treasure and clearing his name. Her sleuthing has a bit of madcap glee to it that keeps this mystery lighthearted, even when danger lurks. She faces off against Officer Vandall, who isn’t immune to her charms:

I smiled and leaned onto his open car window ad twirled the end of my hair. If donuts didn’t work, perhaps flirting would. Although I wasn’t the best at flirting, I’d recently read a book that said twirling your hair was a distinct sign of interest. “I’ve been so worried about that poor man whose body I discovered at the airport. I never did hear—did he die of a heart attack? Was there something I could have done to save him?” I had always been good at fake tears. It was my only talent besides party planning. I squeezed out a fat tear and quivered my bottom lip.

“Hey now, no tears,” Officer Vandall said and put up his hand as if that would stop me. “You could not have saved him.”

“Stop crying.” Officer Vandall opened the car door. “He did not die of a heart attack.”

“Oh, my God! Was he choking? Because I’m also trained in the Heimlich maneuver. I should have tried to sweep his throat and then put my knee in his back.” I put my hands over my face and let my shoulders shake. “I knew it. I knew his death was all my fault.”

Officer Vandall got out of the car and patted me on the back awkwardly. “No, no, he did not die of choking. Trust me. You could not have saved him.”

Pepper is able to wield her acting skills, dessert bribes and general air of cluelessness to keep pressing forward with her investigation. Parra plays up her first-time sleuth status, so every new clue is a major revelation. While the romantic element of the plot—Pepper dumps her boring boyfriend and begins a flirtation with his hot friend, Gage—is a bit too clichéd at times (eating chips and drinking wine in bed alone), her wonder at the gift of clue is contagious as she watches Felicity’s proposal video.

“What was that?” I grabbed my remote, knocking over the bowl of chips and leaning into the plate, crushing the crackers. I pressed stop and the thirty-second rewind. Mesmerized by the video, I pressed play. There it was. The clue I’d been waiting for.

Cesar had the camera on his shoulder and came down the stairs to give the viewer a shot of the plane. As he came around the front, I stopped Laura Snow in the danger zone of the plane behind the jet engines. Then I saw her opening the “authorized personnel only” door that Daniel Frasier had warned me to stay away from. That wasn’t what caught my eye. I mean, as far as I knew, Laura was authorized personnel. What caught my eyes was the fact that she was clearly talking to someone.

She had her left hand on her hip and gestured with her right. Someone else was inside the door. There! Was that blob a hand that waved toward her?

Even with this breakthrough, Pepper doesn’t get much support from the cops in charge of the investigation, so she has to go it alone in figuring out which of a handful of suspects is the culprit. This is a quick, light cozy, with a heroine who isn’t afraid to laugh at—and with—herself, but who can get tough when she needs to. 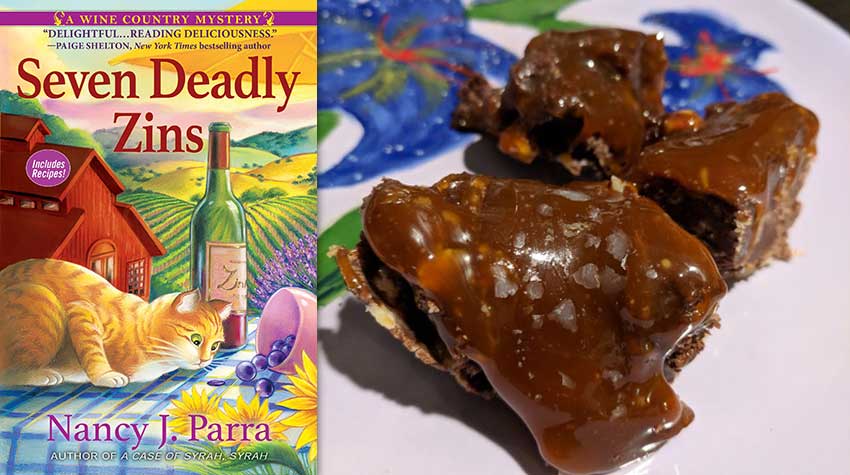 In the second book of the California Wine Country Mystery series, our heroine, Taylor O’Brien, has decided to do a favor for her friend Tim Slade. While Tim is independently wealthy, he’s starting to look for ways to expand the labor of love that is his winery. In order to help, Taylor puts his estate…