Jon McGoran’s Drift is the tale of Doyle Carrick, a Philadelphia narcotics detective who’s been temporarily relieved from duty thanks to some anger-management issues. Doyle plans to spend the duration of his suspension drinking alone in the quiet country house he inherited from his mother and stepfather; when he arrives at his new abode, though, he discovers that not only is somebody else already living there, but this particular patch of country is anything but quiet…

I love me a good thriller. Trouble is, they’re getting harder and harder to find. Too often, in an effort to make a thriller seem more thrilling, character development takes a back seat to pacing and plotting, and while the end result is entertaining, it leaves you feeling fed, but not sated.

Such is not the case with Drift. Sure, there are a lot of books out there that star a hot-headed cop with a fondness for whiskey, but in most of those books, said cop reads like he’s straight out of central casting. Not Doyle Carrick; he’s no mere archetype. The finished product resembles the template about as much as a stick-figure does a real live boy. While the stock version of this character is often non-specifically angsty, Doyle’s got a legitimate reason to brood:

But when it got really late, when I finally drove those thoughts from my mind, that’s when it hit me that my mother was dead, and so was Frank.

Lying in her house, in the quiet and the dark, I could feel the presence of her absence, a cold, hollow ache that I’d been desperately trying to avoid. Memories of my childhood came back—the days before Frank was on the scene, the days when it was just my mom and me: trips to the beach, meetings with teachers, an awkward talk about condoms, lying on a blanket in the backyard looking for shooting stars. Christmas morning with my dad.

That last one blindsided me, so stunningly vivid I gasped. There was my dad, Christmas morning, bleary-eyed and unshaven, wearing his plaid flannel robe, a coffee cup in one hand, his other arm around my mom. They were both looking down at me as I opened a present, the tree blinking and twinkling to my right.

I hadn’t thought about that moment in years, but I remembered it clearly. I had just unwrapped the remote control stunt car I’d been wanting since early the previous January. The smell of coffee and bacon hung in the air, and I looked up at my mom and my dad, and I thought to myself that life couldn’t possibly get any better.

As it turned out, I was right.

The hollow ache opened into a chasm, a deep sorrow I hadn’t felt since I had started covering it up at my father’s funeral.

And while a great many of Doyle’s fictional peers are generically moody and bitter, McGoran hints that Doyle’s anger may have a root cause of which even he isn’t aware:

I felt a surge of emotions, but before they could assemble into anything coherent, I caught a whiff of smoke and ashes, the faint but acrid smell of something burnt that was not meant to burn. The hairs on my arms rose up as I recognized the smell from my nightmares. I quickly slid the watch back into its envelope. But before I could put the envelope back in the box, I saw something that stopped me.

“Meredith Carrick,” it said across the top. Scanning it, I picked out words like “protection from abuse” and “battery.” I felt a jarring sense of disequilibrium. I’d had my problems with Frank, especially in the early days, but strangely, in the days since he died, I felt closer to him than ever before. Now this. I would never in a million years have suspected him of this.

At first it made no sense to me. Then it came back in snippets: arguments, shouting and cursing, broken furniture, tears. Apologies. I remembered driving with my mother at night, wondering where we were going. It was a school night, and it was an adventure, staying in a hotel, but the gnawing feeling in my stomach came back to me so clearly that I felt it again sitting there on the floor. I remembered coming back home the next day and knowing that my dad no longer lived there.

It’s not just McGoran’s hero that gets the full-flesh treatment, either; every member of his core cast is similarly three-dimensional. Take Nola, Doyle’s pretty next-door neighbor who has a degree in horticulture and runs an organic farm. Nearly all science-based thrillers feature some well informed character who’s passionate about the cause at the heart of the mystery and whose job is it to explain things. Typically, this character is altruistic and self-righteous, and therefore annoying as hell. But not Nola. She may be opposed to the use of pesticides and the genetic modification of crops, but her opinions on ecology are far from philanthropic in origin:

“So were you allergic to the chemicals?”

“Apparently. Not allergic, but sensitive. They said I have something called MCS, Multiple Chemical Sensitivity.” She shrugged. “Anyway, my mom asked the neighbors to stop using the lawn chemicals, and they weren’t crazy about it, but they stopped and I got better.”

“The MCS? Who knows? Some people don’t think MCS is even real. I’m not entirely sure myself. One doctor said that’s what it was; the other doctors said she was a quack. A couple of years later, it happened again, a lot worse. It can get worse each time it happens. It’s progressive. That time my apartment building got new carpet in all the hallways, and no, they were not going to get rid of it.”

“I’m fine. I just have to be careful. Some people have it so bad they can’t come into contact with anything, perfumes or dyes, anything sets them off. And people think they’re crazy, or making it up. My friend Cheryl, for example. After her third episode, she just basically didn’t get better. Now she lives totally chemical-free, in a house out in the woods. But she has to go out sometimes, and occasionally she’ll have a reaction to something. That’s who I was with when I missed your mom’s funeral. Compared to her, I’m lucky. I live my life, I eat in restaurants, travel on planes. It’s generally not a problem, I just avoid places with lots of chemicals. For me it’s mostly just pesticides and herbicides.” She smiled. “That and cheap carpet. Anyway, when I started looking into it, I was shocked at some of the chemicals that are getting into the food stream. That’s what got me into organics. And it’s not just the chemicals.”

“Well, all of it. The GMOs, the clones, irradiation.” She got up and went to the kitchen. “It’s like food isn’t food anymore.”

Her crunchy ways serve a selfish purpose, and this not only gives her character depth, but it makes her zealotry more tolerable and her passion more believable, as well.

McGoran even gives the token Local A**hole Cop—a staple of nearly every mystery every written—a valid reason for…well, being an asshole:

“Don’t mind him,” she said, ushering me into the records room. “He takes protecting this town very seriously.”

“Really?” I asked, following her down an aisle of shelves.

She shrugged. “There’s been a lot of new faces in town lately, a lot of change. People are suspicious of outsiders. And I’m not talking about the Mexican workers or any of that—that’s something different. I’m talking about outsiders who come in and tell folks the way they’ve been doing things for generations is wrong.”

“Well, like your friend Ms. Watkins. She’s a delight. But all this organic stuff? I’m sure she didn’t mean to offend anybody, but when you come in saying the way you’re doing things is better than the way everybody else is doing them, even if you don’t say it, it rubs them the wrong way. You’re with the police back in Philly, right?”

“Right.” I didn’t feel the need to explain the nuances of my current employment situation.

“Well, Chief Pruitt is probably a little defensive about that, too. Big-time city police coming in telling him how he’s doing things wrong.”

“Doesn’t matter what you said or didn’t say. He’s filling in all those blanks himself.”

Thanks to McGoran’s efforts, the cast of Drift comes to life on the page. Every character has a distinct backstory and a unique and fully developed personality, and as a result, every word they speak and every action they take rings 100% true.

I wish more thriller authors would take a page from McGoran’s book; maybe then I wouldn’t have such a hard time choosing a winner at my local bookstore. Strong characters heighten the tension of every interaction, make the plot more believable, and make it that much easier to become fully invested in the story. They’re what elevate Drift from Thriller to Damn Good Thriller.  And they’re a big part of what will make me first in line for his next book. 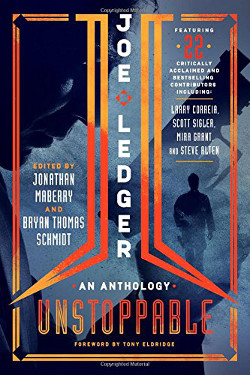 Joe Ledger: Unstoppable, edited by Jonathan Maberry and Bryan Thomas Schmidt, is an original collection of stories in the Joe Ledger universe. I’m an unabashed fangirl when it comes to Jonathan Maberry, and Joe Ledger is one of my absolute favorite characters. The Joe Ledger books (Patient Zero, The Dragon Factory, The King of Plagues,… “Down to Zero” by Jon McGoran

“Down to Zero” by Jon McGoran is a new ecological thriller short story featuring Detective Doyle Carrick! This exclusive serialization on CrimeHQ will break the story into 4 parts throughout the rest of this week. Be sure to check back each day for more, or if you can't wait, scroll to the bottom and buy… Dust Up by Jon McGoran is the 3rd Doyle Carrick ecological thriller (Available April 19, 2016). Detective Doyle Carrick is awakened in the middle of the night by frantic banging on his front door, followed by gunfire. Ron Hartwell, a complete stranger, is dying on his doorstep. A halfhearted investigation labels the murder a domestic…