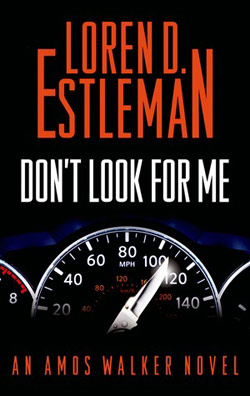 Loren D. Estleman has been making the Lifetime Achievement rounds of late, and I for one couldn’t be happier. When I want a strong sense of place, snappy dialogue, enough twists to keep me guessing, and a protagonist hard-boiled enough to bend steel, I always pick up an Amos Walker story. Reading about Amos’s exploits is how I deal with my Michigan-refugee homesickness, and the dialogue, straight from a black-and-white movie, keeps my brain nimble. Don’t Look for Me, the 23rd book in the long-running series, didn’t disappoint and delivers everything Estleman fans have come to expect.

Alec Wynn is one of those slick money guys who works in a tower of glass and has all his clothes tailored. He’s also the kind of guy who can hire a big PI firm with a fleet of employees, but he makes an appointment with Amos, who is so one-man he’s in danger of being no-man. Amos isn’t a Timex in a digital world so much as he is a sun-dial:

These big box agencies are a whiz with computers and blood diamonds and those teeny little cameras you can hide in your belly button. When it comes to stroking old ladies who see things and leaning on supermarket stock boys who smuggle sides of beef out the back door, they remember us little shows.

Charming may not be the right word when talking about Detroit, but Estleman writes it with a brutal affection that I think only a true local can muster. It’s a city that was born to be the setting for crime novels, because the real life corruption that can, and has, run amok over generations, is more bizarre than anything a writer with too little sleep and too much scotch on an empty stomach can dream up. Even the most imaginative of writers will find themselves triple-dog-dared by what the real life Detroit has cooked up over the years:

“The FBI’s watching the PD, the state cops are watching the crime lab, and the governor’s watching all three looking for a reason to run the city direct from the capital. A conscientious citizen thinks twice before he jumps into the middle of a three-ring circus. I call that self-protection.”

Estleman knows Detroit, and Michigan, like the back of his hand (or mitten, as the case may be). If you know the city, if you know the state, there is always at least one gem in an Amos Walker story that will have a Michigander jumping up and saying, “Yes!  That’s it, exactly!” Even if you wouldn’t know the state if you tripped over it, every syllable used to describe Detroit, describe Michigan, is what is more popularly known as “world-building.” Estleman could teach a master class on the subject.

Our January thaw had come right on time in mid-February, followed by another Arctic episode broken up by two days in the seventies, which were capped off by the biggest blizzard in years. We were three weeks short of Easter, and where the earth had turned to snot under the pavement, stalagmites of ice had formed in the potholes like miniature tiger traps. Everywhere else it’s called climate change. Here we call it Michigan.

This Amos, on his 23rd adventure, should by all accounts probably be dead. My conservative estimate is that he’s suffered somewhere in the ballpark of 25 concussions over the years. In real life, Amos would have died in 1985 or be in a nursing home unable to care for himself. However, that’s the beauty of fiction—hard-nosed guys that are barely housebroken, like Amos, live to fight another day and always have just the perfect wise-crack ready to toss out like a hand grenade in the middle of a street fight. If that’s not Detroit, nothing is.

Wendy Crutcher, Fighting For Truth, Justice and the Right to Read What You Want.

Read all posts by Wendy Crutcher on Criminal Element.

Book Review: The Eagle and the Viper by Loren D. Estleman

One man can make history; another can change it. A high-octane historical thriller, The Eagle and the Viper from novelist Loren D. Estleman reveals how close our world came to total war. Prolific author Loren D. Estleman turns his attention to a novel that mixes actual historical events with speculative fictional events in sort of… 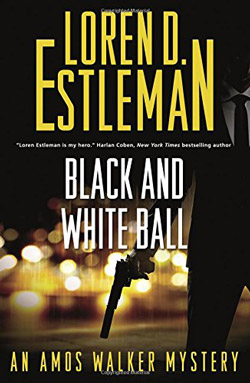 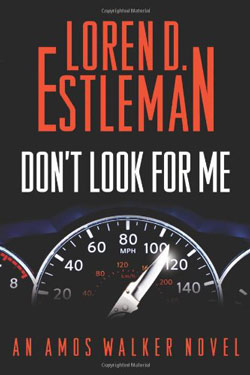 Discount: Don’t Look for Me by Loren D. Estleman