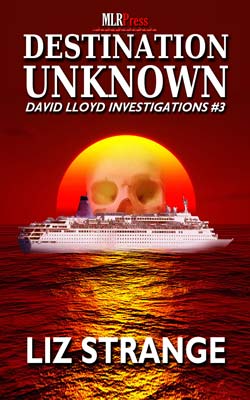 Perfection is a flaw. This is how Liz Strange views her characters. David Lloyd is no different. This ex-cop turned private investigator can take a punch, feel compassion for a former hooker and never miss Sunday dinner at Grandma’s.

So how does Ms. Strange balance this man of every woman’s dreams? Well first I should say every man’s dreams. David is gay.

David Lloyd’s homosexuality isn’t as much of a challenge in this installment of the series. Previous books addressed the trials of David being gay and also an officer of the law. I think part of her challenge in writing from a gay man’s perspective is to keep David’s emotions in check. Strange avoids making him a stereotype.

David assesses the situation of his latest case, the disappearance of Piper Falco, a college student working on a cruise ship.

An average of fifteen people go missing from cruise ships each year. The data on assaults, thefts, and rapes was no less grim, reminding David of the unending supply of lowlifes that do, and always would, prey on the weak and naïve.

No wonder I’m always so busy.

The case takes David and his lover, Jamie who is also his lawyer and business partner to Curacao to follow the trail. Despite the seriousness of the situation, Strange injects a little humor.

“Something is not adding up. You know I’m going to have to go down there, to Curaçao, and I’m going to need to search the ship, talk to the crew and all that.”

Jamie smirked. “What a hardship.”

“You could come with. You make your own hours now, after all. Could be like a mini vacation.”

“You romantic, you,” Jamie said with a chuckle. “A disappearance, possibly even a murder case is not my idea of a vacation.”

Outside of a few PG-Rated bedroom scenes and innuendos, Strange keeps the story on the case.

That’s not to say her characters lack depth. She makes it a point not to make her protagonist cold and callous. David does have a soft spot for Jenny, the ex-prostitute for whom he’s taken on the role of big brother.

From her days on the street she’d discovered the public library was a place where she could stay for several hours without issue, allowing herself to get warm and have access to clean washroom facilities. An accidental by-product had been discovering she liked reading, and in turn it became a haven for her mind as well as her body. The girl was smart as a whip, and David was pleased she’d decided to use her gifts for the betterment of her new life.

He even plays matchmaker between a librarian named Margaret and John, an ex-cop and friend from his former police days.

When Piper’s teenaged sister, Marigold, shows up at David’s house, he offers her some tea and his ear.

This is becoming a home for wayward and troubled young women, he thought. What the neighbours must think.

To balance these kind gestures, Strange casually mentions David’s hearing aid during a recovery scene at the hospital.

“How the hell could this have happened?” Jamie was seriously rattled if he was using the f-word.

“I don’t know,” David answered. “I’m having some trouble hearing you. Where’s my hearing aid?”

“Oh God, sorry.” Jamie fumbled around with the bedside table before coming back with the device in hand. He gently placed it in David’s ear. “They took it out when they were working on you.”

The audible world came into focus after an initial ring so sharp David had to grit his teeth to bear it. He became aware of the muffled sounds of the staff in the hallways, and the beeping from the machine tracking his heart rate, even the crumpling of the sheets from Jamie’s movements. “That’s better. Thanks.”

Strange develops an overloaded situation for her detective to handle. David Lloyd seems to be on a mission to save everyone around him. Several kidnappings, abusive family situations, sex-trafficking victims, ex-prostitutes and lonely hearts. Eventually the character realizes he needs to do something to help himself.

First things first, he put in a call to Dr. Garfield’s office and booked a time with the man later that morning. Getting some things off his chest certainly wasn’t going to hurt him, and he couldn’t deny it was nice to know that someone was concerned about his emotional well-being. Not everyone could say the same.

Maybe part of the reason it seems David Lloyd needs to be a superhero lies in the fact that Strange is also a noted writer of supernatural stories. Vampires, horror and fantasy are her specialty. She’s not afraid to challenge you to stretch your imagination.

In a story where no one is exactly as they seem, Destination Unknown provides enough twists and turns to keep you following the trail to find Piper without losing your way.