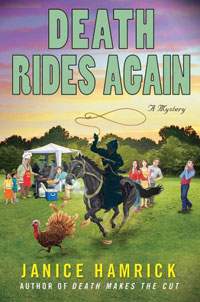 Death Rides Again is the third book in the highly acclaimed series featuring school teacher Jocelyn Shore. But before I tell you all about it, I want to remind you that Janice Hamrick won the 2010 Mystery Writers of America/Minotaur Books First Crime Novel competition for Death on Tour in which the reader meets Jocelyn for the first time while she is on vacation in Egypt.

And it was just about this time last year I told you all about Jocelyn coming home and settling in to the opening of a new school year filled with chaos and murder. Death Makes the Cut is a terrific book and you can read about it right here.

I ended that post by saying I hoped we’d have another Jocelyn Shore novel soon, and finally (I was getting tired of waiting) Death Rides Again is here.

As always, Jocelyn spends a lot of time with her super gorgeous, gun totin’ cousin and best friend Kyla. One major treat in this book is that Jocelyn and Kyla have headed out of Austin and into the countryside for a Thanksgiving family reunion on their uncle Kel Shore’s ranch. So we get to meet the entire Shore clan and although I expected more up front humor, right off the bat we can see why fun has turned out not to be a priority for the family at this particular get together.

Just read the opening two sentences of the story for yourself:

The day Eddy Cranny got himself murdered started bad and went downhill from there . . . especially for Eddy. My first indication things weren’t going well was waking to the unmistakable snick of a break-action shotgun snapping shut.

Eddy Cranny is married to Uncle Kel’s daughter, Jocelyn’s younger cousin Ruby June. When Jocelyn follows the noise and rushes into the kitchen, Uncle Kel is the one holding the shotgun. His reason? Eddy has not been the gentleman he ought to be. It takes a bit of cleverness on Jocelyn’s part to talk Uncle Kel out of blowing Eddy’s head off.

Within the next hour or so, Jocelyn and Kyla go to the feed store where Kyla is happy to get a chance to threaten Eddy, both women overhear Kel’s business partner Carl bragging about a scheme having to do with the R. “Blackie” Roberts Memorial Fairground and Racetrack, home of the big Thanksgiving horse race. Shortly after, they meet one of Kel’s neighbors, T.J., who seems confident that his horse will win the big purse on race day and invites them to his house for a post race party.

Before the Shore family can fully celebrate the gathering of the clan, Ruby June goes missing and then her husband Eddy is found dead. So many people know about the battle between Kel and Eddy, that Kel becomes an early suspect. Or is the missing Ruby June to blame?

And then there’s Jocelyn’s love life which has been in a state of confusion of late. At one point Aunt Elaine mentions Jocelyn’s boyfriend to Uncle Kel, and here’s the response:

Kel looked from her to me with a sour expression. “Boyfriend One or Boyfriend Two? Or are there others we don’t know about yet?”

Now that’s a question deserving of a response. So, what is Jocelyn’s solution to her romantic woes? I’ll never tell. You’ll have to read the book to find out.

Along with the crime of murder, the story line tackles issues that families like to pretend only happen in someone else’s family. Throughout it all, Janice Hamrick still managed to present the extended Shore family in a fun and engaging way.

If you are planning on following my suggestion to read Death Rides Again, my only caveat is—keep an eye on the goat.

Terrie Farley Moran’s recent collection of short stories, The Awarness and other deadly tales, is currently available in e-format for the Nook  and the Kindle. Terrie blogs at Women of Mystery and is presently writing a cozy mystery set in southwest Florida.