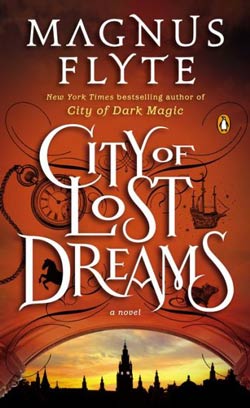 The City of Lost Dreams by Magnus Flyte is the second adventurous mystery set in  a Europe where magic, science, and alchemy are all valid. In it, musicologist Sarah Weston and her friends—drunken dwarf Nico Petusato and her former lover Prince Max—will chase a villain through history and fight even death itself (available November 26th, 2013).

The City of Lost Dreams was my first taste of author Magnus Flyte, and now that I’ve sampled, I find myself asking for seconds. That really doesn’t accurately explain my reaction—I loved it. The crisp writing, fast and neatly-trimmed sentences that tumbled one after another without too much fluff or unnecessarily pretentious words kept my attention throughout the book. Also noted, I read this one in a little over a day, only putting it down for sleepy time and the unavoidable daily routine. Yes, it was that good.

The name Magnus Flyte is really a pen name for authors Meg Howrey and Christina Lynch, two talented ladies who bring a style to their writing that is fast, clear and concise, yet employs an entertaining flair and, at times, a perfect balance of whimsy. Their ability to spin a yarn that pulls the reader along on a flying carpet ride of mystery, comed,y and romance is top0notch. Some of the elements included in the book: a galleon automaton that sprays wicked drugs in the face of unsuspecting victims, alchemy and an immortal dwarf, a race to find The Fleece—a book that holds the answers to everlasting life and the ability to cure afflictions, hell portals, a complicated love triangle and Mesmerism, just to name a few. This thing employs a mystery that deepens like the sudden drop off of a sandbar.

The characters were fully fleshed out, almost all of them, in fact. I particularly liked how each main character had at least one chapter dedicated to their point of view, which allowed the reader to slip inside of their heads and become more intimate with them, and gain a little perspective and understanding of how they fit in with the story. I’ve seen this done elsewhere, and the results were a muddled-up storyline with too many points of view that became too complicated to follow. That was not the case here. It was handled with aplomb.

The story had the feel of being part-history lesson, but not the dry, put-you-to-sleep-in-your-chair kind I remember from school, rather it was a kick-ass, keep your attention and make it sound like you’re eavesdropping on a very juicy conversation between a dysfunctional family type of history. Seriously, these gals sure know how to recite facts and weave them into the story while keeping it interesting, not taking away from the excitement or slowing down the pace. Instead, the history sometimes added to it.

There weren’t many people in the cathedral today, though it was an impressive place. Like much of Prague, it was steeped in a complicated history and awash with emotions great and terrible. It was here that the Czech patriots who had assassinated the Nazi Reichsprotektor Reinhard Heydrich had made their last stand on June 17, 1942. Despite a misfiring pistol, they had managed to wound the bloodthirsty and cruel Heydrich on May 27, and the squad, which had parachuted in from London, had evaded capture while he languished. But when Heydrich finally kicked the bucket, the Gestapo had gone into high gear, and tortured people until they got answers, including showing one child his mother’s head in a fish tank. Once the Nazis knew that this church was the hideout, they began to try to force out the squad with tear gas and bombs. You could still see the bullet holes in the walls and visit the crypt where the squad had committed suicide rather than be captured. All that had happened right here, where Max was sitting, not paying attention to the priest.

There was a clarity in the setting that allowed me to feel as if I was in Prague or Vienna. The imagery was succinct and precise.

Being a piano player myself, I enjoyed the many passionate descriptions and mentions of Beethoven. It was a nice addition to the story, and one that almost everyone should be somewhat familiar with, if even for his name alone. After reading it, I now want to delve into facts about the renowned composer. Another fascinating tool of the novel was the brilliant but dangerous pill called Westonia that allows one to travel back in time and witness certain events. The drug’s effects and even impacts afterward were described intricately throughout the story:

After the drug, Max had never been able to see anything quite the same again.

“It can’t cure Pols, but it’s going to take you where you want to go,” whispered Nico. “All you have to do is open your eyes.”

Aside from a couple of steamy scenes, the intimacy was kept to a minimum. Again, this is my preference. I would rather have action pulling me along, but you won’t hear me complaining when there’s a quick, hot and hard-hitting, pardon the pun, bit of sex thrown in.

Entertaining, thrilling and downright exciting are three words I would use to describe this book. I plan on grabbing the first book in this series, City of Dark Magic, as soon as possible. I have to know more about this group of unlikely friends and their adventures.