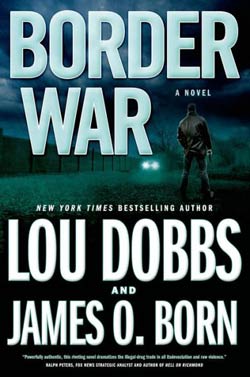 Border War by Lou Dobbs and James O. Born is the suspenseful thriller about the struggles of FBI Special Agent Tom Erikson after a questionable shootout on the Mexican border leads to his reassignment to an office known as “the Island of Misfit Cops” (available May 6, 2014).

The action which kicks off with a bang, taking us to El Paso and into the dusty, bullet streaked world of FBI Special Agent Tom Erikson. Gangsters, double-dealers and unfortunate victims pop up in greater numbers than the cacti standing guard on the border, by the Rio Grande river.

Erikson and good friend John Houghton, a veteran of Homeland security, are on duty keeping a watchful eye out for the unfortunate human flotsam streaking across the border, in search of a better life. Big and easy money attracts big gangsters, though they are never the ones actually crossing in the dead of night with human cargo. The trail leads to them eventually, but first you have to catch the little fish to find the big ones which feed off them. Erikson and Houghton are not alone, they have colleagues with them  from Border Patrol, friends who are “tough and smart and worked hard at a job seemingly no-one wanted them to succeed at.”

Joe Azeri, a New jersey career criminal is standing inside the drainage system which starts on the Rio Grande, surveying the scene before getting the operation moving. He has eleven illegal immigrants in his party, but he doesn’t think of them as people, but rather as “widgets”—income, money, cash. Cash is Azeri’s nickname after his donning of a black shirt one night on a previous run. Being that black was difficult to see at night, he always wore it, just like Johnny Cash.

In addition to the unfortunates being ferried that night, Cash has assistants—gangsters from various ethnic backgrounds.  One of his tasks that night is to dispatch one of them with a silent bullet in a way which makes it look like he was killed by the border agents, over eager to exchange fire. Simple and straightforward, if he gets it right then his career with the mob will continue on an upward spiral. But things never go simply, and Lou Dobbs and James O. Born make sure this tale is no different.

The bullets fly and some people make it across the border. It should have all settled down, but Tom Erikson likes catching criminals marking that evening as the beginning of the end for the mob as loose ends become looser and tongues start to wag. The biggest loose end is one of the illegal immigrants who helps a fallen agent who has taken a bullet. We also find out more about Erikson:

Erikson was about to knock the middle-aged man away from the wounded Border Patrol Agent, but he paused for a moment because it looked like the man knew what he was doing. Then he sank to his knees to see if he could do anything, but the man snapped in English, “I’m a doctor. Let me help this man.” There was something about his bearing and manner that instantly convinced Erikson to let him do his job.

Another Border Patrol agent raced up, taking a moment to assess the situation and deferring to the man who was carefully searching for the source of blood under the Border Patrol agent’s shirt. It looked like a bullet had slipped under his arm and above his ballistic vest.

John Houghton rolled past and called for Erikson  to follow him. For an older guy, he could move pretty fast. Erikson left the doctor helping the Border Patrol agent and tried to keep up with his partner. He had played lacrosse at Harvard, and it helped him immensely at the FBI Academy in Quantico with the daily physical training and the rigorous fitness tests, but it had been tough to keep that level of fitness in the real world.

The action switches from the dust of the Rio Grande to downtown El Paso and the tale crackles along as the bullets fly, taking out one wrong person after the other. In this tale of greed and dark dealings veryone gets shot at or shot at some point. A large multi-national corporation with devilish executives appears, as you would expect in any self-respecting crime thriller, as do the vocal Senator, the larger than life television executive, the scheming mistress, and the psychotic gunmen.

It is a good story with enough twists to keep you stuck to the pages which rock and roll all around El Paso. I can’t make up my mind whether it makes me want to visit or not. The jury’s out on that one. You certainly get a lot of bang for your buck, as there is more than one double-dealer in the myriad of characters which make up this pack of cards. The writing is tight, sharp, and sparse and words are not minced which is more than be said of the unfortunate people along the way who bite the bullet. They shall of course, remain unidentified in the name of not spoiling a good read.

The room was plain, bright and typical of a government office. Piles of old magazines were stacked in one corner, and shelves full of out-of-date statute books crowded the far wall. A single wobbly table with four chairs filled the center of the room.

The overhead lights of the Border Patrol office hurt Tom Erickson’s eyes as he sat there hoping to appear calm. In fact, he had shit calm out two hours ago in the men’s room, Now he was close to complete confusion. He’d never been in a firefight before. Most cops never have to fire their guns during their entire careers, and even fewer FBI agents got into shootouts. He’d been in fights and didn’t back down from trouble, but the aftermath was a bitch.

Avail yourself of this border tale and you will get a lot more than just a tale of cacti and dust, and I guarantee there will be no aftermath.