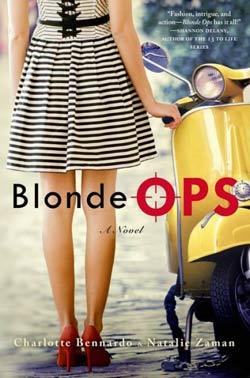 Blonde Ops by Charlotte Bennardo and Natalie Zaman is a Young Adult, tech-savvy romp through Rome where Bec must juggle her job at a fashion magazine, a potential threat to the First Lady, and of course, boys (available May 6, 2014).

Teenage hacker Bec Jackson has been kicked out of her latest boarding school after yet another poor personal decision. She kinda hopes this means her wealthy parents will now have run out of academic options and have to spend time with her (for a change,) but she’s in for a rude surprise when she finds herself whisked off to Rome instead, to intern for her mother’s old college pal who happens to be editor of the fashion magazine Edge.

Once there, Bec has to deal with being a fish out of water, but at least Mom’s friend, Parker, seems willing to nurture Bec and help her adjust. Just as the Edge staff are gearing up for a high-security photo shoot with U. S. First Lady Theresa Jennings, Parker, a dead ringer for their VIP guest, is involved in a near-fatal traffic accident. Enter Candace Worthington, model, fashion personality and interim Edge editor, who immediately puts Bec on a much shorter leash. When it soon becomes clear that the First Lady is under threat, headstrong Bec gets involved both in protecting her and in finding out what really happened to Parker, even as she juggles the interest of two dashing boys who may not be everything they seem.

Blonde Ops, by Charlotte Bennardo and Natalie Zaman, is a romp of a teen spy novel that jinks as unexpectedly as one of the exhilarating Vespa rides our heroine takes through the streets of Rome. It’s fun to read how Bec adapts to her latest challenges, using both her tech-savvy knowledge and the materials she has on hand to solve problems:

I pulled my pencil case out of my backpack, retrieved my makeup kit from the bathroom, and took out my black eye shadow, blush brush, and some clear tape. I locked the door against someone coming in, then like a CSI investigator hunting a serial killer, I dusted the surface of the desk and the envelope from Dean Harding. Real detectives used a special black powder. I would have to make do with MAC Onyx Dust.

Using the brush, I gently swept the powder away and a number of fingerprints appeared. I took a picture of each with my phone, then using the clear tape, lifted the prints off.

Once she snags fingerprints from her suspects later, she deduces the identity of their owner:

[T]hrough the Compare/Contrast app on my phone. Who knew an app designed to compare designer handbags to see if you bought the real thing or a fake could also be used for comparing other things—like fingerprints.

It’s also really neat to watch Bec go from hacker-chick who’s skeptical of the new world she’s been thrust into, to a girl who embraces the delights of both Italy and fashion. The authors do a good job of explaining the appeal of both, with beautiful passages describing Rome as well as more philosophical ones such as this exchange Bec has with a co-worker:

“Fashion is in the sky, the street.” She went on,” It has to do with ideas, the way we live, what’s happening. It’s the ultimate form of personal self-expression.”

She smiled. “That’s Coco Chanel—paraphrased, of course. I love finding the connection she and so many other designers see between fashion and life.”

In addition to providing great descriptions of these subjects, this YA novel also knows what it’s talking about when it deals with hacking, which greatly pleased the tech-geek in me. And while well-researched, it never gets heavy-handed, providing overall a light tale of skullduggery and high fashion in one of the most romantic cities in the world. Blonde Ops is a great gateway book for young adults looking to branch out from teen romances to thrillers and spy novels.