I met Blaize Clement in 2006, a little more than a year after her first book in the Dixie Hemingway series, Curiosity Killed the Cat Sitter, was published. She was a presenter on a panel for new writers. I was a new writer and very impressed with her advice. In a kind yet firm voice Blaize emphatically told us to believe in the importance of our work and to protect the integrity of what we write. I had only to read a few chapters of her first book to recognize that she practiced what she preached. Her writing is crisp and clear, with shades of gritty darkness brightened by straight forward humor and the always delightful animals Dixie hangs out with in the course of each book.

The Cat Sitter’s Pajamas is the soon-to-be-released seventh book in the series. Always upfront in her conversations with the reader, Dixie describes the resort atmosphere around Sarasota which includes her home on the barrier island, Siesta Key.

I live here for the same reason so many famous people have second or third or maybe eighth homes here—because it’s a paradise of riotous colors, balmy sea breezes, cool talcum sand beaches, and every songbird and seabird you can think of. Snowy egrets walk around in our parking lots, great blue herons stand vigil on people’s lawns, and if we look up we see the silhouette of frigate birds flying above the clouds like ships without a home.

My only claims to fame are that once I went totally bonkers while TV cameras rolled, and later I killed a man. I was a sheriff ’s deputy when I went crazy, but I didn’t kill anybody until after I’d got myself more or less together and became a pet sitter. Pet sitting is a lot more dangerous than people think.

So in two short paragraphs, you know all that you need to about the setting (gorgeous) and the heroine (self aware and unapologetic.)

And yet, further into the book we see how vulnerable Dixie, who lost her husband and daughter in an accident a few years before, can be.

A sweet- faced woman stepped to the deli counter between two little girls, each gripping one of her hands as if she were a maypole. Identical twins, the girls looked to be about six years old, the age Christy would have been if she’d lived. I had a momentary hardening of veins and muscles and lungs, an involuntary blend of rage and yearning and jealousy that this woman had two children and I had none.

The plot line of this book far surpasses small town murder and introduces levels of international intrigue you wouldn’t expect in a sleepy resort area of Florida. And that is Blaize Clement’s gift—she writes so convincingly about the unusual that I found myself thinking, “Oh, my, I should have known about that.” But I didn’t, not until I read The Cat Sitter’s Pajamas.

Blaize Clement’s many fans were saddened by her death this past summer.  However, Blaize recognized that possibility and worked with her son, John, who is now under contract to write at least two more Cat Sitter mysteries. We’ll all miss Blaize Clement but will think of her fondly and often because Dixie Hemingway will be around to entertain readers for years to come.

According to Terrie, writing short mystery fiction is nearly as much fun as hanging out with any or all of her seven grandchildren. She is editor of the recently released Sisters in Crime New York/Tri-State chapter anthology, Murder New York Style: Fresh Slices, and blogs at Women of Mystery. 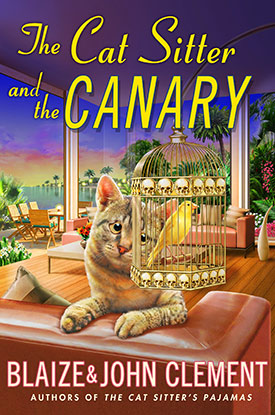 Review: The Cat Sitter and the Canary by Blaize & John Clement

The Cat Sitter and the Canary is the 11th book in the Dixie Hemingway series (Available December 20, 2016). Depending on the number of feline clients you can accrue, being a cat sitter can be a lucrative activity. It’s a worthwhile and harmless profession, but you will inevitably need an actual human being to invoice—cats…

The Cat Sitter and the Canary: New Excerpt

The Cat Sitter and the Canary is the 11th book in the Dixie Hemingway series (Available December 20, 2016). This time, Dixie finds a tall, handsome tourist loitering around the home of one of her long-time clients. He tells her he’s just arrived from Scotland and that he’s lost his glasses, which presumably explains why… Discover (or remember to order) your next cozy with a delightfully convenient shopping list of upcoming soft-boiled mysteries! Last month, we gave thanks for the great list of books that was November's releases; this month, the holidays come early with some amazing December reads! Let us know in the comments how you like it and… Discover (or remember to order) your next cozy with a delightfully convenient shopping list of upcoming soft-boiled mysteries! Last month, the books were just as nice as the weather with May's releases; this month it just keeps getting hotter with amazing June reads! Let us know in the comments how you like it and what…