Arsenic and Old Puzzles by Parnell Hall is the 14th book in the Puzzle Lady traditional mystery series (available January 22, 2013).

Everyone in town knows quirky, sarcastic Cora Felton as the famous Puzzle Lady. Her crossword puzzles, along with her photo, run in newspapers across the country. What most people don’t know, however, is that she doesn’t actually create the puzzles, nor could she solve one if someone held a gun to her head. However, due to Cora’s notoriety, she’s the first person the chief of police calls when he needs a Sudoku puzzle solved. The problem is, the puzzle was found on the body of a dead tourist at a local bed-and-breakfast run by the Guildford sisters.

When more bodies turn up, with similar puzzles on their persons, Cora is unable to escape involvement in the investigation. While Cora gets assistance with the puzzle solving, she can’t help but notice something interesting about the murders. The facts of the case start to resemble the plot of the old Cary Grant movie Arsenic and Old Lace:

“Arsenic and Old Lace is a movie based on a stage play, which is set in a rooming house run by two little old ladies who have a habit of poisoning their guests. They prey on little old men, preferably widowers.”

“Exactly. Cary Grant plays the nephew, who’s about to get married— any of this starting to sound familiar?— until he suddenly finds out his sweet little old aunts have been blithely poisoning people. He confronts them with it, but they not only show no remorse, they’re proud of what they’ve done, and they describe their recipe: two parts arsenic, one part strychnine, and a pinch of cyanide.”

“And they put it in elderberry wine because they find it disguises the taste.”

Cora may not be a Sudoku or crossword puzzle solver, but she is very observant and she knows people; two things that come in handy as she helps the chief catch a killer. She manages to hide her lack of ability to solve puzzles with fast talk and witty repartee:

Sam Brogan wasn’t happy. The cranky officer was seldom happy, but being awakened at four in the morning on a night he wasn’t supposed to be on duty didn’t sit well. Sam had strung the crime scene ribbon as if it were a garrote with which he wished he could strangle someone. But having to fingerprint Cora Felton was the last straw.

“This is stupid,” he said, rolling her fingers in the ink pad.

“If you don’t like it, you shouldn’t have touched the bottle.”

“Chief Harper handed me the bottle.”

“Harper handed you the bottle?”

“Then I gotta do his fingerprints.”

“You don’t have them on file?”

“The chief hasn’t been booked that often. I try to arrest as many people as I can, but when you keep arresting your chief you get a bad reputation.”

“All right, you gotta fingerprint the chief. You gonna grouch at him?”

“No. Your fingerprints are your fault. The chief may not know any better, but you should.”

“Can I quote you on that, Sam? The chief doesn’t know any better than to contaminate crime scenes?”

“You quote me on that and I’ll deny it. It not what I said and you know it.”

Sam rolled the last finger onto the fingerprint card.

Parnell Hall’s latest installment isn’t just funny, it actually contains all of the puzzles used to solve the mystery, along with the solutions later in the book in case you want to cheat—I mean check your work.

This may be the 14th book in the series, but I must admit that it was the first one that I’ve read (although not the first I’ve read by the author). I have to say, I can’t remember the last time I felt so satisfied with the ending of a mystery. The author is able to surprise you with a whodunit, but leave you feeling that the solution was completely fair and you had every opportunity to solve it yourself….even though I didn’t.

One word of warning, though. After finishing the book you are going to want to immediately watch, or re-watch, Arsenic and Old Lace. 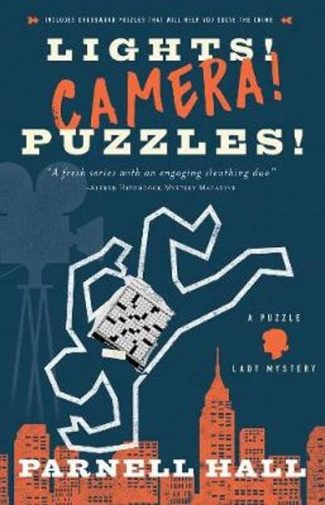 Lights! Cameras! Puzzles! by Parnell Hall is the newest novel in the ever-popular Puzzle Lady mystery series. Cora Felton signs on as an associate producer for a movie about her own life when the first dead body shows up on set . . . with a crossword puzzle. The twentieth installment in the Puzzle Lady…

A stolen puzzle. A bloody knife. A dead body. I think the Puzzle Lady could use a drink! And what better drink than this week's Pick Your Poison—where we create a cocktail inspired by a recently published mystery, thriller, or crime novel—”The Purloined Swizzle” cocktail, inspired by Parnell Hall's 19th Puzzle Lady Mystery, The Purloined… 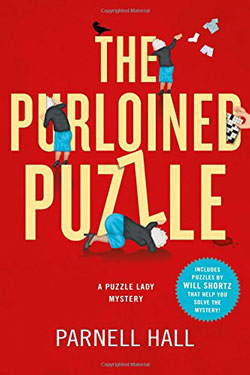 In The Purloined Puzzle by Parnell Hall, amateur sleuth and crossword impresario Cora Felton is asked to solve a puzzle, only to find that it’s been stolen―and a murder weapon has been left in its place (available March 13, 2018). Take a visual tour of The Purloined Puzzle with GIFnotes! Wow, 19 Puzzle Lady books…

Every Wednesday, we here at Criminal Element will put together a list of Staff Picks of the books that published the day before—sharing the ones that we are looking forward to reading the most! This week, David Rosenfelt returns to his Doug Brock series and Clare Mackintosh delivers another twisting psychological thriller! See what else…