Review: After the Storm by Linda Castillo 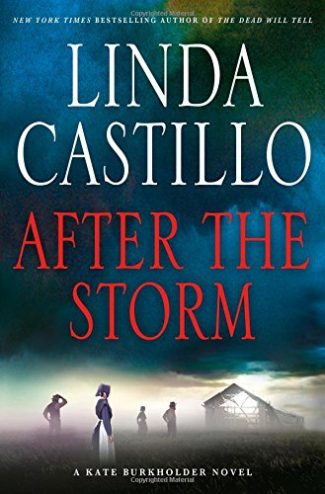 After the Storm by Linda Castillo is the seventh mystery in the Kate Burkholder series, where a tornado passes through the Chief of Police’s town, uncovering secrets left and right.

After the Storm is the seventh Kate Burkholder mystery, and I’ve been a fan of Linda Castillo since the debut, Sworn to Silence. For those who haven’t dipped into this series, Burkholder—the chief of police in the fictional town of Painter’s Mill, Ohio—was raised Amish. Her background proves both positive and negative for her. While she speaks Pennsylvania Dutch and is knowledgeable about Amish culture (something that is instrumental in solving the mystery in this novel), her abandonment of the Plain Life creates friction as the local Amish treat her with reserve, if not outright dislike. Even her brother and sister are conflicted about Kate’s choice to leave the faith.

While Tomasetti and the Amish men pour lemonade and talk about the storms forecast for later, I follow the women into the kitchen. I’d been nervous about accepting today’s invitation from my brother because I didn’t know what to expect. I had no idea how they would respond to me and Tomasetti or the fact that we’re living together with no plans to get married. To my relief, no one has mentioned any of those things, and another knot of tension loosens.

After the Storm begins with a prologue that takes place 30 years in the past, and it immediately pulls the reader into the story. Sally, a nine-year-old girl, sneaks onto an Amish farm to prove she is strong and independent, but she sees far more than she has bargained for—several men are arguing, and it turns physical:

She was about to close the hatch and make a run for home, when the shouting began. She didn’t know Pennsylvania Dutch and she couldn’t see their faces, but she didn’t need either of those things to know the they were angry. Her mom had always told her Amish people were religious and gentle, never partaking in any kind of violence. But there was nothing gentle about the conversation they were having. She almost couldn’t believe it when one of the men shoved the other one. She nearly yelped when they shuffled to within a few feet of her hiding place, boots scraping against the floor, kicking up dust. She heard the wet meat slap of a fist against flesh.

Thirty years later, a tornado (one of the storms from the title) sweeps into town and cuts a swathe of destruction, which sets several plotlines in motion. One of the hardest hit areas is a mobile-home park. Kate is first on the scene. She and lover Tomasetti hear the cry of a baby and try to rescue the child from the wreckage of the trailer. The smell of gas drives Kate into the rubble, and she carries the child out. But the baby does not survive, and Kate, the Police Department, and the town of Painter’s Mill are slapped with a wrongful death suit by the parents.

While Kate is dealing with that issue, the cleanup from the tornado damage progresses. A group of boy scouts discovers the bones of a young man in a damaged barn. The skeleton’s hands and feet are missing but a steel plate from a broken arm is found with the remains. Kate and the rest of the police department begin a search to identify the victim.

Then, Kate and Tomasetti are blindsided by a life-changing event. As they struggle to come to terms with such an enormous change, things are made more difficult by several attempts upon Kate’s life. She is lured out to a dark and isolated road, and a shooter puts several bullet holes through her windshield. Even more frightening, an armed threat menaces Kate in her own home. With the wrongful death suit and the investigation into the 30-year-old murder, it is hard for Kate to determine exactly who wants to kill her.

Although this sounds dark, Castillo leavens the story with touches of humor.

“How long has this place been closed?”

“Around eighteen years. Give or take.”

“Looks it.” He straightens, his eyes skimming the trees and thick underbrush. He’s not the uneasy type, but I sense his tension. I feel that same tension creeping into my own psyche. We’re isolated here and surrounded on all sides by perfect hiding places. If you wanted to ambush a cop, this would be the perfect place to do it.

As if realizing my train of thought, he grins. “Keep expecting to see zombies walking out of those trees.”

“If that happens, it’s every man for himself.” I lift one of the canvas bags and heft it onto my shoulder.

At its heart, After the Storm is about love and family. Birth families, new families, siblings, and babies—and all the nuances a family entails. Families do not only protect one another. Families fight. Grudges and resentments can last decades. Vulnerable children are abused. Sometimes love wins out over emotional crises. But sometimes intolerance is more powerful than love, and the hatred born of that fanaticism can result in murder. Those 30-year-old secrets, once laid bare, result in consequences that are only too easy with which to understand and sympathize. Lies and murder in the face of love make for a powerful motive.