A Fistful of Collars is the fifth in the Chet and Bernie canine mystery series by Spencer Quinn, in which the dog deservedly takes top billing (available September 11, 2012).

Private eye Bernie Little never had a better friend than Chet. Man’s best friend, to coin a phrase. Yep, Chet’s a dog—a tag-wearing, tail-wagging member of the “nation within” who live among us, smelling, tasting, and observing everything.

A dog’s a walking detective kit, if you think about it, picking up clues a human like Bernie might miss. True, Chet lacks a bit in the attention span department—he takes the idea of living in the moment to a new level—but he usually makes up for that with his judgment about people. Chet’s instincts are pretty reliable when it comes to determining who’s okay and who’s not.

“And this is Chet,” Bernie said, as they settled on a huge leather couch.

“Know all about him,” Gronk said. He held out his hand, a real big one. I went over, just to the edge of his reach. He scratched behind my ears. This Gronk dude, whoever he happened to be? A gem, in my book.

Having read Dog On It (2009), the first book in the Chet and Bernie series, I was happy to catch up with Chet and Bernie again four books on; happier still to discover that not much has changed since I last followed them on a case. Bernie’s still the smartest, strongest, best all-around guy in any room, any time (at least that’s the way Chet sees it) and Chet is still the narrator most likely to enjoy a chewy treat. They’re both ex-police (well, Chet didn’t make it all the way through K-9 training) living in a desert valley town in an unnamed western U.S. state. Now, as a P.I., Bernie takes on as much work as he can to keep himself in Hawaiian shirts and classic Porsches (he has a tendency to wreck them), and Chet’s always happy to go along for the ride—in the shotgun seat with the breeze ruffling his fur.

. . . a very comfortable shotgun seat covered in red leather, although red’s not supposed to be something I can spot, according to Bernie, so maybe it wasn’t.

This time, the job is keeping an eye on Thad Perry, a troublesome Hollywood star who’s filming a movie in the valley. It seems like a straightforward minder gig, and a lucrative one at that, until Bernie develops a suspicion that the movie star has a link to a local murder from years past. Thad seemed all right at first—Chet liked him from the moment he caught Thad scratching under his arms—but Thad’s also a cat person, and that makes him questionable.

It wouldn’t be much of a story if it all boiled down to basic dog-versus-cat antics, so we do have a few layers of intrigue to reveal. Spencer Quinn is the nom de plume of Edgar Award-winning thriller writer Peter Abrahams, who knows how to craft a plot. But the real treat is Chet the Dog as narrator, and a more faithful, eager-to-please narrator you could not hope to find. His perception is astute, funny, and wholly canine—and Chet’s need to have things explained to him more than once comes in handy for readers who (ahem) miss the occasional plot detail on the first mention.

Shake your head at the idea of a dog cozy if you will. I understand that the genre isn’t for everyone, but Chet and Bernie might make you change your mind. Clever and upbeat, they never fail to entertain. 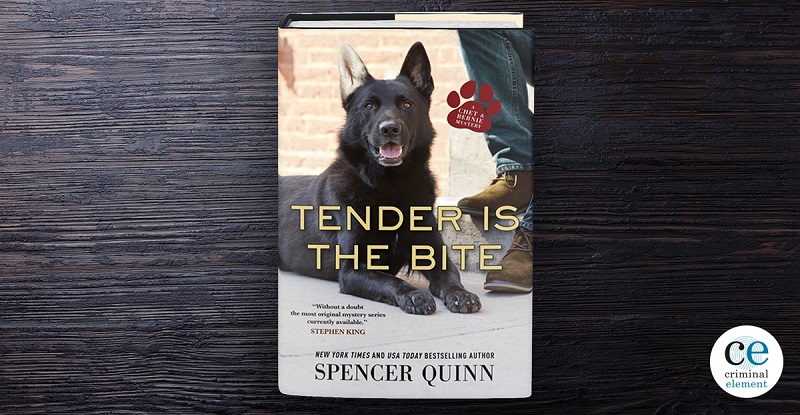 Chapter 1 The woman looked up at Bernie. Something about her face, turned up like that, made an impression on him. I can feel those impressions happening in Bernie, but what they are exactly is something I find out later or not at all. “No, it was a good joke,” she said, agreeing with me.…