Pro football season is upon us once again much to the chagrin of my wife.

“Are they always playing a game?” she will voice. With ESPN, NFL Network, and the broadcast channels, Sunday morning through Sunday night games, Monday night football, plus games on Thursdays and what not, there’s a lot of dang football to be watched. I, along with numerous fans, breathed a sigh of relief when the players and owners reached an agreement on new contract language, and except for some pre-season contests, the season was on.

But it’s not just the thrill of the quarterback escaping the pass rush or wide receivers beating double coverage that I find interesting about this bruising way skilled men make a living—on average a relatively brief living and, in far too many cases, enduring long-lasting debilitating effects thereafter. Yet, like in various walks of life, it’s the quirkiness of the individuals who are part of this multi-million dollar entertainment complex whose antics off the field fascinate and fuel the imagination.

In the late 1990s I wrote a noir novel called The Jook. Told in the first person, it was the likes of players such as Hollywood Henderson and Michael Irving, gentlemen with impulse control issues, who inspired me to come up with the character of Zelmont Raines, a Super Bowl winning wide receiver, prone to making bad choices shall we say throughout his troubled career. Zee’s back in L.A. with a new team in town (in reality, then as now, L.A. still has no pro football team). Needless to say, what with a leggy and brainy and ambitious female lawyer for the team, a religious zealot commissioner of football, a mobbed-up team owner, and his bisexual nightclub-owning buddy, there’s going to be trouble. And why shouldn’t you expect it?

There’s a tradition of hard-boiled noirish stories in prose and film and TV in which a boxer is the central character. You have a lone figure engaged in a profession where the object is to hit your opponent harder and faster. From ancient Rome to now, it’s still a ticket for a poor kid to get a leg up and out of his, or her, meager circumstances. What with shady types as managers and promoters, dazzling dames and money exchanging hands, how could that not be a hothouse from which tales of chicanery would blossom?

While football is a team effort, those volatile elements found in the world of boxing are in the arena of football, too. The owners may dress better and have more money, but human nature when you get past the fancy clothes, remains the same. In football, it’s important that each player on the field knows the playbook and his assignment, but it’s still about individual effort and being able to improvise when necessary. It takes a certain outsized mindset to be in the pros and it’s not hard to see how that outsizeness can lead to excess. It’s hard to turn the game switch off and on, and you can see why they make their way into darkness beyond the bright lights.

It’s the contradictory duality of pro athletes which remain compelling. Their awe-inspiring abilities as contrasted to their sometimes less-than-sterling after hours behavior. Brett Favre is one of the all-time passing leaders, but will forever be shadowed by the accusation he texted his . . . junk, unsolicited and unwanted, to a much younger woman. Wide receiver Plaxico Burris managed to shoot himself in the leg with his own gun in a nightclub, does two years in prison for that knucklehead stunt, and at 34 is hoping to make a comeback in the pros, with the Jets, competing against dudes more than 10 years younger than him. When interviewed recently on Real Sports on HBO, Mr. Burris said he certainly would not be having guns anywhere around him now. But in response to further questioning from Bryant Gumbel, Mr. Burris remarked something to the effect people should know…“he don’t take no shit.”

Did I mention Mr. Burris’s wife is a good-looking, brainy lawyer?

Gary Phillips’s The Jook has been reissued by the Switchblade imprint of PM Press. Also for Switchblade, he is the co-editor of the upcoming anthology Send My Love and a Molotov Cocktail! Stories of Crime, Love and Rebellion.

Read all posts by Gary Phillips for Criminal Element. 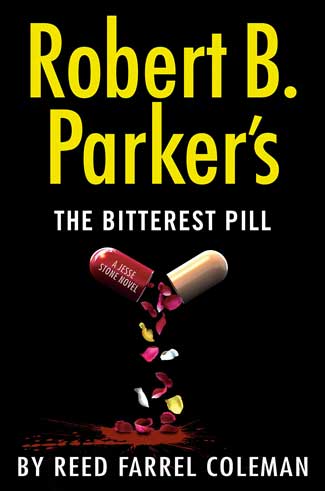 Robert B. Parker’s The Bitterest Pill by Reed Farrel Coleman is the 18th book in the Jesse Stone series, where the opioid epidemic has reached Paradise, and Police Chief Jesse Stone must rush to stop the devastation. Why are we hooked on Robert B. Parker’s Jesse Stone character? The obvious: he’s taciturn, self-deprecating, achingly honest,…