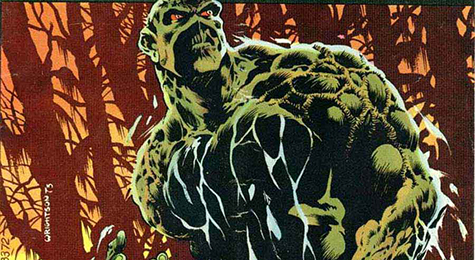 The history of comics is a catalog of creations that began as throwaway entertainment and ended up succeeding far, far beyond what their originators could have ever predicted. The pair of Cleveland boys who came up with Superman sold the rights to their character for $130. The Hulk originally only lasted for six issues before he was cancelled, then he was recycled into a comic called The Avengers that lumped together all the Marvel heroes that also weren’t selling. Wolverine first appeared as a one-off antagonist in a revived Hulk series. The list goes on and on.

The Swamp Thing is one of those negligible offspring that somehow became industries unto themselves. The character has appeared in two live-action films and two TV series; there have been action figures, t-shirts, video games, and apparently even slippers. And the comics in which he appeared in the ‘80s were among those that changed the industry. When writer Alan Moore took on the character in 1984, along with Steve Bissette and Rick Veitch handling the art, the tired formulas were thrown out the window, and stories and characters began appearing that took the series into previously unheard-of places in comics. Moore told horror stories that cut to the heart of the national character; he took his protagonist on metamorphic journeys that proposed mind-bending relationships with the natural world, and even ferried readers to the limits of human consciousness in 4-color form.

But all that came later.

Since a thousand Master’s Theses could be written about the Swamp Thing, especially his 80s incarnation, let me start at his humble beginnings and stay there. The series began in 1972 and was written by Len Wein and drawn by a promising young artist named Bernie Wrightson; Wrightson’s art, which owed quite a bit to the EC horror comics of the 50s, but had a grace and smoothness all its own, was so impressive that when he asked for extra time to complete his drawings, DC obliged and made the series bi-monthly. Wrightson would draw the series for a mere ten issues before Black Orchid artist Nestor Redondo took over; Wein would write the first 13 issues. Wein never even bothered to come up with a name for the character; when asked what he was working on, he’d say, “I’m writing this swamp thing for DC,” and the handle stuck. Originally, Wein and Wrightson wanted to take their shambling plant-man hybrid on a tour of horror conventions, so those first ten issues were planned thus: a Frankenstein’s monster story, a werewolf story, a witch story, an insane robot story, an alien story, an H. P. Lovecraft-style “mad god” story, and so forth. It was an unambitious start to everything that would follow, but it did give Wrightson an excellent showcase for his style.

So the question becomes, how did a character with such forgettable, derivative origins make an impression at all—much less, how did he last beyond 1972? That same year produced some enduring comics characters—Luke Cake, Jonah Hex, Etrigan the Demon—but it also produced Shanna the She-Devil, Nebula Man, and a comic actually titled The Sinister House of Secret Love.

Not every character originating in the ‘70s made it to a Disney film, a Netflix series, or a cameo on a CW show. A lot of comic fodder never even made it to the ‘80s. But Swamp Thing did. For all the flaws in the ongoing saga of Alec Holland, bathed in strange chemicals and reborn as an unstoppable flower bed, the character and his original series hit comic readers right in the solar plexus fanboyus.

More than anything, it was Wrightson’s artwork that made the protagonist unforgettable and locked the character into the pantheon that included DC’s other weird heroes of the late ‘60s and early ‘70s—characters who collectively were becoming a genre of their own. Wrightson’s characters had a graceful motion on the page, and moved through a landscape of expressive shadows.

And while Wein did a fine job on the stories, it’s really an effect produced by the art that kept the series from Sinister-House-of-Secret-Love oblivion. Almost every issue that Wrightson drew has a moment in which a terrifying face emerges from the atmospheric darkness, and this nightmare moment is usually so effective that it seems like the key aspect of the series, the line connecting all the issues.

There’s the moment in Issue #3 where the Patchwork Man, assembled from random body parts by his brother Arcane, sees his misshapen reflection for the first time. There’s a similar moment in Issue #4 where a man transforms into a werewolf in front of terrified bystanders. In Issue #6, titled “A Clockwork Horror,” Swamp Thing comes across a remote Swiss or Bavarian town where no one is surprised by his appearance—in fact, everyone is extremely polite. The town’s mayor reveals that he is the creator of mechanical people, all of whom are programmed to be the nicest folks you ever did see.

When an old enemy of Swampy’s arrives and the mayor is killed, Wrightson uses a couple of panels to show a terrifying transition, a wrinkle on the face-emerging-from-the-darkness template; the nice robotic townspeople eye their mayor’s assassins with murder in their expressions. Then they move in. Wrightson’s remaining panels show the robots and their victims as they are all mutually obliterated. Wrightson’s swan song would have one of the greatest of the chilling-face-in-the-dark moments, when Swamp Thing comes across a graveyard inhabited by the misshapen Un-Men he encountered in Issue #2 (inspired by the freaks of Tod Browning’s film). The beaten, misshapen face of the big man in charge makes the introductions, and it is none other than Arcane, who himself was remade in hasty fashion by his own deformed creations. Arcane’s scary-as-hell new face was a high point for comic book horror, and was somehow made even more terrifying by artist Steve Bissette in Swamp Thing’s ‘80s series.

What happens next in Issue #10 almost doesn’t matter. We’ve wandered our way through the darkness and we’ve seen that face. THAT is the point of the story, once again.

When Wrightson left the original series and Redondo took over, the series gained a talented artist—especially of women (Redondo’s females were much more striking than Wrightson’s)—but it lost those shadows, that creeping motion, and those visages gazing out from a night as black as sleep.

As the series kept losing steam, new writers decided to move away from the horror elements and make Swamp Thing more of a typical superhero, a move akin to asking Hitchcock to direct a Steven Segal movie. The '70s series concluded on some of the lowest notes imaginable, making the revival a decade later that much more remarkable.

And those '80s comics are probably the most essential graphic stories of their time, Watchmen and Dark Knight be damned. But this column is sticking with the ‘70s, and so we shall next take a look at a memorable creation who perhaps never reached her full potential. Though, like the first ten Swamp Thing issues, she definitely left an astounding visual impression.

Her name was Madame Xanadu, and she’s the next stop on our eerie odyssey.

Check back next week as we highlight another DC superweirdo—Madame Xanadu!