The theater world has long been a prime setting for mystery and mayhem. Shakespeare, that homicidal scribe, virtually carpeted the stage with slain corpses. The murderers he created are numerous: Richard III, Othello, Titus Andronicus, Lear’s daughter Goneril, Macbeth (both He and She) and a whole squad of Caesar-skewering assassins—whose best-known member, Brutus, made this bloody recommendation:

Let's kill him boldly, but not wrathfully;

Let's carve him as a dish fit for the gods…

Oooo-kay, we’ll take that under advisement.

Not to say that Ol’ Will was the first playwright to put his hand to manslaughter. The Greeks were Agamemnon-izing their characters way back in the BC. Murder-most-foul has always found its way into the spotlight (or whatever Sophocles used to illuminate a scene.) So when the murder mystery novel came into being, it was only natural that the theater and its actors should crop up within those pages. The following list is not meant to be comprehensive, chronological or anything else multi-syllabic. With the understanding that theater-themed whodunits are really too numerous to mention, I’ll now proceed to mention some… 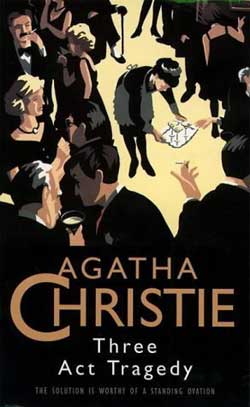 Since Agatha Christie has always been my go-to gal of the genre, let’s start with her Three Act Tragedy. This 1934 novel (called Murder in Three Acts in the U.S.) kicks off with Hercule Poirot’s attendance at a (fatal) dinner given by a famous stage actor. As the title implies, it uses the structure of a three-act play, each act with its own murder. Spoiler: Poirot solves ‘em all. Dame Agatha liked to pepper her writing with theatrical quotes and particularly favored the aforementioned Mr. S. Her novels Sad Cypress, By the Pricking of My Thumbs, and Taken at the Flood all derive their titles from Shakespeare lines. The Mousetrap—which she named after a Hamlet reference—became the world’s longest running play, and is still going strong in London after 62 uninterrupted years (!) Another early example of theater mysteries—this time a quartet of novels—is Ellery Queen’s Drury Lane series. Originally published under the byline “Barnaby Ross”, these whodunits feature a retired classical actor who makes his home in a medieval castle transplanted in New York. Having given up performing due to a hearing loss, Drury Lane (named for the site of London’s famous Theatre Royal) puts his hand to solving the occasional dastardly killing.

Charles Paris is another actor/detective with his own series of novels. The creation of Simon Brett, Paris is a likable, alcoholic thespian, perhaps past his prime as an actor—but not as an amateur sleuth. The series is still ongoing, numbering nineteen titles over three decades. The latest entry, just out this past fall, is The Cinderella Killer, in which Paris himself is a suspect in a series of yuletide killings. Then there’s Gwendoline Butler’s Inspector John Coffin series, which numbered nearly three dozen books (from 1956 to 2002.). Here, the inspector’s wife, Stella Pinero, is a London star of stage and screen whose work often ties into the mystery du jour. It should be noted that not all theatrical detectives are actors. The protagonist of Edward Marston’s Elizabethan Theatre series is Nicholas Bracewell, a 16th century stage manager. Apparently, if you can coral the runamuck egos of actors, you can coral the clues to a murder.

Predating all these stage sleuths, we have the meticulous Mrs. Dorcas Dene. Though now pretty much forgotten, she was quite popular in the late 19th century when she plied her trade. Her fictitious case-solving started with Dorcas Dene, Detective: Her Life and Adventures, a collection of short stories published in 1897, followed the next year by a second volume. As created by her author, George R. Sims, Dorcas had been a working actress (of, alas, only lackluster roles) before turning her skills to professional deduction. Breaking from the norm of Victorian female characterization, she always employed sound analysis in her work, never intuition or wacky, wild guesses. Dorcas’s expertise was appreciated by the professionals at Scotland Yard where she was very much considered an equal—or superior—in the case-cracking department. Author Sims clearly valued theater life, and his mystery output was far surpassed by his playwriting—he penned more than thirty stage scripts. In a similar vein, there’s New Zealand author Ngaio Marsh (pronounced Nigh-oh), For Marsh, mystery writing was only one half of her creative life; her other, perhaps main, love was the theater. Through her scripting, producing, and general support, Marsh showed an ongoing devotion to the stage arts. Her gentleman deducer, Inspector Roderick Alleyn, starred in all her mystery novels, many of them with theatrical themes. Some, like Death at the Dolphin and Light Thickens dealt directly with Shakespearean entertainments, dire daggers a-flying.

In the Mr. and Mrs. North mysteries—written, appropriately, by the husband-wife team of  Frances & Richard Lockridge—the Manhattan theater scene pops up time and time again. It was perhaps natural that a couple as urbane and well-connected as the Norths would rub shoulders with the Broadway elite. Death on the Aisle, Death Takes a Bow, and Death Of an Angel all deal with footlight fiendishness. By the way, it was the Mrs. half of the deductive duo who usually broke the case. Mr. North seemed generally content to just quaff cocktails and spout bon mots.

I’ll take my exit with a nod to that most ionic of all clue-chasers: Sherlock Holmes. In the much-anthologized story, “A Scandal in Bohemia,” he encounters Irene Adler, a onetime denizen of the stage—in this case, the opera. In the tale, Adler, a former prima donna, acquits herself so impressively—and, through her acting chops, fools Holmes so dazzlingly—that the female-phobic sleuth henceforth refers to her, reverentially, as “The Woman.” Ah, never was Sherlock so thoroughly upstaged.

Read all of Michael Nethercott's posts for Criminal Element.