Guns, knives, strangulation—it’s all so “been there, done that.” Readers are bored with shotgun blasts, lukewarm about machetes, blasé about blows to the base of the skull. They want blood and guts with a sick twist, a cozy corpse with a cerebral dose of toxin, or remains that got that way in some inexplicable manner. They want something new, unusual, outlandish about the weapons and methods writers use to commit their fictional crimes.

Writers are more than willing to oblige and have been since almost the inception of the mystery and crime genres. Think Arthur Conan Doyle’s Indian Swamp Adder in The Speckled Band. The effort to satisfy the reader’s taste for unusual demise continues today. Here is a look at some of the more bizarre weapons and methods writers have used:

Umberto Eco, The Name of the Rose

A monk poisons the pages of Aristotle’s Poetics, resulting in anyone who licks their fingers to turn the page being poisoned.

The victim is murdered with a library card catalog rod. This is one of several works that has used a card catalog rod as a murder weapon. With the advent of computers and the demise of card catalogs, I am happy to report that instances of death in this manner have dropped precipitously.

Not truly a mystery or crime story, I nonetheless wanted to include this. A captive author resolves his differences with his stalker fan/captor by judicious application of a manual typewriter.

Victims are bludgeoned with autographed copies of The Godfather and Crime and Punishment.

The murderer rigs the brake on a library ladder to cause the victim to fall from a window.

A bullet made of ice melts after the killing. The first instance of the popular use of water in its solid form to prevent discovery of the killer but by no means the last. See below.

Christopher Brookmyre, A Big Boy Did It and Ran Away

Death by a mercury-infused icicle.

Mark Cross, The Jaws of Darkness

An arrow made of ice is shot into the victim’s brain.

An icicle through the heart.

Animal Farm (Some animals are more deadly than others)

Environmental activist/victim is done in by an exploding cow.

The murder weapon is a 31-foot long anaconda.

Not to be outsnaked, Burdett uses an entire car full of pythons and cobras to kill the victim.

You guessed it, murder by bees.

Yes, that’s me, and a bull shark is the murder weapon in my latest novel set in the British Virgin Islands.

The murderer puts poison on birds’ beaks and trains them to peck at the victim.

A woman is killed by having her body gilded with gold paint, effectively smothering her.

The deceased is done in by an exploding Christmas tree.

At a curling match, the victim is killed by an electric heater cord, hidden under the snow, contacting the metal chair on which she is seated.

Ringing in at the longest title on this list, Sayers also takes the prize for the most far-fetched murder: a death caused by the pealing of church bells.

Dorsey goes on a weird weapons spree in this, his first novel, including death by ingestion of Fix-a-Flat, death by rum enema, and death by designer jeans. How do you kill someone with designer jeans? Put them on the unconscious victim, soak him in a tub of water, and he is squeezed to death as they shrink, of course.

Now, why didn’t I think of that?

John Keyse-Walker practiced law for 30 years, representing business and individual clients, educational institutions, and government entities. He is an avid salt- and freshwater angler, a tennis player, kayaker, and an accomplished cook. He lives in Ohio with his wife. His first novel, Sun, Sand, Murder, was the winner of the 2015 Minotaur Books/Mystery Writers of America First Crime Novel Award.

Trick or Treating with Minotaur Books

Which Unusual Murder Weapon Would You Use? 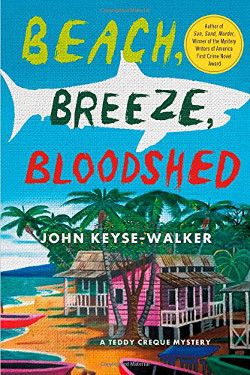