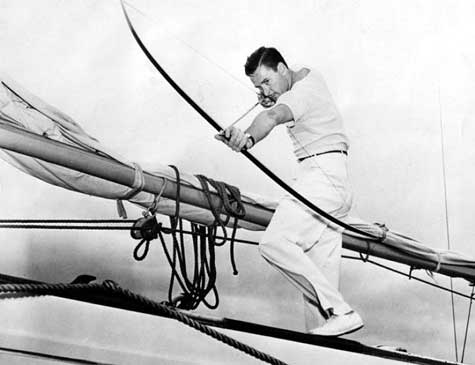 Errol Flynn (1909-1959), a larger than life movie star whose legendary off-screen antics (the My Wicked, Wicked Ways autobiography is an eye-popping corker) rivaled any images stamped on celluloid, was an overnight success story when Warner Bros. took a chance on the unknown Australian actor and cast him in 1935’s Captain Blood. And just like that, the swashbuckling film legend, who to this day has no equal, was born. Flynn would reach the apex of that costumed, tight-wearing genre in 1938’s Adventures of Robin Hood for which he is still best remembered. But The Tasmanian Devil also looked at ease strapping on six-shooters, riding a horse, and romancing beautiful belles on the frontier, though he believed otherwise. In Wicked, Flynn stated, “I felt I was miscast in Westerns, but this was impossible to point out to producers when the pictures were so highly successful.” Here are three examples of why Flynn stands corrected: Amazing what Mel Brooks can do to a beloved classic. I remember initially watching Dodge City, long before seeing Blazing Saddles, and took the plot as dead-on serious. Brooks partly based his celebrated 1974 parody on Dodge City, and the next time I saw the source of his inspiration I couldn’t help but laughing. Especially the over the top saloon brawl that throws in everything but the kitchen sink. Still, Dodge City—directed by Michael Curtiz (Casablanca, Mildred Pierce)—remains a milestone must-watch. The film finds the angelic Olivia de Havilland steering a wagon full of children through the center of Dodge when a gunfight erupts around them, and when one of the young boys courageously tries to slow down the runaway team of horses, he is killed. Flynn plays Wade Hatton who carries the lifeless little body back to his weeping mother and sighs, “Children … this has got to stop.” Hatton’s eyes comes to rest on the boy’s chest where the brave lad had a homemade sheriff’s badge pinned to his shirt. Soon after, Hatton accepts the position as sheriff of Dodge and the newspaper rags herald: Dodge City Will Be Cleaned Up! And Flynn does just that with the help of old Hollywood staple Alan Hale. And Flynn even finds time to romance Olivia along the way. Great fun!

Trivia: According to TCM, de Havilland wanted the part of the dancing saloon girl that went to co-star Ann Sheridan. This film offers, in Hollywood alternate history fashion, some odd yet absorbing discourse on the politics involving abolitionist John Brown’s (Raymond Massey) frequent attacks leading up to the Civil War, all while the competition heats up between James “Jeb” Stuart (Flynn) and George Armstrong Custer (Ronald Reagan) who are vying for the hand of Kit Carson Holliday (Olivia de Havilland). Both Stuart and Custer, along with several West Point graduates from the class of 1854, are stationed at Ft. Leavenworth, Kansas, “where the railroad and civilization ended, the Sante Fe Trail began.” Carl Radar (Van Heflin) is a disgraced cadet who sides with Brown and has a personal beef with Stuart. It’s interesting to get a glimpse of the future Prez Reagan in early acting roles and he stands up well next to Hollywood’s heavy hitters.

Favorite line is delivered by Massey’s John Brown: “I have given you fair warning. You can keep your heads or lose 'em as you wish.”

Note: A recent DVD cover gives Reagan top billing with his mug front and center. Somewhere, Flynn and Ronnie must be having a good laugh over the fickle tides of fame. Flynn switches sides and plays a Yankee Captain named Michael J. McComb during the Civil War and finds himself guarding the Union payroll when it comes under attack from a band of Confederate Forces. Instead of allowing the rebels to capture the money he burns it and then comes under ridicule when the Yanks win the battle. Though he’s banished from the military, he doesn’t look at it as a slight and goes into the gambling business where he begins operating by his own rules. Ann Sheridan plays a tough, business-minded woman who conflicts with McComb at first until they agree to an unlikely alliance and eventually fall for each other. The film, based on the novel by Stephen Longstreet, suited Flynn’s rebellious image of the time—“I’m interested only in the needs of one Michael J. McComb— and is a sleeper flick well worth visiting.

Trivia: Director Raoul Walsh (who’d made a number of successful films with Flynn), at the urging of studio head Jack Warner, attempted to keep Flynn on a short leash during filming. I bet you can guess how successful that endeavor turned out to be and the two never worked together again after Silver River.

Flynn also donned a cowboy hat in Virginia City (1940), They Died with Their Boots On (1941), San Antonio (1945), Montana (1950) and Rocky Mountain (1950). His pirate films and off-screen lifestyle will undoubtedly always get chief mention in any account of his life, but somewhere in that top ten list of accomplishments it must be recognized that he made some damn fine Westerns.