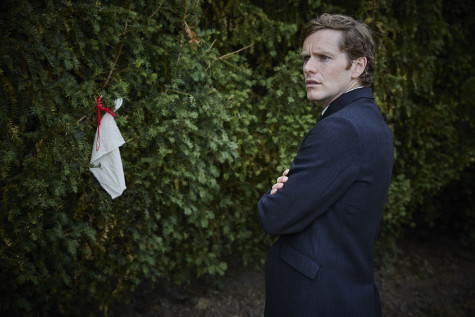 Bach’s “Mass in B Minor” wafts through our speakers as the montage begins. A blond woman; a hedge maze; a dark-haired woman pushing a baby carriage; an au pair who seems suspiciously attentive to the father of her charges; a woman in a hospital bed connected to life-support; a scientist in a lab; a tent in the woods; Spanish lessons; dead animals; more dead animals; and Endeavour Morse (Shaun Evans) in a dreary flat, with a view of a brick wall and Bach on the turntable.

It’s June 5, 1967, day one of what would become known as the Six-Day War in the Middle East. It also happens to be the fourth anniversary of a crime in which a young woman was beaten and left for dead. That unsolved case continues to plague D.I. Fred Thursday (Roger Allam). So, when the au pair, a Danish girl named Ingrid Hjort, is reported missing and her last whereabouts were near where the earlier attack occurred, Thursday naturally sees a link.

That’s just one of many dots that will have to be connected in this hunt for a killer. The hedge maze at the start is an appropriate image. “Prey” takes some sharp turns and tantalizing detours en route to the heart of the mystery.

Back on the job, Morse almost looks as if he’s reached equilibrium, but we know that’s an illusion. Mere minutes into the episode, we learn what’s upended his world this time. With D.S. Jakes gone to America, D.C. Morse should have been in line for his job. Instead, the promotion went to Jim Strange (Sean Rigby), who now outranks Morse—and, as Inspector Morse fans know, will continue to outrank him throughout their careers. (In Inspector Morse, Chief Superintendent Strange was memorably portrayed by James Grout.)

Strange is a great character—jolly, but with a sneaky side that he doesn’t hide terribly well. You can’t love him, but you can’t quite hate him either. The mutual respect/tolerance that Morse and Strange show toward each other makes an interesting dynamic. And, now we see where it all began—with a cordial detente as they accustom themselves to their new positions in the organizational hierarchy.

Never the cerebral one, Strange is doing more of the thinking. Never the administrative one, Morse is doing more of the answering of the phone. One call is a report of a missing young man; another involves a missing birdwatcher. All sorts of people are disappearing. They don’t seem to have much in common. Still…we just know that all those threads—or in this case, strands of red yarn—will tie up in the end. And, this time, the finish is wild.

It’s worth mentioning the choice moments with a substitute pathologist, who’s only around long enough to examine a dismembered arm, misdiagnose the cause of the injury, and dis our beloved Dr. Max DeBryn. He’s played by Hugh Simon, who you know better as Malcolm from MI5. (Nice to see you, Malcolm!)

As always, though, it’s the Easter eggs, the callbacks, and the allusions that make you watch Endeavour with one finger on the rewind button. This episode bounces like an atom through the Morse-Lewis canon. We’ve already noted the evolving Morse-Strange relationship. Then there’s this:

The estate with the hedge maze is Crevecoeur Hall (the 17th century estate Rousham Hall in real life). It’s the ancestral home of the Mortmaigne family, whom you might recall from “The Dead of Winter” in series 3 of Inspector Lewis. That one’s memorable because it illuminates some of Sergeant Hathaway’s shrouded past—and we’re always happy when something related to Hathaway (Laurence Fox) is illuminated. Now, here we are at Crevecoeur Hall again. Or should I say for the first time? (Honestly, if we do much more time-hopping, we’re gonna need a Tardis.) At any rate, that young groundskeeper played by Rob Callender  (Game of Thrones) looks mighty familiar. What was his name again?

Go ahead: hit rewind to find out.