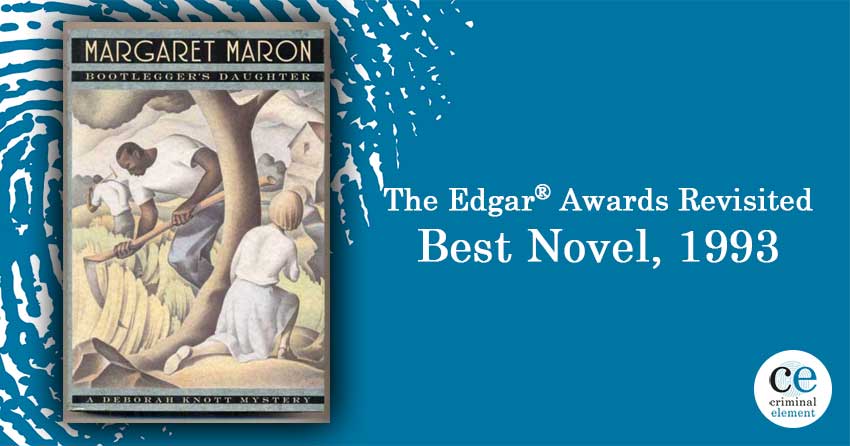 Over nearly a decade as a bookseller at Barnes & Noble, I came to know the big names in every genre. Even if I’d never read one of their books myself, I could recommend them to customers based on the author’s reputation and the reader’s interests.

Margaret Maron was one of those big names. I knew her mysteries were set in the South. That she had strong heroines. That her prose was award-winning and not too gory. She’d go down well with book clubs, older women, fans of Patricia Cornwell and Sue Grafton.

But until this week I’d never picked her up myself.

Which is a shame, because if I’d known just how great she was, I would have been much more aggressive and enthusiastic in selling her books.

Bootlegger’s Daughter introduces Deborah Knott, a North Carolina defense attorney who decides—after witnessing a blatantly racist verdict from a judge that unfairly punished a working-class black plumber—to throw her hat into the next election for judge.

But this isn’t a political thriller; or, at least, not completely. Because no sooner has Deborah begun campaigning when Gayle Whitehead, an eighteen-year-old she once babysat for, comes to her begging for help.

Gayle’s famous in town because, when she was a mere three months old, she and her beautiful mother Janie disappeared for three days. When they were finally found in an old abandoned mill by the creek, Gayle was dehydrated but okay.

Janie, however, had been shot in the head.

For eighteen years her mother’s murderer has walked free, and this nags at Gayle. With college looming on her horizon, the girl desperately wants answers. Could her father have actually hired a hitman to kill his gorgeous, sweet wife? Did her mother do something to trigger the event? As Gayle puts it herself: “What was her tragic flaw, Deborah?” At this point, the teen wants to know why even more than who:

“I’ve got Grampa Poole’s trust fun, and I’ll spend every last cent if that’s what it takes to find out what she was really like that somebody felt she needed killing.”

Now Deborah’s got two huge issues on her plate: win the election and solve Janie Whitehead’s murder. With the first, she’ll have to overcome her infamous father’s criminal record as a wildly successful moonshine bootlegger. With the second, she’ll have to crack a case that’s been cold for nearly two decades, succeeding where two separate investigations have already failed.

Luckily, Deborah’s background makes her an exceedingly sharp investigator. Thanks to her experience in the courtroom, she knows how to ask pointed questions and observe people closely. Born and raised in Colleton County, she knows every family, every reputation, every dirty little secret that filters through the local grapevine. Thanks to her criminal father, she knows better than most that people can live two lives. And as a defense attorney, she knows there are always shades of grey…

It’s not surprising Bootlegger’s Daughter won the 1993 Edgar. Deborah is a likable, smart, and upright heroine. Throughout the text, she comments on The Big Issues of racism, sexism, homophobia, gay rights, religion, family, morality.

“…Punishment’s supposed to deter a person from doing it again, not crush his spirit. And it shouldn’t depend on what color his skin is, what sex he happens to be, or what social class he’s from.

“White-collar embezzlers should get at least as much time as a blue-collar worker who steals a TV; if a mayor’s daughter gets to do community service for a hit and run, so should the mayor’s cook’s son. The Perry Byrds can be bigots, snobs, and toadies in their personal lives, but when they put on that black robe and sit on that high seat, they should be like priests administering law like a sacrament of Justice. For all the people. It’ll never be an exact science, but it doesn’t have to be a crap shoot either.”

Maron has a strong, assured voice: her prose is never too flowery, but it’s still full of sharp color. There’s an authentic sense of place that could only come from a native; Maron paints such an evocative picture of North Carolina’s landscape that you can hear the insects droning and smell the tobacco growing.

Perhaps Daughter’s greatest strength is its cast, filled with complex characters so real you expect to see them on the street, bound together by family ties—some that strangle, others that sustain. Maron gives this novel weight and substance through Deborah’s connections: her many relatives, old friends, and lifelong neighbors. Deborah knows everyone so intimately that we feel we do, too, making the mystery all that more compelling as it unfolds.

And when everything is finally laid out, the result is deeply satisfying and pretty surprising. Which is the hallmark of a great mystery, yeah? All the pieces fit snugly together, the completed picture makes perfect sense, but it’s not at all what you predicted.

Sure, Bootlegger’s Daughter doesn’t blaze a path into daring new territory. It’s not a turning point signaling a bold, fresh shift in fiction. But you don’t have to reinvent the wheel to be worthy of accolades. Maron delivered an extremely well-made whodunit that was fun to read, and too often I think awards committees forget that media should be enjoyable. It’s always nice when something this accessible and entertaining goes home with the big statue.

Next week, tune in as we take a look at The Sculptress by Minette Walters.  See you then!

Check Out 1992’s Winner: A Dance at the Slaughterhouse by Lawrence Block!