This international thriller from the New York Times bestselling author of The Bourne Legacy follows the pulse-pounding quest of Braverman “Bravo” Shaw, as he uncovers his family's secret ties to an ancient order protecting a lost Testament that could shake Christianity to its foundations. Now available for $2.99 until 11/7!

For centuries, a secret splinter sect of the Franciscans, the Gnostic Observatines, has guarded secrets that could transform the world.

Now the safety of those secrets depends on one man—and a woman he barely knows.

Braverman “Bravo” Shaw always knew his father had secrets. But not until Dexter Shaw dies mysteriously does Bravo discover the enormity of his father's hidden life as a high-ranking member of the Order of Gnostic Observatines. For more than eight hundred years, the Order has preserved an ancient cache of documents that could shake Christianity to its foundations.

Another secret society, the Knights of St. Clement, will stop at nothing to obtain the treasure, and now Bravo must follow his father's esoteric clues to find the hidden documents before the Knights. Bravo is now a target and a pawn in an ongoing war far larger and more deadly than any he could have imagined.

His companion in this quest is Jenny Logan, a Guardian assigned to Bravo by the Order. But Bravo soon learns that he can trust no one where the Testament is concerned, perhaps not even Jenny. . . .

From New York City to Washington, D.C., to Paris, to Venice, and beyond, the race is on for the quintessential prize . . . the Testament. 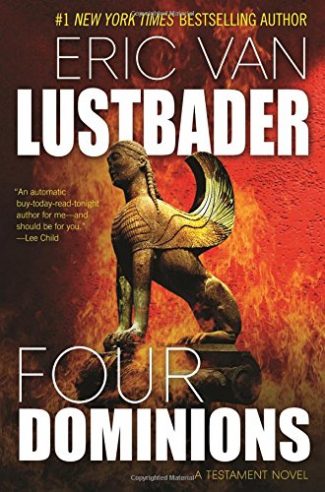 Four Dominions by Eric Van Lustbader is an action-packed, globe-spanning new entry in the Testament series that explores religion, politics, and civilization. With Four Dominions, veteran author Eric Van Lustbader gives eager readers another installment in his supernatural Testament series. Braverman “Bravo” Shaw is the head of the Gnostic Observatines, a secret Catholic society dating to…

Four Dominions by Eric Van Lustbader is an action-packed, globe-spanning new entry in the Testament series that explores religion, politics, and civilization. The End of Days has been predicted for the last two thousand years, but now it is upon us. Emma and Bravo Shaw have rescued the Testament of Lucifer from nefarious hands, but despite…

Every Wednesday, we here at Criminal Element will put together a list of Staff Picks of the books that published the day before—sharing the ones that we are looking forward to reading the most! A lost James Bond-inspired novel from Donald Westlake and a new James Bourne thriller by Eric Van Lustbader highlight a great… Jason Bourne is one of the most popular and compelling characters in contemporary fiction. Originally created by bestselling author Robert Ludlum, the Jason Bourne series was later adapted into films that have become modern classics. Now, New York Times-bestselling writer Eric Van Lustbader carries on Jason Bourne's story with a new novel about the rogue…