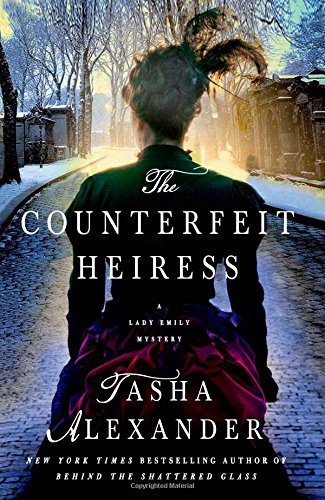 The Counterfeit Heiress by Tasha Alexander is the ninth book in the Lady Emily Mystery series.

Get a digital copy of Tasha Alexander’s The Counterfeit Heiress for only $2.99 through the month of July!

Paris: the city of romance, where Lady Emily struggles to unmask a murderer amid a case of assumed identities and shadowy figures.

After an odd encounter at a grand masquerade ball, Lady Emily becomes embroiled in the murder investigation of one of the guests, a sometimes actress trying to pass herself off as the mysterious heiress and world traveler Estella Lamar. Each small discovery, however, leads to more questions.

Was the intended victim Miss Lamar or the imposter?

And who would want either of them dead?

As Emily and her husband try to make sense of all this, a larger puzzle begins to emerge: no one has actually seen Estella Lamar in years since her only contact has been through letters and the occasional blurry news photograph. Is she even alive?

Emily’s investigation of this double mystery takes her from London to Paris where, along with their friend Cecile, she must scour the darkest corners of the city in search of the truth.

Book Review: In the Shadow of Vesuvius by Tasha Alexander

1902, Italy. Our heroine, Lady Emily Hargreaves, is visiting the ruins of Pompeii in the company of her husband, Colin, and her dear friend, Ivy Brandon, when Ivy notes that one of the plaster casts of corpses felled in the ancient eruption sports surprisingly modern sideburns. Colin, being no stranger to investigating acts of foul…