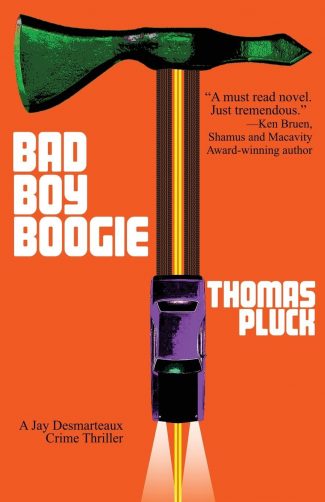 Get a digital copy of Bad Boy Boogie for only $2.99 through the month of August!

When Jay Desmarteaux steps out of from prison after serving 25 years for murdering a vicious school bully, he tries to follow his convict mentor’s advice: the best revenge is living well.

But questions gnaw at his gut: Where have his folks disappeared to? Why do old friends want him gone? And who wants him dead?

Teaming with his high school sweetheart turned legal Valkyrie, a hulking body shop bodybuilder, and a razor-wielding gentleman’s clubhouse mother, Jay will unravel a tangle of deception all the way back to the bayous where he was born. With an iron-fisted police chief on his tail and a ruthless mob captain at his throat, he’ll need his wits, his fists, and his father’s trusty Vietnam war hatchet to hack his way through a toxic jungle of New Jersey corruption that makes the gator-filled swamps of home feel like the shallow end of the kiddie pool.

Read an excerpt from Bad Boy Boogie, then check out Neliza Drew’s review!