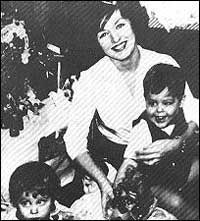 Forty-seven years ago, Alice Crimmins was front page news. Her story was my first exposure to true crime. Between 1965 and 1977, Alice Crimmins was twice tried for the murders of her children, five-year-old Eddie Jr. and four-year-old Missy. On July 14, 1965 the children went missing from their first-floor apartment in the Kew Gardens neighborhood of New York City; Alice accused her estranged husband Eddie of taking them. He denied doing so and called the police to report the children missing. Detective Gerard H. Piering was put in charge of the case, which proved unfortunate for Alice. He was a devout Catholic, father of six children, and disliked Alice on sight. When the police officers arrived at her apartment, they were surprised by the way Alice looked; she was in tight-fitting pants, white high heels, teased red hair, and wearing lots of makeup. The makeup was an effort to cover the scars of adolescent acne, but the police saw it as the actions of a cold-hearted murderess. Piering apparently said to his partner, “You interview the guy. I’ll take the bitch.” Detective Piering did not take notes or photograph the crime scene, failing to follow long established guidelines for suspected homicides. There was not a shred of evidence to support a case against Crimmins, but the police believed her guilty.

On the day the children went missing, word came in that Missy was found strangled in a vacant lot. The detectives took Alice to the scene without alerting her to what she would see; they wanted to study her reaction. She fainted when she saw the strangled Missy but did not cry on the ride back home, at least not until the cameras started snapping pictures and her silent shock turned into hysterics. Several days later Eddie Jr.’s badly decomposed body was found.

Described in the press as a “sexpot” or a “sexy redhead,” 28-year-old Alice Crimmins was out clubbing and hooking up just days after her children were found. The police found these actions suspicious, but one might argue that her grief drove Alice Crimmins out of the home where she had lived with her children. The police followed and harassed Crimmins, and even though she looked for work under the name Alice Burke, her notoriety followed her causing her to lose several jobs. Alice’s phones were tapped, which she soon figured out. She took to picking up the phone and saying “Hi boys, drop dead.” Eighteen months after the murders, an anonymous tipster wrote to the DA saying that at 2 a.m. on July 14, the night of the murder, a small woman and an unidentified male were seen carrying a wrapped bundle and small child into a car. The police were able to identify the tipster as Sophie Earomirski who identified the woman she saw as Alice Crimmins. On September 11, 1967, Alice Crimmins was arrested for the murder of Missy. She became the “Sexpot on Trial,” and her affairs were mentioned during the trial apparently as evidence to support a murder charge. At the description of Missy’s corpse, Alice Crimmins sobbed uncontrollably. Hearing Earomirski’s testimony, Alice yelled out, “You liar; you liar; you liar.”

In one of the most highly publicized trials of its time Alice Crimmins was convicted of manslaughter. Crimmins fell into a faint and was hospitalized for two weeks. She spent 24 days in jail before her new lawyers had her conviction overturned. However, six years after the death of her two children, she was on trial again in March of 1971. This time she was convicted of first degree murder for her son and manslaughter for her daughter. In 1973 her convictions were overturned due to tainted statements by the prosecutor. The DA appealed the rulings and Alice was sent back to jail for manslaughter. While in jail, she married Anthony Grace, the man once believed to be her accomplice. In November 1977, amidst much controversy, Alice Crimmins was paroled.

The Real Arsenic and Old Lace

Alice Crimmins was never presumed innocent. She had been found guilty by the press and public long before she ever went to trial, and many observers believed that she was on trial for her sexual exploits rather than the murders. There was never any evidence to tie her to the crimes and no other suspect was considered. The detective work was shoddy, the police prejudiced, and the witnesses unreliable.

Did Alice Crimmins get away with murder? I’ve always believed she was innocent. What do you think?