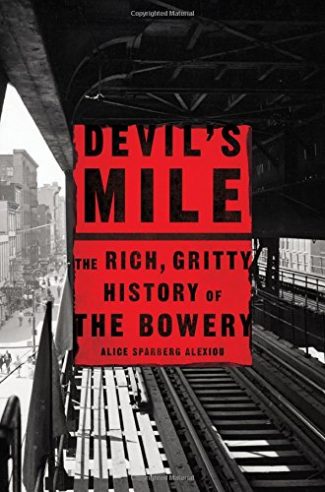 In Devil’s Mile, Alice Sparberg Alexiou tells the story of The Bowery in stunning detail, from its origins to its pre-Civil War years to its deterioration beginning in the postbellum years, ending her historical exploration of this famed street in the present, bearing witness as the old Bowery buildings and the memories associated with them are disappearing.

The Bowery was a synonym for despair throughout most of the 20th century. The very name evoked visuals of drunken bums passed out on the sidewalk, and New Yorkers nicknamed it “Satan’s Highway,” “The Mile of Hell,” and “The Street of Forgotten Men.” For years the little businesses along the Bowery―stationers, dry goods sellers, jewelers, hatters―periodically asked the city to change the street’s name. To have a Bowery address, they claimed, was hurting them; people did not want to venture there.

But when New York exploded into real estate frenzy in the 1990s, developers discovered the Bowery. They rushed in and began tearing down. Today, Whole Foods, hipster night spots, and expensive lofts have replaced the old flophouses and dive bars, and the bad old Bowery no longer exists.

THE MOB TAKES THE STAGE

On the evening of May 10, 150 policemen stood guard outside the Astor Theatre, and 100 more policemen were inside, scattered among the audience. The curtain went up at 7:30—right on schedule. The three witches uttered the opening lines of Macbeth, but nobody could hear them over the racket coming from the hecklers, who were seated throughout the audience. When Macbeth—Macready—made his appearance in scene 3, the heckling escalated into booing, which grew louder and louder until finally, at scene 4, act 1, one of the policemen inside the theater gave a signal to those outside and more police stormed in and “closed in upon the scoundrels occupying the centre seats and furiously vociferating and gesticulating, and seemed to lift them or bundle them in a body out of the centre of the house, amid the cheers of the audience.”

By then, thousands of hooligans spoiling for a fight had lined the streets around the theater. Among them was Ned Buntline, there to lead on his boys. They began throwing stones against the theater’s windows on the Eighth Street side, and “the volleys of stones flew without intermission.” Stones smashed through the windows, one hitting the huge crystal chandelier, which broke into a thousand shards. Other stones knocked out streetlamps. Some stones were aimed at policemen, who ran for cover inside the theater, where hecklers were sitting in the cheap (gallery) seats, keeping up “the din within, aided by the crashing of glass and boarding without.” Meanwhile, the crowd outside kept getting bigger. (Newspapers estimated the number at 10,000.)

The theater was under siege, and everybody inside was growing nervous.

The actors keep at it, but at the end of act 2, the theater manager approached Macready “and much frightened, urged me to cut out some part of the play and bring it to a close.” Macready grew angry. “I said that I had consented to do this thing, to place myself here, and whatever the consequence I must go through with it. The audience had paid for so much and the law compelled me to give it; they would have cause for riot if all were not properly done.” Macready got through the banquet scene. When he went down to his dressing room to change his costume, “the battering at the building, doors and windows was growing, and water was running down fast from the ceiling to the floor of my room. The stones hurled in had broken some of the pipes.”

It was time to call out the troops. Around 9:00 p.m., the 200 Greyjackets who had assembled earlier at Washington Square marched up Broadway to Astor Place, to confront the mob. They fired their muskets, first into the air, then into the crowd. Twenty-two (to thirty-one) people died, more than 150 were injured and 117 arrested. And all the while, inside the theater, Macready finished the play. “And in the very spirit of resistance I flung my whole soul into every word I uttered, acting my very best, whilst these dreadful deeds of real crime and outrage were roaring at intervals in our ears.” Then he went to his dressing room and quickly undressed to the sound of soldiers firing on the rioters. At the insistence of a friend, he donned a disguise—some of the rioters, his friend said, were out for his blood—and hurried out the back door and through the crowd. By then, several rioters had been killed. “You must leave the city at once!” his friends told him. At 4:00 a.m. a livery carriage conveyed him to safety in New Rochelle. On May 22, 1849, Macready sailed for England, never to return to America.

The next day—May 11—the major newspapers lambasted the rioters, while pamphlets issued by an unknown group calling itself “the American Committee”—no doubt the work of Rynders and Buntline—flooded the city, urging vengeance for the killings. (“Americans! Arouse, The Great Crisis has come!”) The mayor urged people to stay home and avoid crowds. Rich people, fearing looting, bolted their doors. It took two days before order was restored.

As for Edwin Forrest, he stood to gain from Macready’s humiliation. Therefore, he did not speak out against the actions of the rioters. But neither did he castigate the authorities for their use of brute force. In the end, it worked out well for him: after calm was restored, Forrest received bundles of fan mail congratulating him for winning the contest with Macready.

The Astor Theatre shut down after the riots and reopened the following September. But the affair had sullied not only its name but the surrounding area as well. People joked about the “Massacre Opera House” at “Disaster Place,” and the moneyed people living nearby, on the upper flank of the Bowery—among them John Jacob Astor fils—decided they could no longer stomach a Bowery address. The street’s cachet had already been steadily devolving for the last twenty or so years as New York’s gentry increasingly moved uptown. Or the former were moving a few blocks west to Broadway, the “great promenade and thoroughfare,” wrote Charles Dickens in 1842 in American Notes. He admired Broadway, “that wide and bustling street” with “its glittering shops” and gorgeous ladies. “Heaven save them, how they dress! We have seen more colours in these ten minutes than we should have seen everywhere in so many days!” Broadway, Dickens observed excitedly, was crowded with every kind of vehicle: “hackney cabs and coaches too; gigs, phaetons, large-wheeled tilburies, and private carriages,” driven by “negro coachmen and white; in straw hats, black hats, white hats, glazed cabs, fur caps.” But, he added, move a few blocks over to the Bowery and “the stores are poorer here; the passengers less gay; and the lively whirl of carriages is exchanged for the deep rumble of carts and wagons.”

So in late September 1849, four months after the debacle of the Astor Place riots, a group of wealthy upper-Bowery residents petitioned the Board of Aldermen to rename the section of the Bowery where they lived, which ran from the Astor Theatre to Fourteenth Street. The new name they requested—Fourth Avenue—was outstanding in its blandness. The city elders immediately approved the change, which made the poor Bowery, with its northern section lopped off, suddenly one-third shorter. It was as if the city were cutting off a gangrenous limb, lest the infection spread to parts north.

The Astor limped along for another three years before closing for good.* It was demolished in 1890, and the Mercantile Library erected that lovely brownstone building, now housing condos worth millions, on the site. But on the southern stretch of the Bowery, there remained a vibrant theater scene. In 1852, the Chatham Theatre presented a new play. It was called Uncle Tom’s Cabin, and it changed the world.

Alice Sparberg Alexiou is the author of Jane Jacobs: Urban Visionary and The Flatiron: The New York Landmark and the Incomparable City That Arose with It. She is a contributing editor at Lilith magazine, and she blogs for the Gotham Center. She is a graduate of Columbia University Graduate School of Journalism and has a Ph.D. in classics from Fordham University. She lives in New York.