Deputy Roosevelt and the Case of the Stolen Scow

November 13, 2020
Theodore Roosevelt wore many hats, but did you know he was once a Deputy Sheriff in the Dakota Territory? Read on as author Erin Lindsey recounts a true story about sorely mistaken outlaws who thought they could steal a boat from Roosevelt. Check out the latest book in her Rose Gallagher series, The Silver Shooter which also features the former president in his rugged lawman days.

Once you read, comment below to enter for a chance to win a copy of The Silver Shooter!

Theodore Roosevelt is remembered for many things—so many, indeed, that periods of his life that would feature as headlines in the biographies of lesser mortals are relegated to mere footnotes in his legacy. That’s my excuse, anyway, and I’m sticking to it; it certainly came as a surprise to me to learn that among his many (many) other titles, Theodore Roosevelt was once Deputy Sheriff of Billings County, Dakota Territory.

I knew him as a rugged outdoorsman, of course, and I was vaguely aware of his career as a rancher. But a genuine Wild West lawman? When I stumbled across that golden nugget while researching the Rose Gallagher mysteries, I knew I had to dig deeper—and Reader, I was not disappointed. He served under a sheriff called “Hell Roaring” Bill Jones. He was friends with the legendary Seth Bullock, one-time Sheriff of Deadwood. But my favorite tale involves a boat chase.

But I’m getting ahead of myself. First, a bit of context.

Roosevelt’s Elkhorn Ranch sat on the banks of the Little Missouri River, in present-day North Dakota. In early spring, the Little Missouri could be treacherous, clogged as it was with ice floes, so TR kept a small boat tied to the shore. On the morning of March 24, 1886, he awoke to discover that it had been stolen.

Another man might have let it go, but not Roosevelt. “To submit tamely and meekly to theft or to any other injury,” he wrote, “is to invite almost certain repetition of the offense.” The thieves had to be dealt with, and that meant building a new boat and following them downriver.

Roosevelt figured he knew who was behind the theft: a trio of “hard characters” who lived nearby and had recently been accused of cattle rustling and horse stealing. Their leader, one “Redhead” Finnegan, had endeared himself to the townsfolk of Medora the previous summer by peppering much of the town with rifle fire from his buffalo gun. Since then, he and his confederates had been threatened with lynching, which was probably why they were in such a hurry to leave the area. Roosevelt didn’t expect them to come quietly. But he also reckoned they wouldn’t expect to be chased, which gave Roosevelt and his cowboys, Bill Sewall and Will Dow, time to build a flat-bottomed scow before setting forth on March 30.

The chase wasn’t the stuff of jaunty banjo music. Freezing weather dogged them from the start, clogging the river with ice; progress was slow and grinding and bitterly cold. By the third day, the river was so choked with ice that they couldn’t even shove off until late in the day.

All this, I remind you, for a boat worth no more than thirty dollars.

Eventually, they rounded a bend and found Roosevelt’s boat moored on the bank; from the bushes a little way back, the smoke of a campfire curled into the air.

I’ll let Roosevelt himself take it from here.

“Our overcoats were off in a second, and after exchanging a few muttered words, the boat was hastily and silently shoved toward the bank. As soon as it touched the shore ice I leaped and ran up behind a clump of bushes, so as to cover the landing of the others, who had to make the boat fast. For a moment we felt the thrill of keen excitement and our veins tingled as we crept cautiously toward the fire, for it seemed likely that there would be a brush.”

Luckily, two of the outlaws were off hunting, and the third surrendered immediately. He was tied up and told to keep quiet, and TR and his posse settled down to wait for the others.

“We heard them a long way off and made ready, watching them for some minutes as they walked towards us, their rifles on their shoulders and the sunlight glittering on their steel barrels. When they were within twenty yards or so we straightened up from behind the bank, covering them with our cocked rifles, while I shouted to them to hold up their hands… Finnegan hesitated for a second, his eyes fairly wolfish; then, as I walked up within a few paces, covering the center of his chest so as to avoid overshooting, and repeating the command, he saw that he had no shot, and, with an oath, let his rifle drop.”

Having rounded up their quarry, Roosevelt and his men were now faced with the problem of what to do with them. They were more than a hundred miles downstream of Roosevelt’s ranch and another 150 miles from the nearest town. They were short on provisions and game was scarce. They didn’t even dare to tie the men up; in such frigid temperatures, it might well result in serious injury.

Faced with this dilemma, most westerners of his day would have shot the thieves on the spot, but Roosevelt’s rigid morals wouldn’t allow it. Instead, Deputy Roosevelt opted to pole his prisoners downriver, maintaining a constant guard over them for the ensuing eight days.

The ice jam rarely gave way before noon, and frequently closed up again only a few miles downriver. The current was treacherous; TR and his men had to navigate the craft while keeping a close eye on Redhead, who was “capable of quick and murderous intent”. “There is very little amusement,” Roosevelt declared, “in combining the functions of a sheriff with those of an Arctic explorer”.

At last they sighted civilization, or at least what passed for it in those parts: the C Diamond ranch. Roosevelt hired a wagon, and on April 10—nearly two weeks after departing—he loaded up his prisoners. The rancher drove while Roosevelt followed on foot, rifle in hand. Finally, thirty-six hours later, they arrived in Dickinson, and Roosevelt was able at long last to hand his charges over to the sheriff. He limped out of the sheriff’s office, ragged and bruised and blistered, and found himself a doctor.

“Under the laws of Dakota I received my fees as a deputy sheriff for making the arrests, and also mileage for the three hundred miles gone over—a total of some fifty dollars.”

It is not clear whether he used this bounty to purchase another boat.

Now, I ask you: when you come across a larger-than-life character like that, how can you not put them in your book? The Silver Shooter, a Wild West mystery, features TR in all his buckskinned glory. And if you’d like to hear more about Deputy Roosevelt in his own words, I recommend his autobiography as well as his 1888 book, Ranch Life and the Hunting Trail, both of which are free online.

Enter for a Chance to Win!

Comment below for a chance to win a copy of The Silver Shooter by Erin Lindsey!

The Silver Shooter Comment Sweepstakes: NO PURCHASE NECESSARY TO ENTER OR WIN.  A purchase does not improve your chances of winning.  Sweepstakes open to legal residents of 50 United States, D.C., and Canada (excluding Quebec), who are 18 years or older as of the date of entry.  To enter, complete the “Post a Comment” entry at https://www.criminalelement.com/deputy-roosevelt-and-the-case-of-the-stolen-scow/ beginning at 9:30 a.m. Eastern Time (ET) November 13, 2020. Sweepstakes ends at 9:29 a.m. ET November 27, 2020. Void outside the United States and Canada and where prohibited by law. Please see full details and official rules here. Sponsor: Macmillan, 120 Broadway, New York, NY 10010. 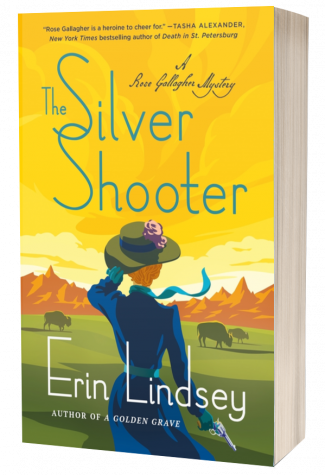 About The Silver Shooter by Erin Lindsey:

It’s the spring of 1887, and Rose Gallagher is finally coming into her own. She’s the proud owner of a lovely little home near Washington Square, where she lives with her mother and friend Pietro, and she’s making a name for herself as a Pinkerton agent with a specialty in things . . . otherworldly. She and her partner Thomas are working together better than ever, and mostly managing to push aside romantic feelings for one another. Mostly.

Things are almost too good to be true—so Rose is hardly surprised when Theodore Roosevelt descends on them like a storm cloud, hiring them for a mysterious job out west. A series of strange occurrences in the Badlands surrounding his ranch has Roosevelt convinced something supernatural is afoot.

It began with livestock disappearing from the range, their bodies later discovered torn apart by something monstrously powerful. Now people are dying, too. Meanwhile, a successful prospector has gone missing, and rumors about his lost stash of gold have attracted treasure hunters from far and wide – but they keep disappearing, too. To top it all off, this past winter, a mysterious weather phenomenon devastated the land, leaving the locals hungry, broke, and looking for someone to blame.

With tensions mounting and the body count rising, Roosevelt fears a single spark will be all it takes to set the Badlands aflame. It’s up to Rose and Thomas to get to the bottom of it, but they’re against the clock and an unknown enemy, and the west will prove wilder than they could possibly imagine…

Erin Lindsey has lived and worked in dozens of countries around the world but has only ever called two places home: her native city of Calgary and her adopted hometown of New York. She is the author of the Bloodbound series of fantasy novels from Ace. Murder on Millionaires' Row is her debut mystery. She divides her time between Calgary and Brooklyn with her husband and a pair of half-domesticated cats.