September 30, 2019
Join author Terrie Farley Moran as she chats with co-writer Laura Childs about their collaborative New Orleans Scrapbooking series, featuring the upcoming Mumbo Gumbo Murder. Comment on the post below to enter for a chance to win a copy of book #16 in the series, Mumbo Gumbo Murder. 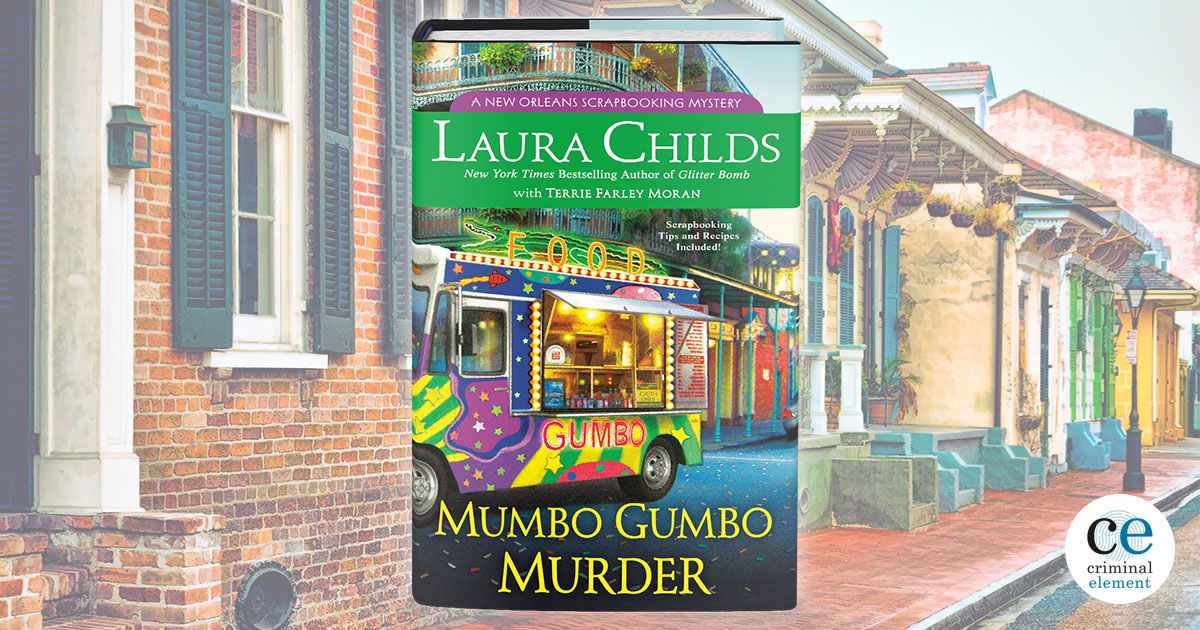 I have been lucky enough to co-write the four most recent books in the New Orleans Scrapbooking series by Laura Childs. I started on Parchment and Old Lace which was lucky (for me) number 13 and now the newly released Mumbo Gumbo Murder, which is the most fun ever, is being stacked on bookshelves in stores and libraries.  I have a few questions I’ve been meaning to ask Laura and I thought you might want to listen in.

Terrie Farley Moran: With all the writing you do, I am amazed you have any time left to read. What are some of your favorite mystery authors? Are there any cozy series that are among your go-to favorites?

Laura Childs: I adore reading thrillers by John Sandford, Michael Connelly, Robert Crais, and Lee Child. As far as cozy series goes, I never miss a book by Cleo Coyle (Coffeehouse Mysteries) or Susan Wittig Albert (China Bayles Mysteries). Those two cozy authors are the best in the business because they know how to kick off a mystery big time in chapter one, add enough twists and turns to keep you guessing, and then end with a bang.

TFM: I can’t say I would disagree with any of those choices. I devour any cozy I can get my hands on. As to non-cozies I am a huge fan of Nelson DeMille, John Grisham and my all-time favorite, Irish writer Ken Bruen.

On to my burning questions. Mumbo Gumbo Murder is the 16th book in the Scrapbooking Mystery series. Even though I am part of the writing process for these books, the ideas are yours, so I have to ask: How do you keep your ideas and characters fresh for each book?

LC: It’s never been a problem. There are so many delicious ways to kill a person, so many crazy disasters that can befall a character, that the really hard part is settling on a single storyline and winnowing it down to just a few judicious plot points.

TFM: I have never thought of ways to kill as being “delicious” but I do get your point. Since the series has gone on for so long, how do you manage to let readers know any backstory without slowing down the current story?

LC: For one thing, Terrie, you and I never make the mistake of putting backstory in the first chapter. Nope, chapter one is reserved for a big, bombshell of a murder. Once the book has opened with an amazing disaster and the characters have revealed a few of their unique personalities, we start to feed in bits and pieces of backstory as we go along. You know what? Readers are smart, they pick up on character’s past lives awfully fast.

TFM: Why did you choose New Orleans as the setting for this series and do you think the setting adds something special to the series?

LC: My husband had the proverbial “army buddy” who invited us down for Mardi Gras a few years ago. Little did I realize that they were also New Orleans “society,” which meant we were granted access to the float dens, partied with float designers, marched in the Mardi Gras parade, and went to the fancy Rex Ball. Lucky, yes? This peek into the inner workings of New Orleans convinced me that it would be the perfect setting for a mystery series. After all, we can’t discount the above-ground cemeteries, haunted hotels, vampire cults, masked balls, spooky bayous, grand architecture, and bad behavior. Lots to work with there!

TFM: You include a lot of craft tips and recipes in every book in this series. What do you think they provide for the readers?

TFM: When you decided to become a writer, how is it you chose the mystery genre? Did you consider any other kind of writing?

LC: I’d been a professional writer for 25 years before I started writing mysteries, so my background included a bit of everything—advertising, screenplays, TV and radio spots, reality TV shows. Because I was a big mystery and thriller fan, writing mysteries seemed like the next logical step. And—knock on wood—I was lucky enough to have Mary Higgins Clark introduce me to editors and even set me up with her agent.

TFM: I understand completely. I am a major fan of short mystery fiction and cozy mystery novels. No surprise that’s what I love to write.

So, readers, not only does Laura Childs think you are smart (see the above answer on backstory) she also thinks it would be a great idea to have a giveaway. Check out the details and leave a comment below to enter for a chance to win your very own copy of Mumbo Gumbo Murder.

We’re not done yet. Doreen Sheridan, wizard of the kitchen, has rustled up one of the fabulous recipes from Mumbo Gumbo Murder and you will find it right here on Criminal Element complete with pictures that are guaranteed to make you hungry. 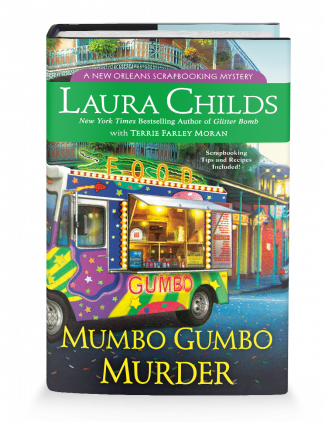 It’s Jazz Fest in New Orleans, and the giant puppets from the Beastmaster Puppet Theatre are parading through the French Quarter. Some are very spooky and veiled, others are tall and gangly, like strange aliens.

As the parade proceeds, Carmela Bertrand and her best friend, Ava, follow behind, down Royal Street and past the food booths. Suddenly, they hear a terrible crash from Devon Dowling’s antiques shop. They rush inside to find Devon collapsed with blood streaming down the side of his face. Has he been shot? Stabbed? 911 is hastily called, and the police and EMTs show up. After the police examine Devon’s body, they tell Carmela and Ava that their friend was murdered with an icepick. They’re shocked beyond belief—and now Mimi, Devon’s little pug, is left homeless.

Carmela and Ava are determined to catch the murderer, but the list of suspects is long. How long do they have before they find themselves on the killer’s list?

Comment below for a chance to win a copy of Mumbo Gumbo Murder by Laura Childs and Terrie Farley Moran!

Mumbo Gumbo Murder Comment Sweepstakes: NO PURCHASE NECESSARY TO ENTER OR WIN.  A purchase does not improve your chances of winning.  Sweepstakes open to legal residents of 50 United States, D.C., and Canada (excluding Quebec), who are 18 years or older as of the date of entry.  To enter, complete the “Post a Comment” entry at http://www.criminalelement.com/delicious-deaths-a-conversation-with-laura-childs-and-terrie-farley-moran/ beginning at 5:00 p.m. Eastern Time (ET) September 30, 2019. Sweepstakes ends at 4:59 p.m. ET October 14, 2019. Void outside the United States and Canada and where prohibited by law. Please see full details and official rules here. Sponsor: Macmillan, 120 Broadway, New York, NY 10010.