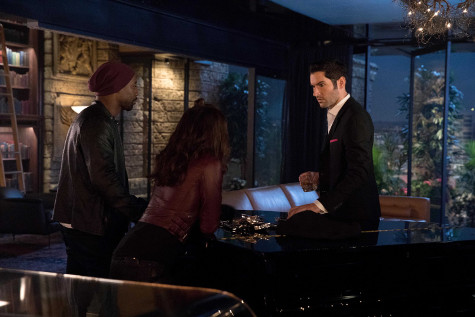 The sword of Azrael returns this week, but angelic weaponry is nothing new to the Bible. In fact, the first appearance of such is at the end of the Garden of Eden story when God “placed the cherubim, and a sword flaming and turning to guard the way to the tree of life” (Gen 3:24 NRSV).

So angels and swords go hand in hand. But we still don’t know much about Azrael. As discussed in other articles, most angels are never given a name. The clear exception to that is Michael. Azrael, attributed as the angel of death in Jewish Mysticism (as Azriel), doesn’t make a named appearance in the Bible.

We do, however, have the angel of death, and she (as the shows specifies “the angel of death is a chick”) makes a very famous appearance in the Exodus story: the tenth plague. The death of the first born is significant not just because it echoes the beginning of the story when Moses was born, but because it clearly changes gears from all of the other plagues. Moses has his mojo going in a pattern. God tells him what to do; Moses takes up the staff and does it. This time, however, there is an elaborate ritual that the Israelites must follow. They have to mark their doors with blood from a sacrifice. When they do this, “the Lord will pass over that door and will not allow the destroyer to enter” (Exo 12:23 NRSV).

The plagues up to this point have all been carpet bombs and strategic strikes. The Nile is turned to blood, frogs swim up, flies, locusts, sick cattle, boils, and even hail affects a very broad population. The last plague is a surgical strike against select targets: only the first born. To ensure that only the first born of Egypt are taken out, the Passover is instituted. To carry out such a strike, it takes a destroyer: the angel of death.

The wording of the passage is also interesting, as it indicates a prohibition. The mark is a promise by God and a means of halting death at the doorstep; otherwise, the destroyer would freely enter and take out every firstborn of Egypt. It remains unsaid, but the angel of death would also target any firstborn Israelite who did not follow the instructions of the Passover. This indicates that not only is the angel of death capable of such destruction, but almost eager for it. God must restrain the actions of this angel.

The show, however, makes an interesting shift as to why this is the case. It’s not Azrael, whom we still haven’t seen or heard from, but the blade that is responsible. Here we have a weapon that “demands to be used to fulfill its purpose.” This suggests that the weapon, while it may not be sentient, may have some kind of will of its own.

Interestingly, this is not the first angelic weapon with its own impetus. Let’s look back at the cherubim and the flaming sword. Until now, I had never closely examined this verse before, but this time I was caught by the wording. To check, I looked at a few different translations, and they’re in agreement. The angels and the sword are not technically together. It’s an easy thing to miss, especially as it makes sense that the angels would be the ones turning the sword to guard the tree. However, that is not what it says. The angels are separate from the sword. The sword itself is flaming and turning to guard the tree.

So far, we don’t see Azrael’s sword moving of its own volition, but then its purpose is clearly different from that of the one from Genesis. That sword is a guardian, protecting the tree, whereas Azrael’s is all about destruction. If the sword does have a will of its own and “whispers in their ears, it beckons to be held” so that it can carry out its function, this changes the nature of the destroyer.

Even though “[Azrael] is no sweet peach,” she would be the restraining force on the blade. Rather than let it run rampant to kill, Azrael must be the one to focus the blade to kill only those it’s supposed to. Azrael’s hand would be the one stopping it from being indiscriminate. Instead, she passes those that obeyed the Passover rite, taking only the Egyptian firstborn.

Of course, none of this could have happened without Mum’s meddling. She literally drew a map for people to find the blade. Her stated reason to bring God down so they could properly mourn Uriel doesn’t hold up. Her logic is flawed because surely if there was enough carnage, Azrael herself would be the one to come and reclaim the blade. And while Amenadiel is convinced that God should not have allowed the blade down on Earth, he neglected the fact that Uriel is the one who brought the blade down with the purpose of killing Mum. Also in this episode, Linda finally comes to terms with Lucifer’s true identity and agrees to treat him again—though she comically insists on knowing how certain people are punished in hell. Chloe continues to want Lucifer to open up, but is looking for something more because of the moment they shared; she even shows a bit of jealousy over Lucifer’s time with Ella. It’s amusing at the end that she wants him to go to church with her, and there may be a hint of something more about her character. Chloe has been showing Lucifer more of his own humanity, but Ella might be the one to convince him to reach out and have a relationship with Dad again.

See also: A Worthy and Otherworldly Adversary: Exploring the Mythology of Lucifer Episode 2.07: “My Little Monkey”