January 15, 2020
Bryan Gruley, author of the new book Purgatory Bay—the sequel to the bestselling Bleak Harbor—offers dark reading suggestions you should consider adding to your 2020 reading list. Honestly, what beats reading about cold-blooded killers on a cold winter's night?

Ever since I discarded the Hardy Boys in favor of H.G. Wells’s War of the Worlds as a grade-schooler, I have embraced the dark. From Ahab in Moby Dick to Alex in A Clockwork Orange to Sophie and Nathan in Sophie’s Choice, I gravitate toward stories that show humans at their most depraved and immoral. In non-fiction, it was Perry Smith in In Cold Blood; in cinema it was Darth Vader and Heath Ledger’s Joker; on TV it was Walter White in Breaking Bad.

Why is this? It’s because, secretly, I’m a serial killer. OK, actually I’m not. As far as you know. Yet. But I have written a few novels with deeply disturbed characters, including my latest, Purgatory Bay. Here I offer a handful of deliciously dark books that belong on your 2020 reading list. They pair particularly well with the long, dark nights of winter.

Speaking of serial killers, My Sister the Serial Killer by Oyinkan Braithwaite is as dark a comedy as a crime fiction author could conjure. Ayoola, Braithwaite’s murderer, unlike so many others in the genre, is blasé and matter-of-fact to the point that you might wonder whether she’s really the one doing the killings. No Hannibal Lecter, she kills not because of some twisted obsession, but out of self-centered convenience. The narrator, her sister Korede, helps Ayoola clean up crime scenes and arguably faces the most moral—or immoral—decisions. Ultimately the sly humor underlying the narrative makes the tale darker, not lighter. It’s as if the author is sneering (in a good way) at the idea of wanton murder as simply a necessary part of everyday life.

There is occasional humor as well in Gabino Iglesias’s rich Coyote Songs, a gory and poetic pastiche of violence and irony that forces the reader to look unblinking at the human tragedies of the U.S.-Mexico border wars, whatever their political persuasion. The novel is shaped as a series of loosely connected stories about characters who plunge themselves or are plunged into the depths of darkness—as one of Iglesias’ characters puts it, a “beautiful chaos.” There’s an artist so uncompromising that she creates a theater of actual murder, “her ghastly visions come to life in an explosion of arterial red.” A mother is described as unleashing “something vicious” inside her that she relishes. A boy surprises himself with his capacity for killing as he avenges his father’s death. Some readers might describe this as horror, but the lush language combined with humans making decisions they believe to be driven by sacred forces make this, for me at least, even darker.

No listing of deeply dark fiction can leave out the classic Red Dragon by Thomas Harris, maybe my favorite thriller of all time. Of course there’s the diabolical Dr. Lecter manipulating psychopath Francis Dolarhyde from afar. But it’s the FBI profiler and hunter Will Graham who takes us by the hand and walks us into the shadowy labyrinth of evil that he reluctantly inhabits—just as we readers do, perhaps with less reluctance. We live vicariously through the tortured Graham without consequence; Graham is not so fortunate, which is what makes him such a fascinating character and guide.

I remember reading the New York Times Book Review piece on William Giraldi’s Hold the Dark and deciding I absolutely had to read it. What grabbed me with such immediacy was a single plot point: the novel is based in a tiny Alaskan town where a certain winter is so cold and barren that wolves emerge from the forest and snatch children from town. Holy God, right? Now, you can discount this because I’m also a fan of jungle documentaries that show bloody-jowled hyenas gobbling wildebeests. But the wolves-eating-kids conceit winds up being tame compared with the rest of Giraldi’s story, which involves an injured military veteran named Vernon returning from a desert war to exact vengeance on enemies perceived and not. “Like grief,” Giraldi writes, “cold is an absence that takes up space. Winter wants the soul and bores into the body to get it.” Language like that makes it easier to digest the twists that bring the story to its disturbing end. Time and again as I read this mesmerizing book, I thought, “WTF was that?” in reference both to what was happening on the page and the sentences Giraldi deployed to render it.

While Hold the Dark slams you early on like a rogue iceberg, Kristen Lepionka’s The Last Place You Look relies upon the steady accrual of character and plot detail to fill you with a growing sense of “please, no, not that” dread. The aptly named first-person narrator, Roxane Weary, is a youngish PI with a taste for alcohol, any kind of alcohol. She starts out looking for one vanished woman, then another, then another, all of them somehow connected. That’s gloomy enough, but in Lepionka’s hands, the darkest recess resides within Weary, a character who makes the debate about “likable” and “unlikeable” characters more pointless than it already is. “I woke at seven in a room thick with darkness,” Weary tells us. “My limbs felt like I had spent the night folded into a metal suitcase.”

Pretty dark in there, I’ll bet. And I’m grateful for it.

See More: Our Review of Purgatory Bay by Bryan Gruley 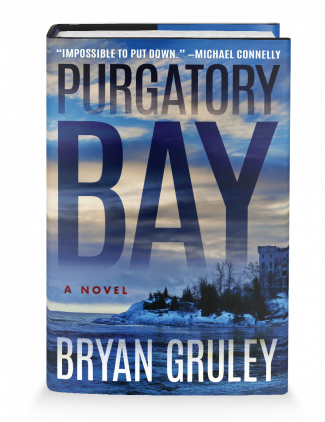 About Purgatory Bay by Bryan Gruley:

Twelve years ago, her life was torn apart. Now those who wronged her will pay.

Jubilee Rathman is a straight-A student and star soccer goalie destined for Princeton—until her family is brutally murdered. Twelve years later, she lives in a virtual fortress on Purgatory Bay near Bleak Harbor, plotting revenge on the people she considers responsible.

In her crosshairs is former reporter Michaela “Mikey” Deming, who Jubilee believes got her family in trouble with the Detroit mob. As retribution, Jubilee kidnaps Mikey’s sister and daughter, and that’s just the start in her ruthless quest for justice.

Bleak Harbor police chief Katya Malone, still reeling from her failure to find a kidnapped boy, leads the investigation. She’s determined to keep history from repeating, but Jubilee is more cunning than Malone can imagine.

All Mikey and Katya can do is follow Jubilee’s dangerous trail of clues. But in Bleak Harbor, nothing is what it seems, and no one can be trusted. As an ominous end draws ever nearer, the women must face the misdeeds of the past to find the kidnapping victims before it’s too late.

Bryan Gruley is the Anthony, Barry and Strand Award-winning and Edgar Award-nominated author of Purgatory Bay (January 14, 2020; Thomas and Mercer), Bleak Harbor, and the Starvation Lake mystery trilogy. A staff reporter for Bloomberg Businessweek and a graduate of Notre Dame, he is also the former Chicago bureau chief of the Wall Street Journal, where he shared in the 2002 Pulitzer Prize for coverage of the September 11, 2001 terrorist attacks.  He and his wife Pam live in Chicago. You can visit him at bryangruley.com.