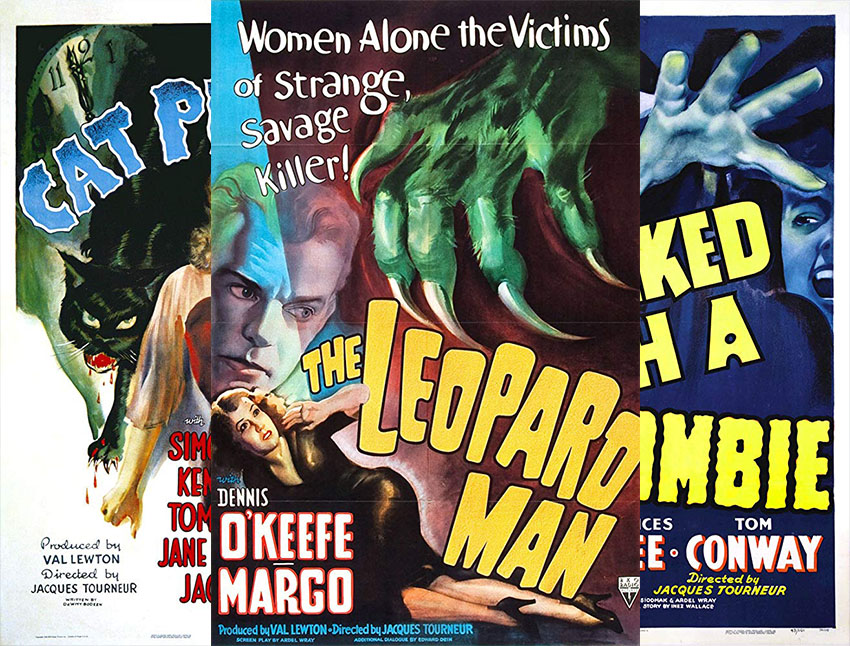 Join Brian Greene as he revisits the trio of horror movies that resulted from the collaboration of Val Lewton and Jacques Tourneur in the early 1940s at RKO Pictures.

In 1942, film industry professional Val Lewton (1904-51) was hired by RKO Pictures to head up its new horror movie initiative. Lewton, who had recently worked for MGM as a writer and personal assistant under studio executive David O. Selznick, was given three rules by RKO as to how he should approach the films he oversaw for them. The movies needed to be made for under $150K, they needed to run no longer than 75 minutes, and RKO would provide the titles up front and then set Lewton and his chosen collaborators free to come up with stories befitting of those titles.

For his first RKO horror feature, Lewton hired Jacques Tourneur (1904-77) to direct. The two men met, and formed an artistic connection, on the set of Selznick’s production of A Tale of Two Cities (1935), on which Tourneur served as a second-unit director. Lewton and Tourneur wound up working together on the first three titles released by Lewton’s RKO outfit: Cat People (1942), I Walked with a Zombie (1943), and The Leopard Man (1943). With Shout! Factory set to release a new Blu Ray edition of The Leopard Man later this summer, it’s a good time for a new consideration of this trio of films, as well as that of the collaborative relationship between Lewton and Tourneur.

In Cat People, the first of the three Lewton/Tourneur collaborations for RKO, we see a clash of cultures, and conflict within parallel worlds. Simone Simon portrays Irena Dubrovna, a Serbian native currently living in New York City and working as a fashion illustrator. As Irena–an unconventionally attractive woman who is an enigmatic loner—explains to Oliver Reed (played by Kent Smith), an engineering draftsman who becomes her love interest and ultimately her husband, she is haunted by a legend from her native village. The locals from her birthplace are said to have once came under the spell of an evil-worshiping group who ruled them and turned them into satanic cat people. Irena fears she is one of the cat people herself, and because of this, she has difficulty in letting herself go fully into her relationship with Oliver. Meanwhile, Oliver has a female co-worker who is a good friend to him and possibly more, and Irena’s awareness of their closeness adds to the already almost unbearable tension within the early days of her marriage to Oliver.

What Lewton and Tourneur did in Cat People, was use basic human emotions and transform them into exaggerated, supernatural forms that transcend normal human life. On the surface, the feature is a suspenseful horror film about a troubled woman who may or may not become a bloodthirsty panther when agitated. But what’s really at the heart of the lead character’s motivations are basic, relatable human feelings such as romantic jealousy, fear of sexual intimacy, an uphill battle to escape her past, and a worrying awareness of a lurking, dark part of her inner self. The brief movie is dreamlike and frightening, yet is told in a subdued way. The makers of the captivating film show us only what we need to see, and give us the space to figure out the rest.  Cat People was shot on a very small budget and wound up being a massive financial success. It’s a fascinating watch.

The Lewton/Tourneur follow-up to Cat People is a different kind of story from the one told via its predecessor, yet it shares some of Cat People’s core themes. I Walked with a Zombie also involves culture clashes. Frances Dee plays Betsy Connell, a conscientious Canadian nurse who takes on the assignment of traveling to the Caribbean island of Saint Sebastian and helping a local doctor there tend to a woman suffering from a mysterious ailment. The stricken patient—who has no diagnosable malady yet is in a semi-catatonic state that has her carrying on like a member of the walking dead—is part of a wealthy white family that owns a sugar plantation in the area, which is largely inhabited by descendants of African slaves.

Another similarity between the two films is that a love triangle comes into play in both. We learn early into I Walked with a Zombie that the problems in the family of the ill woman got started when she and her brother-in-law—a single man who is currently an embittered heavy drinker—had some kind of romantic episode in the past. Naturally, the woman’s husband didn’t appreciate this, and somehow the quarrel between the two brothers brought on the zombie-like condition of the patient.

Well, actually, this tale includes a love quadrangle, because the pretty, thoughtful nurse falls for the suave, melancholia-minded husband of the ill woman. Driven by unconditional love that’s similar to that felt for the character of Oliver Reed by his adoring co-worker in Cat People, the nurse is determined to help bring the patient back to her normal self, so that her grieving husband will be happy again. The turning point of the story comes when the nurse, frustrated that she and the doctor can’t do anything for the afflicted woman, becomes convinced to turn the case over to a resident voodoo priest/witch doctor.

Despite its shock-inducing title and paranormal elements, I Walked with a Zombie is, like Cat People, propelled by some basic human complexes: jealousy, lovesickness, sibling rivalry, a mother’s fierce protection of her children, one’s fear that their inner demons will cause them to harm others, and how social stratification and cultural differences can create divides between groups of people. Lewton instructed the film’s writers to model the script after Charlotte Brontë’s famed 1847 novel Jane Eyre. He also asked them to study Haitian voodoo practices. The resulting product, once channeled through Tourneur’s directorial vision, is a unique, mesmerizing, supernatural suspense film that was made quickly and cheaply, yet has lasting quality.

The Leopard Man, the final title in the Lewton/Tourneur trilogy, has much less in common with the first two features in the series than those two do with each other. But its title alone connects it to Cat People to an extent. Based on Cornel Woolrich’s 1942 novel Black Alibi, this is the one Lewton/Tourner release that is–possibly–a murder mystery. Set around a New Mexico nightclub, the story’s conflict begins to unfold when a publicity stunt gone wrong at the club results in a wild black leopard being set loose in the local town. A young girl is mauled to death, and now all the town residents are on edge and the police and other hired hands become determined to locate and silence the deadly beast. But before they can accomplish that, two other young women are killed. Only, some people aren’t entirely convinced that the second and third killings were actually done by the leopard, and wonder if there is a human murderer who did those deeds and let the cat take the blame. So now there is a second search going on in the town, this one for a human killer.

The Leopard Man isn’t quite the mini-masterpiece that both Cat People and I Walked with a Zombie can be called. Yet it’s a well-made horror/mystery film that, like the other two titles in the Lewton/Tourneur series, is highly suspenseful and nightmarishly frightening at times. It’s also admirably economical, with no lagging scenes over its briskly-passing 66 minutes. And it showcases a colorful set of characters that includes night club performers, a fortune teller, and other memorable individuals who become part of the tale.

When considering all the clashes of cultures in these titles, it’s interesting to note that both Lewton and Tourneur were living and working in America then, but that both were originally from other parts of the world. Lewton was born in Russia and his family moved to the U.S. when he was five, having spent a few years in Berlin in between. Tourneur was a Frenchman who left Paris for the States with his filmmaking father when he was 10, and who at times went back to France to make movies during his professional career. So both men had first-hand experience with the kinds of geographical displacement and cultural difference experienced by the characters in their collaborative cinematic works.

There is some question as to whether Lewton or Tourneur was the stronger creative force when they made films together. Normally we give most of the credit (or derision) to the directors of movies than we do the producers. But Val Lewton was not your average movie producer. It’s clear that he was very much involved in the development of all three scripts, and that some of his own personality is stamped onto the features. At the same time, these three titles are hardly the only notable films Jacques Tourneur directed. If you’re a film noir fan and you haven’t seen his Out of the Past (1947), your movie-viewing life is woefully incomplete.

Whatever thoughts anyone has on whether producer or director deserves more of the credit for Cat People, I Walked with a Zombie, and The Leopard Man, there can be no question as to the quality and lasting merits of the trio of films. All three are haunting, imagination-engaging efforts that stand out as being unique cinematic works that are within film genres whose other titles often suffer from too much sameness.